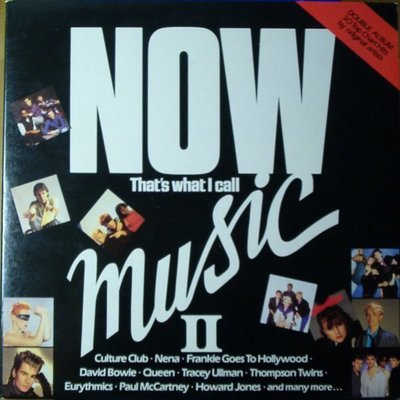 Review
A record stays at number one for five weeks and they don’t play it on Top Of The Pops. This has got to be good. With a birthday coming up I asked for and received 19 inches of Frankie action. Eight years later The Sugarcubes hummed about sticking around for joy; back in the spring of 1984 Relax hung around the charts like a menacing minder.

Its inclusion on Now That’s What I Call Music II ensured that the masses got to hear it. Side 3, track 1. Nicely sequenced before the Eurythmics’ Here Comes The Rain. Thirty years may have passed since then but this remains my second favourite ever Now album. Early 1984 was a bleak time in Ireland; the weather was quite grim (coming off the back of a harsh winter) and austerity seemed to be permanent. The charts were fantastic though and this compilation really nails it – a proper mixture of the sunny and serious with the emphasis firmly on the latter. It’s worth noting that compiler extraordinaire Ashley Abram is now on board.

There are four number ones here which is as many as reached the chart summit during the period since the first volume. The aforementioned Relax, the Flying Pickets covering Only You and the cold war-tinged 99 Red Balloons and Pipes Of Peace. Tracey Ullman and Madness make their second successive appearance with the moody My Guy and somewhat sinister Michael Caine.

Other curveballs on the compilation included Snowy White’s arresting Bird Of Paradise, Carmel’s sprightly More, More, More and Julia & Company’s funky Breakin’ Down (Sugar Samba). All three seem to have slipped through the cracks of pop history but they’re immortalised here. If you prefer more traditional fare then look no further than Joe Fagin plus a cracking Big Country ‘n’ Slade sequence.

This 12 year old was particularly taken by the third side as ploughed a more melancholic and introspective furrow. China Crisis’ Wishful Thinking was a particularly brooding track while Fiction Fictory’s (Feels Like) Heaven and The Smiths’ one and only appearance – What Difference Does It Make? – just seemed on another level. I could see the indie signposts ahead.

The Smiths – What Difference Does It Make?

Missing tracks and other thoughts
The VHS release included nine tracks that did not appear on the main album.
Victims and Doctor, Doctor ended up on Now 1 and Now 4 respectively.
Tina Turner’s Help reached #40 and is the worst track on Private Dancer.
Status Quo’s Marguerita Time and Marilyn’s Cry And Be Free can be found on the 1985 Band Aid Special CD (a Japanese release featuring artists who sung on the project).

Icicle Works’ Birds Fly and Bourgie Bourgie’s Breaking Point were new singles at the time of release; neither reached the top 40.
Kajagoogoo – The Lion’s Mouth. “We’re very normal people whereas Limahl likes the bright lights”. They never appeared again but Limahl’s Never Ending Story lit up Now 4.
Shannon’s Let The Music Play is the strongest of this motley bunch and spent 15 weeks on the chart. It would have fitted very well instead of Joe Fagin.

Other songs that could have featured include:
Kool and The Gang’s Joanna and the Style Council’s My Ever Changing Moods. See Now 10th Anniversary 1984 for the former.
Perhaps a novelty number would have been nice. In the spring of 1984 you could choose from Roland Rat, The Fraggles or Alexei Sayle.

Here’s the Music Week advert from March 1984. Thanks to David Hannah for sharing. 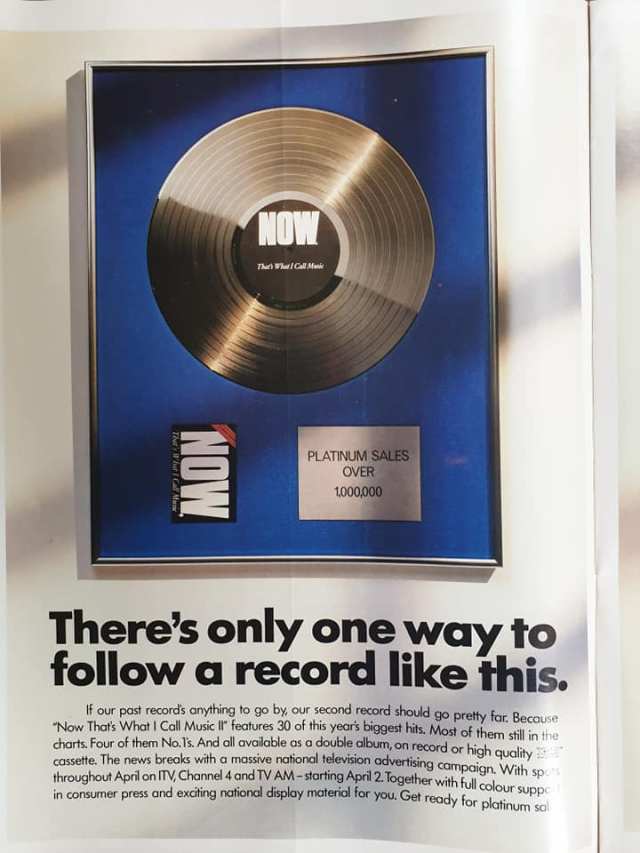