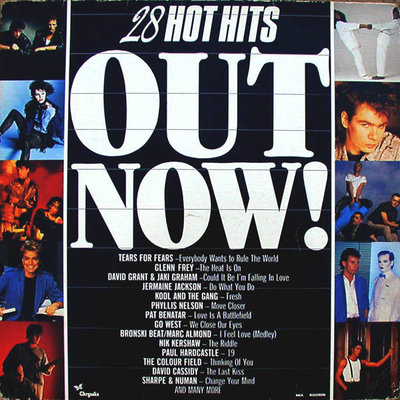 Review
Chrysalis and MCA entered the compilation ring in May 1985 with the release of Out Now! It was a 28 track double LP which emerged one month after the second Hits collection. It’s a worthy chapter in this ongoing story and features a decent collection of spring hits with a sprinkling of top 75 scrapers.

We get two gold medallists; Paul Hardcastle’s 19 was a shoe-in given that it was a Chrysalis release while Phyllis Nelson’s slow-burner Move Closer is still a slow-set slayer almost 30 years on. Two more top 3 hits were Tears For Fears’ grandiose Everybody Wants To Rule The World and Bronski Beat’s inventive fourth single I Feel Love. Getting in on the soundtrack action was Glenn Frey’s The Heat Is On from Beverly Hills Cop while I still dig Go West’s overwrought We Close Our Eyes.

The first record contains the more serious muscle. There’s a four track sequence of red-blooded lust – David Grant and Jaki Graham’s ostensibly sweet Could It Be I’m Falling In Love which is followed by the smooth yet firm Do What You Do from Jermaine Jackson and the Ziploc Kool funk of Fresh before some le grind [Move Closer]. The zombie song that cannot die ends side 1 – Love Is A Battlefield which already got savoured by the wolf on Hungry For Hits.

It’s the leftfield choices that really make Out Now! worth a purchase. There’s the uplifting optimism from Terry Hall and The Colour Field [Thinking Of You] along with unexpected rockabilly from Kim Wilde [Rage To Love] and Killing Joke’s haunting Love Like Blood. You also get The Damned in full-on goth mode and Tom Petty’s acid-tinged wonderland paean Don’t Come Around Here No More.

Nik Kershaw’s unstoppable run of singles-on-various-artists-compilation-albums continues with the oddball jigs and reels of The Riddle. To this day I still don’t know what he’s on about. Curiouser and curiouser as April’s Hits 2 included Wide Boy which was released after The Riddle.
Near a tree by a river / there’s a hole in the ground / where an old Man of Aran / goes around and around.

Another late 1984 chart entry Lay Your Hands On Me [The Thompson Twins’ lead-in single from their fourth album Here’s To Future Days] is also included here. Words just vanished in the haze. Bonus ethereal points to David Cassidy for the mesmerising Last Kiss. Equally affecting are Sal Solo’s #52 smash Music And You and Change’s soothing Let’s Go Together.

The eclectic nature of Out Now! is best exemplified by the following quartet:
Billy Bragg’s Between The Wars – austere and cutting. Respect to the miners.
Godley and Crème’s Cry. Ageless heartache for the under-age boozer in me.
New Edition’s Cool It Now. Teenage party jam!
The Kane Gang’s Gun Law. Mysteriously bombed. Ended up in Miami Vice.

Favourite tracks
Thompson Twins – Lay Your Hands On Me

The Colour Field – Thinking Of You

Lest we forget
Nik Kershaw – The Riddle

Missing tracks and other thoughts
So what about these gems?

Smiley Culture – Police Officer. Endlessly entertaining. May not have slotted into a Hits or Now but would have hit the mark here.
Toy Dolls – Nellie The Elephant. Novelty punk with a grotesque spindly singer. Deserves to be remembered.
King – Won’t You Hold My Hand Now. Thoughtful and introspective follow-up to Love and Pride.
Sheila E – The Belle Of Saint Mark. This is the bomb; often aired post-midnight on RTE Radio 2. A song from under the sheets.

This entry was posted in Out Now. Bookmark the permalink.