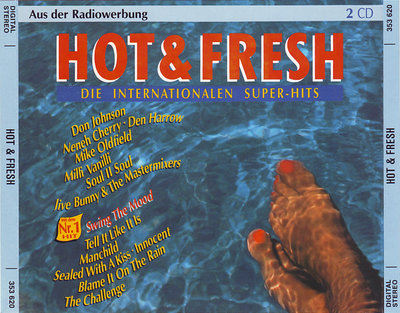 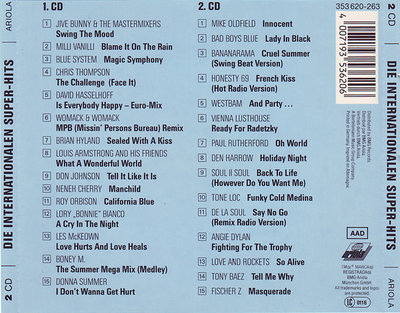 Review
The second Hot And Fresh compilation of 1989 is cut from a similar cloth as its predecessor. We are served up a selection of recent international hits ranging from the obvious [as compiled on UK series] and the less well-known [tracks that featured in the European charts].

Produced by the father and son DJ team of Andy and John Pickles, Swing the Mood was a cut and paste record which fused a number of early rock and roll tracks with liberal use of Glenn Miller’s In the Mood. It topped the UK chart for five weeks during July and August 1989 and was the second best-selling single of the year. You never hear it now. Milli Vanilli’s midas touch continues with the slick R&B of Blame It On The Rain. No matter what way you spin it, Milli Vanilli is part of your life when living in the late 1980s / early 1990s. Embrace it. Recognise it. All part of pop’s rich tapestry.

All stand for Blue System’s Magic Symphony: pumping international disco. I didn’t know what to make of Chris Thompson’s The Challenge (Face It). Co-written with Harold Faltermeyer and official theme for Wimbledon 1989. Boris Becker beat Stefan Edberg 6-0, 7-6, 6-4 while Steffi Graf prevailed in the ladies’ singles. The single didn’t chart in the UK. David Hasselhoff continued to make bad records [the inane Is Everybody Happy] while Womack and Womack’s MPB is deadly dull. Jason Donovan’s cover of Sealed With A Kiss hit #1 in the UK, Ireland and Finland during June. Here Brian Hyland’s 1962 version is paired with Louis Armstrong’s What A Wonderful World. Oldie heaven but the idyll is ruined by Don Johnson’s mediocre Tell It Like It Is. Miami Vice had just come to an end.

1989: the summer that just keeps on giving. Neneh Cherry followed up Buffalo Stance with the equally fine Manchild. Haunting. The ghost of Roy Orbison stalks us in the eerie California Blue. A late night car stereo favourite. Equally suited for the midnight hour is Lory “Bonnie” Branco and her heartfelt A Cry In The Night. Les McKeown’s Love Hurts And Love Heals is somewhat formulaic while Boney M. roll back the years with their Summer Mega Mix. Remixed by Pete Hammond. Sunny times. And now for the Queen of my youth – Donna Summer. I Don’t Wanna Get Hurt is another perfect single from the flawless Another Time And Place. The best SAW album ever.

Innocent is a fantastic pop single from Mike Oldfield. It is from the album Earth Moving and features vocals from Anita Hegerland. Like a rash, Bad Boys Blue come crashing in with the romantic disco of Lady In Black while the Nanas’ Cruel Summer ’89 benefits from Jacquie’s input and Freddie Bastone’s swing beat remix. To the clubs; Honesty 69 pitch up Lil Louis’ French Kiss into something extremely hot while Westbam’s And Party bears the quintessential house sound of the era. It’s time for some crazy classical beats with the aptly-monikered Vienna Lusthouse and the storming Strauss-tinged Ready For Radetzky. Also launching a solo career was FGTH’s Paul Rutherford. Oh World is a wonderful song with simple and universal message. Great garage vibes too. It’s a mystery to me why it bombed at #61 in the UK.

To Den Harrow and Holiday Night, a piano-driven escapist anthem and Ku club favourite. Back To Life is the perpetual London club classic and fresh forever. Also hot in the cities were De La Soul’s Say No Go and Tone Loc’s Funky Cold Medina. A pair of dope jams. Anyone for (more) tennis? Angie Dylan’s stirring Fighting For The Trophy was the official US Open song for 1989. Boris Becker and Steffi Graf also won the singles titles. Ex-Bauhaus dudes’ Love And Rockets career high point was So Alive. It’s got a menacing feel; a real dark entry. Elswehere Tony Baez’s Tell Me Why sounds like Simon Climie fronting INXS and remixed by Teddy Riley. Lastly it’s the turn of British rock band Fischer-Z to give us their world view with the bizarre Masquerade. An appropriately oblique conclusion to a most interesting compilation.

Love and Rockets – So Alive

This entry was posted in Hot And Fresh. Bookmark the permalink.