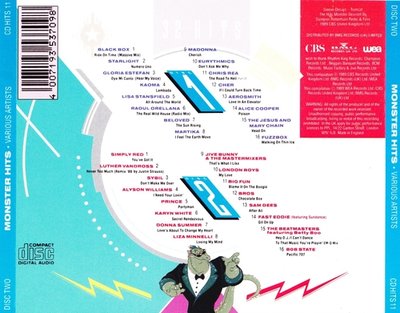 Review
“And time won’t take my love away”.

Black Box were fronted by a Guadalupean model Katrin Quinol. The members of the group included Daniele Davoli [a DJ], Valerio Semplici [teacher of the clarinet] and Mirko Limoni [The Wizard]. Ride On Time was number one for six weeks – the longest stint since I Just Called To Say I Love You [September / October 1984]. The entire length of secondary school. The song sampled Loleatta Holloway’s 1980 hit Love Sensation on an uncredited basis. Holloway’s legal team fought back and won a settlement. A re-recording of the song with uncredited vocals by Heather Small was released as Ride on Time (Massive Mix) with the original version pulled from distribution. We stay with Italina house for the next track: Starlight’s pounding piano-led beast Numero Uno shared the Black Box production team and reached #9 in September 1989.

So the eleventh Hits album has a funny name. Ridicule is nothing be ashamed of. The monster on the front cover was a type of reptile in a suit. Now 16 won the Christmas battle of the compilations but Monster Hits is no slouch / grouch. The grooviness continues with international flavour – Gloria Estefan’s jaunty Latin buster Oye Mi Canto (Hear My Voice) and Kaoma’s Brazilian rhythms of Lambada. I have huge affection for Lisa Stansfield’s All Around The World; hatched in Rochdale, the home of Lancashire dance music. Global stardom and universal success. Now for an enticing combination of hot-blooded flamenco meeting piano rhythms – it’s Raoul Orellana’s Real Wild House; a bug-eyed sunrise anthem. Which leads us to The Beloved atmospheric Balearic classic The Sun Rising.
“Love is just a state of mind…that we leave behind…”

This magnificent seven sequence comes to a end. Martika’s cover of Carole King’ I Feel The Earth Move is a gritty shaker. The big pop sound continues with Madonna’s first appearance since The Hits Album 6. Cherish is another ace from her 10/10 LP Like A Prayer. We Too Are One was the Eurythmics’ seventh album and used copies can be found all around the world. Don’t Ask Me Why is chilling end-of-decade stuff:
“You spoiled the best years of your life,
You took them all again,
Now you think that you’re forgiven,
But you can’t be born again”.

The Road To Hell (Part 2) saw Chris Rea break into the UK top 10 after 11 years of trying. It’s marvellous stuff, a stark road movie on vinyl. From Mask to Moonstruck, Cher was back with a vengeance. If I Could Turn Back Time rocks out with a hotter-than-hot promo video. It sits easily with Aerosmith’s tongue-in-cheek Love In An Elevator and Alice Cooper’s trashy but compelling Poison. There’s a quick switch to more indie pastures with the Jesus and Mary Chain’s irresistable Head On [which the Pixies would cover on Trompe Le Monde]. I saw them live that autumn. The Top Hat in Dun Laoghaire and supported by The Perfect Disaster. Then there was a rush across the city to catch Primal Scream in Trinty College. Disc 1 ends with Fuzzbox’s heartbreaking but beautiful cover of Yoko Ono’s Walking On Thin Ice. Ra-ra skirts and perms. So 1989.
“Cause we’re young and we’re reckless”. (Taylor Swift – Blank Space)

Part 2: Love is in the air. We start with Simply Red and You’ve Got It. It was written with Lamont Dozier and is more suited to Valentine’s Day rather than the cold October evenings of drive time radio that we heard on the bus home from college. The King of Swoon and Croon Luther Vandross updated his 1983 #44 semi-smash Never Too Much with able assistance from Justin Strauss to make unlucky #13 while Sybil’s groovy version of Don’t Make Me Over continued to keep the Bacharach / David flame alive for the new generation. The R&B train continues with Alyson Williams’ old time grinding classic I Need Your Lovin’, Prince’s box office-busting Partyman and the upfront soul queen Karyn White [Secret Rendezvous].

In a few weeks time the hills will be alive to sound of the new Donna Summer box set. Another Place and Time will finally get the reissue it deserves. Love’s About To Change My Heart was the third single lifted from this super LP and is top notch pop with fantastic melodies and a massive chorus. Liza Minnelli also released her finest work in 1989 – the dynamic Results. Stephen Sondheim’s show ballad Losing My Mind originally featured in the musical Follies. This version comes with an additional vocal from Neil Tennant with Julian Mendelsohn and the PSB team on production duties. It’s awesome and chilling in equal measures. That’s entertainment.

For the last lap we are booked by Danno and jived by Rotherham rabbits. That’s What I Like was lapped up by the British public and provided Andy Pickles and Ian Morgan with their second number one. From bunnies to bendy men: The London Boys. The somewhat forgettable My Love was released the week before Monster Hits. It didn’t set the charts alight, instead floundering at #46 during the Christmas rush. Next are Big Fun who relight their disco fires with Blame It On The Boogie. And the Gosses are back with a bang: the sleeve notes tell us they are going from strength to strength after their US tour with Debbie Gibson “bestride the pop world like twin collossuses”. Hand on a second – Chocolate Box hits the high notes but it’s no Drop The Boy. And #9 was their worst showing to date.

“The soul release of 1989″. So said Blues and Soul about Sam Dees’ After All. I think it’s a mixed grill – a meaty vocal with a rather stringy arrangement. Things can only get better with Fast Eddie and Sundance Chi-Town representing. Git On Up. Hip house for the breakers to cut some rug on. Rhythm King unleashed a 19 year old rapper named Betty Boo who ranted about the crap the old DJs were caning on the radio. A #7 chart placing alleviated her anger. Finally Manchester. So much to answer for. November saw the seminal Top of The Pops appearance from both The Stone Roses and the Happy Mondays. The compilers didn’t really get into the Madchester groove until 1990. Aside from the genius who had the immaculate taste to end disc 2 with a lush instrumental otherwise known as Pacific State. Or Pacific 707. By 808 State. Published by Perfect Songs Limited. Indeed. The final comedown. Word.

The Beloved – The Sun Rising

Donna Summer – Love’s About To Change My Heart (Edit)

Lest we forget
Fuzzbox – Walking On Thin Ice

Missing tracks and other thoughts
Don’t be fooled by the crazy mixed up marketing – Monster Hits is a great ride. On the outside looking in are these:

This entry was posted in Hits series. Bookmark the permalink.