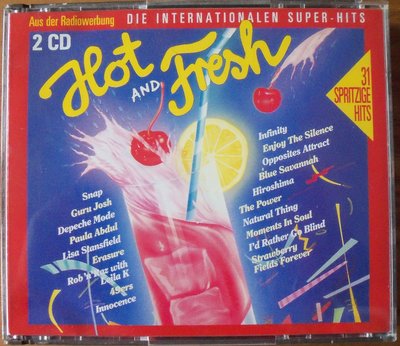 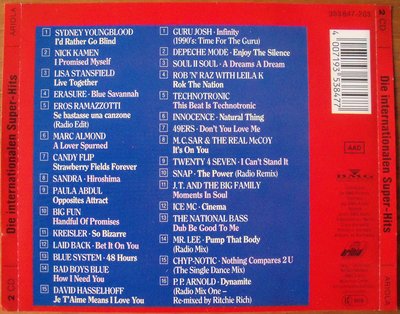 Review
The third Hot And Fresh compilation was the last to be released in a fatbox. Just in time for the early summer nights of 1990. Volume 4 would follow later on in the year.

Sydney Youngblood’s sensuous I’d Rather Go Blind continued his downward trend of chart placings [UK #44 – after If Only I Could #3 and Sit And Wait #16]. It’s grown on me since then. A jangle and a strum: it’s the return of Nick Kamen and the gorgeously bittersweet / upbeat combo I Promised Myself. A mysterious bomber – limping to #50 in May 1990. It was playing the pub at the start of my worst drunken night. Omen? And then you have Lisa Stansfield singing Live Together. Proper pop with a divine vocal. Erasure squeeze out another excerpt from Wild! with the sublime Blue Savannah while the easy vibe of Eros Ramazzotti’s Se Bastasse Una Canzone brings back memories of our continental holiday that coincided with the early stages of the World Cup.

A Lover Spurned has been put forward as a possible Bond theme. Marc Almond’s delivery is perfectly satisfactory but it lacks fizz. Thankfully Candy Flip step up to the mark with their cool-as-fuck cover of Strawberry Fields Forever. Complete with Amen break. It’s in the same mood as the Beatles original namely drug-influenced psychedelic grooves, the freedom and happiness bongs. Lie back, take a tote and be happy. The comedown: Sandra’s Hiroshima, the mournful war lament before Paula Abdul has us eating out of her hand as she funks it up on Opposites Attract. A Handful Of Promises was Big Fun’s difficult third single but the boys pull it off with joyful aplomb; one of SAW’s hidden gems.

The final third of the first half is a run through Euro trash. Kreisler’s So Bizarre sound like an unplugged Depeche Mode while Laid Back’s Bet It On You is unapologetic PBOR [Patrick Bateman Oriented Rock]. Didi forever? No, not even he can save the pedestrian 48 Hours. We are blue, the system is broken. The Bad Boys Blue restore balance with the confessional synth of How I Need You complete with Human-stylings before The Hoff rides into town on a horse called Je T’Aime Means I Love You. It falls at the first fence.

Thankfully the second disc is wall-to-wall club tunes. Guru Jush’s heady Infinity (1990’s Time For The Guru) is a rush both visually and aurally. Observe the joy and euphoria. Savor the jazz break. March 1990 was Violator’s time; Depeche Mode’s perfectly-realised masterpiece. Enjoy The Silence was phenomenal, an epic synth call-to-arms. A hymn as the coffin drops into the earth. And so it was a new decade. For Soul II Soul this meant a follow-up to the groundbreaking Club Classics Volume 1. Volume II was more Balearic in heart. A Dream’s A Dream is a hot and soulful groover sung sung blue by Victoria Wilson-James. Paling in comparison are the workmanlike Rok The Nation and This Beat Is Technotronic. Nice overalls on Leila K though.

Innocence and Natural Thing. Wind down the weekend with this chilled out beast. More hair and fewer worries. Elsewhere the 49ers Don’t You Love Me samples Jody Watley and remains a fun party tune. Another Bridge Hotel memory from that summer. Saturday night cruise. Beat on the street with MC Sar and The Real McCoy’s funky It’s On You while it’s over to Holland for Twenty 4 Seven’s I Can’t Stand It complete with MLK vox.
“I’m the lyrical Jesse James”.
Time for Snap and The Power, a killer old-skool diamond with an unforgettable rap. A deserved UK #1.
“I will attack and you won’t want that”.

JT and The Big Family meld the Art of Noise into something incredibly dope with Moments In Soul. Edgy spoken word female action. Ice MC dedicates Cinema to John Wayne, Eddie Murphy, Fred Astaire, Kim Basinger and others. A one trick pony of sameness. No Endless Art. The Natural Bass cover Dub Be Good To Me in a rather faithful style which isn’t very exciting but Mr Lee’s Pump That Body works out our sweat into a sweet hip house style. Chyp-notic’s version of Nothing Compares 2U sounds awful on first listen but gradually gets under the skin. Quality beats and jazz interlude. Finally we blast home with some swingbeat – PP Arnold’s Dynamite remixed by Ritchie Rich. Zoom.

Chyp-notic – Nothing Compares 2U (The Single Dance Mix)

Nick Kamen – I Promised Myself

Lest we forget
Big Fun – A Handful Of Promises

This entry was posted in Hot And Fresh. Bookmark the permalink.