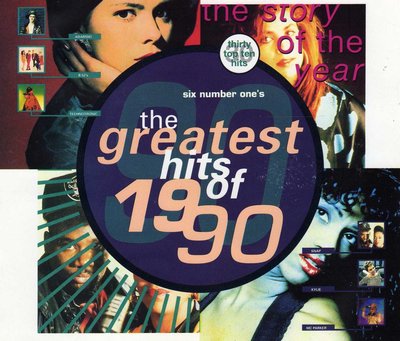 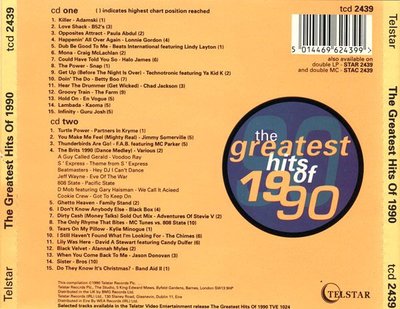 Review
The sleeve for The Greatest Hits Of 1990 proudly boasts of having six number ones. Leaving the misplaced apostrophe aside, it’s worth pointing out that one of them originated in December 1989 and straddled the Christmas / New Year period. As was the norm by now, the bulk of the tracks would also have featured on rival series such as Now That’s What I Call Music, Smash Hits Party! and The Hits Albums. Nevertheless this is a solid overview of the year with a decent mix-up of pop and dance tracks. It’s good to see Kylie and Jason [not licensed to Now and Hits during this period] with a few other tracks that have slipped into the mist.

Adamski leads the way with Killer, the follow-up single to N-R-G. Our first introduction to Seal and it spent a whopping 18 weeks on the chart. US bombers to the fore – The B-52s and the bouncy Love Shack before the funky Opposites Attract, Paula Abdul’s collaboration with MC Scat. Then there’s one of SAW’s finest jams, Lonnie Gordon’s swirling Happenin’ All Over Again. Back to the old school for Lindy Layton who played Callie in Grange Hill during the 1980s. She now guests on Beats International’s dub re-working of the SOS Band’s Just Be Good To Me. Ex-Neighbours star Craig McLachlan didn’t go with SAW for the pumping rock of Mona. It did the chart business anyway.

“Down in that place
Defending your faith
With nowhere to hide
You’re out on your own
Sleeping in stone
Hunting the kick inside”.
Halo James briefly shone as teen pop idols when Bros and Brother Beyond were recording their second albums. The band’s name was a spoof of the comic book character Halo Jones and their debut LP, The Witness, was released to very positive reviews in 1989. Could Have Told You So was released just before Christmas and has a “last hurrah of the 80s” feel along with a haunting vocal and downbeat lyrics.

The remainder of disc 1 on dance action. Snap and The Power, a Turbo-powered diamond with a smokin’ rap. It’s followed by Technotronic’s Get Up – which sounds like more percussive and funkier version than the usual single mix. Step aside for Betty Boo’s infectious Doin’ The Do and Chad Jackson’s dope Hear The Drummer Get Wicked. Keep the groove on for The Farm. Terry Farley worked his magic on Groovy Train and along with Primal Scream’s Loaded and Come Together 7″ mixes, became one the baggy shuffles of the summer. Elsewhere there’s En Vogue’s ultra-fresh mission statement Hold On and Kaoma’s Brazilian sexy dance sensation Lambada. Lastly the prophetic Guru Josh who told us that 1990 was “the time of the Guru”. The euphoric Infinity reached the top five.

Like their green, half-shelled subjects Partners In Kryme came from nowhere to top the charts with the charming rap of Turtle Power. Stephen Hague produced Jimmy Sommerville’s upbeat cover of Sylvester’s You Make Me Feal Mighty Real. F.A.B. remixed Gerry Anderson’s Thunderbirds theme with an unlikely MC in the form of Lady Penelope’s chauffeur Parker. Their album Power Themes ’90 was also released on the Telstar label and included remixes of many 1960s ITC series such as The Prisoner, The Saint, Department S and The Persuaders. And Joe 90 of course. The whole project was a precursor to the mid 1990s lounge revival and revived interest in cult television themes.

The Brits 1990 (Dance Medley) was a megamix featuring some of the major contenders for the Awards. You got Double Trouble and The Rebel MC’s Street Tuff, A Guy Called Gerald’s Voodoo Ray, S’Express’ Theme From S-Express, Beatmasters’ Hey DJ I Can’t Dance, Jeff Wayne’s Eve Of The War, 808 State’s Pacific State, D-Mob’s We Call It Acieed and Cookie Crew’s Got To Keep On. Meanwhile The Family Stand’s soulful Ghetto Heaven remains of the year’s best tracks with its eerie Twin Peaks sample while Black Box’s second single I Don’t Know Anybody Else showcases their well-produced house sound. Then there’s Stevie V’s Dirty Cash, an awesome blast of beaty hip house and killer samples. And some lightning fast machine gun delivery from MC Tunes along with old friends 808 State propelled The Only Rhyme That Bites into the UK top 10.

Kylie’s fourth number one was Tears On My Pillow which appeared on the soundtrack to The Delinquents. It’s followed by The Chimes’ soulful reboot of U2’s I Still Haven’t Found What I’m Looking For. The Eurythmics’ David A Stewart [guitar] and Candy Dulfer [saxophone] created the beautiful instrumental Lily Was Here which appeared in the film De Kassière. The dark mood continues with Alannah Myles’ brooding Black Velvet before slipping back into teen pop mode with Jason Donovan’s endlessly catchy When You Come Back To Me. Next is Sister, an extraordinary ballad from Bros [Craig had left by this stage]. It’s a touching tribute to Matt and Luke’s stepsister Carolyn who was killed in a collision with a drunk driver. London 1988.

Favourite tracks
Halo James – Could Have Told You So

Jason Donovan – When You Come Back To Me

Missing tracks and other thoughts
It’s another decent selection from Telstar although I would like to have seen these three:

Del Amitri – Nothing Ever Happens. Epic maudlin style.
Luciano Pavarotti – Nessun Dorma. For Italia ’90.
Stone Roses – One Love. Spike Island and all that.

This entry was posted in Greatest Hits Of. Bookmark the permalink.