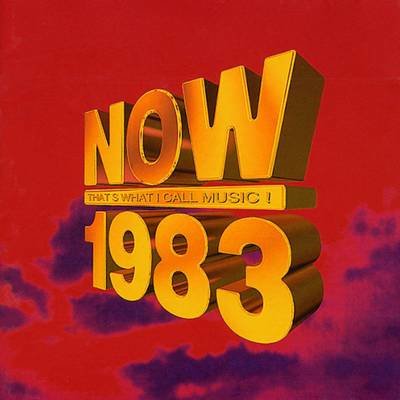 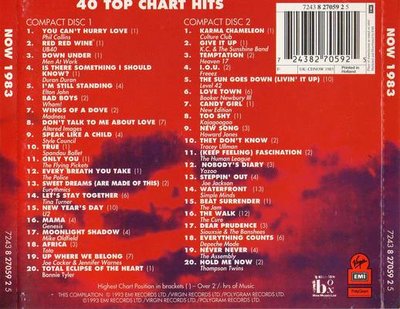 Review
“In an instant I remembered everything”.

The Now series turned 10 in 1993. To mark the occasion, the labels decided to release a series of compilations containing the hits of each year. These double CD sets started in August with Now That’s What I Call Music 1983. The inlays contained notes on each track along with advertisements for forthcoming volumes. In this particular case our appetite was whetted with tracklists for 1984, 1985, 1986 and 1987. The first set was eagerly awaited as 1983 had only produced one Now album and there were a lot stray tracks that need to be rounded up. It was also one of pop’s perfect years so we were in for a real treat. And Ashley does not disappoint.

We start with four chart toppers. Just like Now That’s What I Call Music, Phil Collins’ You Can’t Hurry Love is the opening track. This stomping Supremes cover arrived in late 1982 and knocked Rene and Renato off their perch in January 1983. It’s followed by another cover, UB40’s version of Neil Diamond’s Red Red Wine before Men At Work’s breezy Down Under. And then Duran Duran’s storming Is There Something I Should Know. So far, a dead ringer for the first Now. Time for a detour: Elton John’s summer smash I’m Still Standing with the memorable south of France video setting. Wham! had a successful year with Bad Boys reaching #2 while Madness’ uplifting Wings Of A Dove became their 15th hit and topped the Irish charts. Remember the food fight on the flight? Good times.

The story of the year continues with Altered Images and the cracking synth pop of Don’t Talk To Me About Love. I haven’t seen the video for years but it all floods back as soon as I view it. Paul Weller appears twice here; firstly with his new band the Style Council and Speak Like A Child. A fantastic modern soul sound. It’s back on the #1 trail with Spandau Ballet’s timeless True which featured on the “For information only. These were the other number ones of 1983” blurb on the first volume. Another came from The Police, the creepy voyeurism of Every Breath You Take. In between are The Flying Pickets and their acappella take on Yazoo’s Only You. This ended up on Now That’s What I Call Music II.

Sweet Dreams (Are Made Of This) catapulted Eurythmics to stardom in March 1983 while Tina Turner’s career was re-ignited by the Martyn Ware-produced cover of Let’s Stay Together. It was also the year that U2 broke into the UK top 10; New Year’s Day did the trick with its haunting piano. Genesis are next but in a curious twist it’s not That’s All. Instead we are treated to the full album version of Mama. Epic stuff. Next is Mike Oldfield and the evocative Moonlight Shadow. I can remember hearing it for the first time – somebody’s radio in Higgins’ strawberry field. To the US then: Toto’s memorable soft rock classic Africa. In the Ritz cinema An Officer And A Gentleman was a big draw; not for me but Up Where We Belong from Joe Cocker and Jennifer Warnes has stayed in the memory. Another ballad closes CD1; Bonnie Tyler’s powerful Total Eclipse Of The Heart.

Karma Chameleon was the best-selling single of 1983. It spent six weeks at the top while Culture Club ended up having seven consecutive top five singles between 1982 and 1984. One of the big summer records was KC and The Sunshine Band’s Give It Up. An feelgood vibe with an irresistible chorus for those scorching days. Meanwhile Temptation proved to be Heaven 17’s zenith with Carole Kenyon’s soaring vocals sealing the deal. The blinding Brothers In Rhythm Remix from 1992 proved to be equally successful and can be found on Now That’s What I Call Music 23. Also burning up the dancefloor were Freeez and their crossover smash I.O.U. This was also included on the first Now’s accompanying VHS.

We stay off piste for two more songs. There’s some catchy Brit funk from Level 42 and The Sun Goes Down (Livin’ It Up) while Booker Newbury III’s Love Town is a late period disco gem. Time for five consecutive tracks that all appeared on the sole Now album of 1983. There’s New Edition’s saccharine Candy Girl; a Jackson 5 for the 1980s. Payment in the form of a VCR and some cash. Limahl was still fronting Kajagoogoo in February and the swooning Too Shy went all the way. Elsewhere Howard Jones’ debut single New Song is still one of the era’s brightest lights while the Human League’s (Keep Feeling) Fascination remains one of their most innovative 45s. Stuck in the middle is Tracey Ullman [the voice of the first Now ad] and her poptastic cover of They Don’t Know. “Baby!”

“My head was so full of things to say,
But as I open my lips all my words slip away”.

Nobody’s Diary was the sole 45 from Yazoo’s second and final LP You And Me Both. It’s a poignant electro track and the duo would shortly part. There’s a postscript below. Joe Jackson’s atmospheric Steppin’ Out comes next, a song to play before you hit the town. Sparkle In The Rain saw Simple Minds on the cusp of a stadium rock breakthrough; Waterfront was the big single. Come in / come out. Note: unlike the original Now That’s What I Call Music edit, there is no sticks intro on this version. It’s a case of out with the old for Weller – The Jam’s Beat Surrender was their final single and entered the chart at #1 in December 1982. It was still in the top 10 during January 1983, hence its inclusion.

It’s a case of same band, different track for The Cure. The Walk pre-dated The Love Cats by three months and saw them break the top 20 for the first time. Dance until your heart bursts. Unfortunately my local disco always played the latter. The alternative sequence continues with the whimsically brilliant cover of Dear Prudence by Siouxsie and The Banshees. And there’s more: Everything Counts, Depeche Mode’s compelling and melodic portrayal of business Britain. Vince Clarke was the band’s former vocalist who went on to form Yazoo. After their break-up he hooked with ex-Undertone Feargal Sharkey and called themselves The Assembly on their beguiling Never Never which was also included on the Now 1 video. As was the closing song: Hold Me Now from the Thompson Twins. They wrote the song after resolving a heated argument. This hypnotising swaying groove reached #4 in December and also ended up on the second Now album.

“You say I’m a dreamer, we’re two of a kind,
Both of us searching for some perfect world, we know we’ll never find”.

Favourite tracks
The Cure – The Walk

Altered Images – Don’t Talk To Me About Love

Lest we forget
The Assembly – Never Never

Missing tracks and other thoughts
The first entry in the 10th Anniversary series is an exhilarating ride. The earlier volumes were always bound to be more desirable given that many of the tracks had originally been compiled on vinyl and cassette only releases. In this case Ashley Abram had to select the correct mix between songs that had already appeared on the first Now album while stretching the net further to round up the other numbers that helped shape the pop story of 1983. The balance is struck between 16 tracks from Now That’s What I Call Music, two more off Now That’s What I Call Music II and 22 others. A 40 song allocation was considered generous and remained in place for the rest of the series.

Now 1 proudly boasted of containing “11 number ones”. Nine of them are included here with Rod Stewart’s Baby Jane and Paul Young’s Wherever I Lay My Hat missing the cut. The latter was previously been included on another Box Music Limited compilation called The 80s – The Album Of The Decade – with no early fade unlike the version on the Now album. There are a total of 13 chart toppers on Now That’s What I Call Music 1983. The additional ones consist of two of the “missing five” – True and Every Breath You Take – along with Beat Surrender [#1 in December 1982] and Only You, the Christmas #1 of 1983.

The sequencing is excellent with a thoughtful selection of memorable songs across the spectrum. The last five tunes on the second disc are particularly enjoyable while it’s also good to re-acquaint ourselves with diamonds like Bad Boys, Don’t Talk To Me About Love and Nobody’s Diary. There’s not much that I’d change although it would have been quite a coup to get Paul McCartney and Michael Jackson’s duet Say Say Say. And Lionel Richie also deserves a place on the pitch for All Night Long (All Night). While it peaked at #2 it ended up in the top 10 of the year’s best-selling singles and shifted more copies than half a dozen #1s. One more? Slade’s twilight stand with the hard-rocking My Oh My.