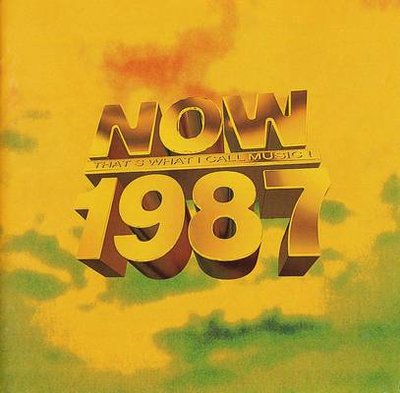 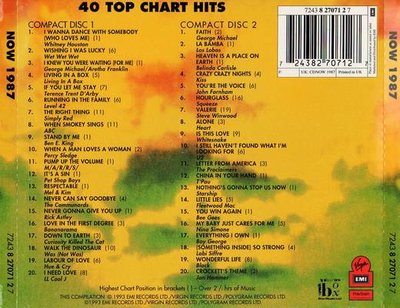 What’s unusual about Now That’s What I Call Music 1987 is that the first five songs all appeared on their rival’s The Hits Album 6 while the sixth managed to miss out being included on any compilation during the year. Whitney Houston’s storming and uptempo I Wanna Dance With Somebody (Who Loves Me) is a suitably powerful opening song that went down well with The Justified Ancients Of Mu-Mu. Wet Wet Wet’s super-confident debut Wishing I Was Lucky still sounds bright and sparkly today while I Knew You Were Waiting For Me ends up showcasing George Michael’s versatility and ability to steal the limelight. Two more equally convincing first 45s were Living In A Box’s self-titled smash and Terence Trent D’Arby’s soul blast If You Let Me Stay.

So you have to wait until track 7 to hear something from the year’s two Now LPs – Simply Red’s The Right Thing which is one of a quartet of Now That’s What I Call Music 9 numbers. It’s preceded by Level 42’s magnum opus Running In The Family with ABC’s soul-tinged When Smokey Sings coming afterwards. It was the era of “good” badminton and jeans adverts: two in a row from Ben E. King [Stand By Me] and Percy Sledge [When A Man Loves A Woman]. Three #1s come next: the knitted-samples of Pump Up The Volume, Mel and Kim’s joyous Respectable and the Pet Shop Boys’ overblown It’s A Sin.

Never Can Say Goodbye saw the Communards returning to the disco sound of the 1970s. The Gloria Gaynor reached #4 and was originally compiled on Now That’s What I Call Music 10 along with Hue and Cry’s wine bar pop Labour Of Love and Bananarama’s game-upper Love In The First Degree. Also emerging from the SAW stable was Rick Astley whose Never Gonna Give You Up catapulted him to stardom and five weeks at the top of the UK charts. Curiosity Killed The Cat sprang forth in December ’86 with the blue-eyed pop of Down To Earth while Was (Not Was) showcased their super 70s soul sound with Walk The Dinosaur. Finally there’s some real love from LL Cool J; the hip hop ballad.

George Michael leads the charge on CD2 with the title track of his stunning debut album. Faith produced six singles; the title track was the second, a short sharp future funk shock. It’s followed by a part of chart-toppers, La Bamba and Heaven Is A Place On Earth. The latter peaked in January 1988 and was originally compiled on Now That’s What I Call Music 11. We rock out with Kiss and Crazy Crazy Nights while John Farnham’s You’re The Voice follows, a raw live version that I’m still unsure of where’s it taken from. Or is it a rare error like Opportunities? Meanwhile there’s Squeeze’s slight return Hourglass and Steve Winwood’s uplifting 1982 classic Valerie to keep the momentum going.

Alone: a beautiful piano sound and an awesome video. The gold standard in the power ballad genre. We stay with the big hair as Whitesnake’s Is This Love creeps up like a light-footed stalker. U2 are next; The Joshua Tree dominated my turntable during the spring of ’87. I Still Haven’t Found What I’m Looking For. I saw The Housemartins live in 1987; they were supported by The Proclaimers whose Letter From America crept into the charts just before Christmas that year.
A memory: “Back back you Irish dogs” shouted Stan Cullimore from the stage. Cue glasses and bottles flying towards the stage. A friend of mine got locked up for kicking a squad car. The folly of youth. And cider”.

More smash hits: China In Your Hand and Nothing’s Gonna Stop Us Now. The latter hung around the radio as I frantically crammed for my Inter Cert while the T’Pau tune will forever be associated with the exam results. Fleetwood Mac’s Little Lies is next; Tango In The Night yielding six of the best 45s. It was also their last top 10 hit in the US. The Bee Gees struck gold with You Win Again, the opening track on The Hits Album 7 while Nina Simone makes a surprise chart entry with My Baby Just Cares For Me – courtesy of a perfume advert. Elsewhere Boy George launched his solo career with a chart-topping cover of David Gates’ Everything I Own. Dad tribute rock.

It’s a somewhat downbeat finale. Labi Siffre’s (Something Inside) So Strong is an enduring anthem, a defiant plea that’s remained in the public consciousness ever since. Black’s Wonderful Life broke the top 10 at the second attempt; the original [on the Ugly Man label] stalled at #72 the previous year but the success of The Sweetest Smile encouraged A&M to give it another chance. The iconic music video was shot in black and white around the English seaside resort of New Brighton. In the 1990s it helped Cadbury’s sell Strollers and Standard Life push insurance. We close with a brooding instrumental: Crockett’s Theme by Jan Hammer, taken from the Miami Vice episode Calderone’s Return: The Hit List (Part 1). And a few years later the National Westminster bank used it. No escape.

“Guess who I saw by your old house just the other day
That kid we used to think was mad, but now he looks okay
I think someone’s here, look out the window, I can’t make out who
Oh I’d love to stay but I’ve really got so many things to do”.

Belinda Carlisle – Heaven Is A Place On Earth

U2 – I Still Haven’t Found What I’m Looking For

Lest we forget
LL Cool J – I Need Love

Missing tracks and other thoughts
Now That’s What I Call Music 1987 is an impressive run through of the year’s hit singles and more than makes up for the anemic bouts of lethargy on the 1986 set. Both CDs are frontloaded with big tunes [Whitney Houston and George Michael face-off] while putting Ben E. King and Percy Sledge together is a nice touch. Disc 2’s closing stretch is aptly melancholic with a killer closing triple punch from Black, Labi Siffre and Jan Hammer.

16 of the 40 tracks were compiled on 1987’s Nows: four from Now 9 and a dozen from Now 10. There’s also one tune that was complied on Now 11 [Heaven Is A Place On Earth]. The Hits series had a purple patch with 14 songs taken from volumes 6 and 7 while The Proclaimers’ Letter From America ended up on Smash Hits Party ’88. An impressive eight numbers missed out on being included on the canon UK compilations of the year: Running In The Family, When A Man Loves A Woman, It’s A Sin, Walk The Dinosaur, Faith, Valerie, I Still Haven’t Found What I’m Looking For and Wonderful Life.

1987 saw the record companies take an initial maintain-the-position stance with the CD format. That meant truncated single disc releases for Now That’s What I Call Music 9 and The Hits Album 6. The CD version of the latter is a perfect example of cherrypicking power; what’s interesting is that of the 10 Hits 6 songs featured here, eight of them were on the shiny disc. There was a sea-change during the second half of the year and the winter compilations saw equal billing across vinyl, cassette and CD. Hallelujah!

20 tracks held the #1 position in 1987 and 12 of them are compiled here while Jackie Wilson’s Reet Petite was already snapped up on Now That’s What I Call Music 1986. And don’t forget that Belinda Carlisle’s Heaven Is A Place On Earth reached the summit on 16 January 1988 and is on CD2. Of the others, a Michael Jackson no-show was inevitable while Madonna’s pair, La Isla Bonita and Who’s That Girl, were never in the running. Star Trekkin’ is the only absentee from the top 10 best-sellers of the year. For me, the main omissions are Suzanne Vega’s chilling Luka, Five Star’s perfecto funk of The Slightest Touch, something from Prince [Sign Of The Times was a massive LP for me] and George Harrison’s solid groover Got My Mind Set On You. Cider memories.