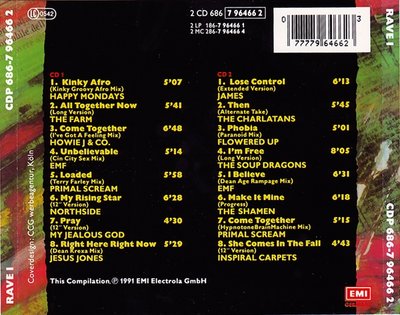 Review
“A heaving mass of baggy jeans and coloured tops with a cloud of puff hanging above”.

Rave I was released by EMI Electrola in 1991 as a television-advertised Madchester / baggy compilation. The twist: it was German and primarily concentrated on 12″ mixes. A perfect and comprehensive document of the scene does not exist; there are too many fragmented elements and other sounds that drifted in and out but remain essential parts of the story. Other pieces of the jigsaw include Happy Daze, Rave. Beechwood’s Forever Changing from 1991 and Jon Savage’s recently released Perfect Motion on Caroline True.

First off the factory production line is Kinky Afro (Kinky Groovy Afro Mix). It’s my preferred choice of Happy Mondays shuffle, ideally while wearing a donkey jacket. An immense trailer for the era-defining hedonism of Pills ‘N’ Thrills And Bellyaches. The Farm follow, the communal joy that is All Together Now in long form. Max Howarth and David Johnston were Howie J and Co. Come Together (I’ve Got A Feeling Mix) is a languid cover of The Beatles track that slipped under everybody’s radar. Two bands appear twice: EMF and Primal Scream. The squelchy Cin City Sex Mix of Unbelievable is a blast; I last danced to it at some party on the South Circular Road back in late ’91.

Inevitably Loaded checks-in. We get the Terry Farley Mix that was on the second 12″ release, CRE 070X. An apple a day, purple and green: Northside’s second single My Rising Star – appearing in 12″ guise – is marvellous, an understated epic produced by Ian Broudie. Like This Charming Man, it didn’t appear on the Chicken Rhythms LP. Another top tune is Pray by My Jealous God. Three singles and no album; wicked guitars and snotty vocal delivery. Disc 1 concludes with Jesus Jones’ signature tune Right Here Right Now. The Dean Krexa Mix gives it a muddy overcoat but a much more danceable feel.

Fair play to the compilers who have looked beyond the obvious for the opening brace of tracks on CD2. Instead of Sit Down or Come Home for James, we get the atmospheric Lose Control (Extended Version). And The Charlatans are represented by Then (Alternate Take) which was on the b-side of the 12″ single. That particular release was memorable for the mispressing where Taurus Moaner appeared twice. Anyway, this version of Then has a beefed-up acid house groove and is way superior to the original. Next are London’s Flowered Up, another crucial but short-lived part of the scene. Phobia (Paranoid Mix) is a dubby sound and very different to the standard version. The Soup Dragons’ I’m Free slides in; eight minutes of tie-dyed optimism complete with ragga section in the middle.

EMF #2: It’s I Believe (Dean Age Rampage Mix). A nicely frantic production with great hooks. The 7″ ended up on Now That’s What I Call Music 19. The momentum continues with The Shamen and the radical V1.0 – Progress mix of Make It Mine; a hypnotising cracker. Back to Primal Scream and their next step towards Screamdelica. Come Together emerged five months after Loaded and the 12″s reached the shops in August 1990. Once again, it’s the lesser known but superb HypnotoneBrainMachine Mix or CRE 078X. This wonderful trip ends with the swirling organ sound of the Inspiral Carpets and She Comes In The Fall. The 12″ purchased on 30 June 1990 along with James’ Gold Mother LP. Come home, play records, watch Argentina beat Yugoslavia 3-2 on penalties after a 0-0 draw.

The Charlatans – Then (Alternate Take)

Lest we forget
My Jealous God – Pray (12″ Version)

This entry was posted in Dance non-UK. Bookmark the permalink.