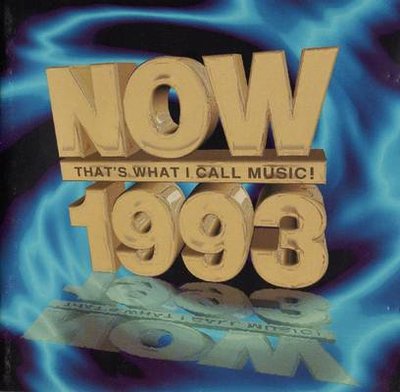 I fully expected Now’s 10th Anniversary series to stop with the 1992 edition. In a curious twist, the compilers made a decision to release Now That’s What I Call Music 1993 while the year still had three months left to run. The number of tracks dropped from 40 to 37 [which was more in line with the usual main releases] and there was also a double vinyl version. Essentially this compilation is a Best Of January – August 1993 and draws heavily from the two Now albums that had already been released that year.

Freddie Mercury continues to lead the way with Living On My Own which was remixed by No More Brothers and hit #1 in August. It was knocked off its perch after two weeks by the dazzling Eurodance of Culture Beat’s Mr Vain. Tania Evans on vocals; this would also be picked up on Now That’s What I Call Music 26 later that autumn. Continuing the one theme are 2 Unlimited with the pounding No Limit while Urban Cookie Collective’s infectious The Key, The Secret was a crucial dance track of the late summer. The rhythms keep moving on Sub’s Ain’t No Love (Ain’t No Use) with its fine Melanie Williams vocal and Ace Of Base’s worldwide smash All She Wants Is. Beat it and eat it.

Any 1993 compilation needs a dancehall section. So we get Snow’s excitable Informer followed by Inner Circle’s joy-in-repetition Sweat. And then it’s a quick shuffle to Bitty McLean’s It Keeps Rainin’ (Tears In My Eyes) before the dessert of Shaggy’s hooded groover Oh Carolina. Slide away with short hair and hoopy earrings – it’s Gabrielle’s gorgeous Dreams. A song that makes you wonder what you’ve been doing these last 22 years. Equally poptastic is East 17’s Deep, one that’s so evocative of the time. Their rivals Take That follow with the romantic slush of Why Can’t I Wake Up With You.

Robin S brought Show Me Love to the clubs where it was road-tested before finally cracking the chart in April. It was also featured on Now That’s What I Call Music 24. Other team-members include Sister Sledge’s cracking We Are Family (Sure Is Pure Remix), West End featuring Sybil’s plaintive The Love I Lost and Cappella’s epic trance monster U Got 2 Know. Also crossing over to the top 20 were Aftershock and the seductive house jam Slave To The Vibe. Meanwhile DMC’s Phil Kelsey revived and remixed one of the biggest ever disco and karaoke numbers – Gloria Gaynor’s I Will Survive. And with that, disc one concludes with Snap’s circular mood piece Do You See The Light (Looking For).

Annie Lennox’s epic Love Song For A Vampire is just the tonic after the predominately dance-driven first half. It’s followed by Tina Turner’s resigned but powerful I Don’t Wanna Fight and KD Lang’s thoughtful Constant Craving. Duran Duran’s windswept comeback hit Ordinary World makes gives this a Now 24 start-of-disc-2 feel. Meanwhile San Francisco’s 4 Non Blondes created their own slice of history with the wistful What’s Up? We rock on with the garish Ugly Kid Joe and Cat’s In The Candle before the searing Lenny Kravitz tune Are You Gonna Go My Way. 1993 was Suede’s to own; building on the back of The Drowners and Metal Mickey with the glamorous Animal Nitrate. Fabulous Tivoli gig.

There’s no escaping Young At Heart. Shout is a Now That’s What I Call Music 25 mash-up while The Shamen’s Phorever People is jammin’ bliss. Love action on Yes day: Utah Saints’ wicked Believe In Me followed by the original of the species, Heaven 17’s remixed Temptation. The Stereo MCs’ Step It Up was another late ’92 stormer. Next come The Beloved and the blissed out Sweet Harmony. It’s a sedate closing pair: envelop yourself in Sade’s simmering, electrifying ballad No Ordinary Love. And finish with Lisa Stansfield’s soaring ballad In All The Right Places. From Indecent Proposal. “Sugar, I swear”.

Lenny Kravitz – Are You Gonna Go My Way

Lest we forget
Aftershock – Slave To The Vibe

Missing tracks and other thoughts
Now That’s What I Call Music 1993 is a strong compilation but it’s difficult to see why the compilers thought it necessary. The double LP is a nice item to own though. They would repeat the same trick during the next two Septembers, 1994 and 1995. No vinyl for ’95.

18 tracks are lifted from Now 24 with a further eight from Now 25. That alone gives it an over-familiar taste. Meanwhile Temptation appeared on Now That’s What I Call Music 23. The other sources: Hits ’93 – Volume 2 [Why Can’t I Wake Up With You] and Hits ’93 – Volume 3 [In All The Right Places]. Don’t forget that Now Dance The Best Of ’93 had not yet been released; it would snap up this quintet – The Key The Secret, Slave To The Vibe, Do You See The Light (Looking For), Phorever People, Believe In Me while Smash Hits ’93 would lay claim to It Keeps Rainin’ and Animal Nitrate. There’s nothing here that can’t be found on the main UK compilations of the era. So file under cool but only for completists.