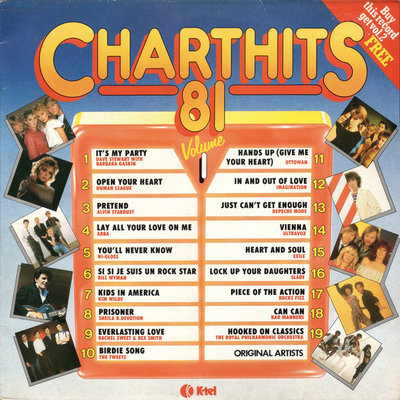 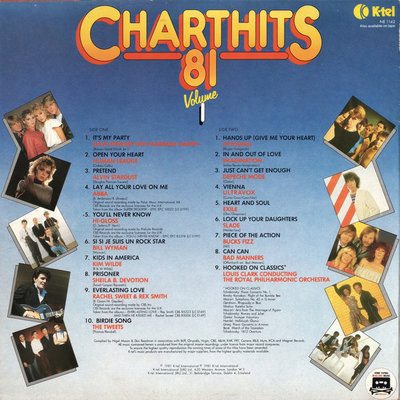 Review
“There was one of the gang, who had Scalextric
And because of that he thought he was better than you.”

1981 was the Christmas of Race and Chase. It had been launched by Matchbox in 1978 and featured a Bandit car and an American police car. The unique feature of this set was that the cars could u-turn, and jump using a tilting bridge. Hours of fun. Elsewhere my record collection had only just begun and would not have any further additions until after The Big Snow (our massive snowfalls of January ’82). For neighbours and relatives of a slightly older vintage, the top seller was Chart Hits ’81, a gift from K-Tel. Like Ronco’s earlier effort, Super Hits, this was a BOGOF which retailed at a higher price than was usual for a single LP. Some great reward: 38 sensational tracks were crammed into its grooves.

Even though it was meant to represent the full year, there are just two overlapping songs with previous compilations namely Bucks Fizz – Piece Of The Action and Shakin’ Stevens – This Ole House which both appeared on the aforementioned Super Hits.

The most comprehensive review of Chart Hits ’81 can be found on Then Play Long. It’s a fascinating piece, although a little sniffy in the assessment of the contents – particularly the unrealistic comparison between the NME’s top 20 singles of 1981 versus the tracks on K-Tel’s compilation. Enough; time to drop the needle on side one. So it begins on a folky trip. Spirogyra’s Barbara Gaskin teams up with prog man Dave Stewart (note no A) for a hypnotic cover of Lesley Gore’s It’s My Party. Four weeks at the top of the charts and the video containing a cameo by Thomas Dolby as Johnny. Second billing goes to the Human League and their Dare taster, the joyfully wistful Open Your Heart. Designated Blue.

For the next while it’s gloriously inconsistent. Alvin Stardust’s anodyne Pretend zips by in 2:38. Next comes the sleek robotic sheen of ABBA’s Lay All Your Love On Me. An early fade of 3:51 vs 4:32. Still amazing. More: Hi-Gloss and You’ll Never Know, a late period disco vibe screaming sunshine. Then there’s Bill Wyman’s cheesy ‘n’ continental Si Si Je Suis Un Rock Star before Kim Wilde’s arrival, the storming drama of Kids In America. Wind it back with Sheila’s lacklustre Prisoner. Were B. Devotion involved at this juncture? Rachel Sweet and Rex Martin’s ham-fisted take on Everlasting Love and the nightmarish future (The) Office horror of The Birdie Song wrap up the remainder of the first quarter.

“This is war” intoned Chris Morris on The Day Today where Ottawan’s Hands Up was used for comedic effect. I listen now and revel in its simplicity. Marvel at the wonderful Swain and Jolley magic on Imagination’s breathless In And Out Of Love while cursing the truncation. Meanwhile Depeche Mode cast a synth spell on the addictive rush of Just Can’t Get Enough. Next comes the glacial Vienna, Ultravox’s defining moment of sparse piano and naked isolation. Uncut. For inspiration, check out the first four songs on The Walker Brothers’ Nite Flights LP. Midge Ure continually cites The Electrician as a major influence.

You can dance: Exile’s Heart And Soul sees the Kentucky troubadours throw a final rock dice before going country. Elsewhere Slade urge us to Look Up Your Daughters but are merely treading murky water before their real comeback. After the pop rush of Bucks Fizz’s Piece Of The Action, Bad Manners unleash their bawdy version of the Can Can. Energy flash. Lastly some culture: Louis Clark and The Royal Philharmonic Orchestra’s 7″ version of Hooked On Classics. Sing it: Piano Concerto No. 1 / Flight Of The Bumble Bee / Symphony No. 40 In G Minor / Rhapsody In Blue / Karelia Suite / Aria From The Marriage Of Figaro / Romeo And Juliet / Trumpet Voluntary / Hallelujah Chorus / Piano Concerto In A Minor / March Of The Toreadors / 1812 Overture / Symphony No. 9.

Forever Michael: Volume 2 launches with a 1975 throwback. Jacko’s sickly ballad One Day In Your Life, the soundtrack of a thousand true life stories, released to cash in on Off The Wall’s momentum. I love it. Motown begets Motown with Smokey Robinson’s smooth jam Being With You. Feel the quality on Squeeze’s ode to moribund living, Labelled With Love. But it couldn’t last. Tight Fit return with a second 60s medley which is almost worse than the summer’s Part 1. Puke: High In The Sky / Mr Tambourine Man / Proud Mary / Oh, Pretty Woman / Sherry / Big Girls Don’t Cry / Yes I Will / Stay / Needles And Pins.

Obscurity knocks for Gerard Kenny on the inexplicable rock tune(less) Outlaw. I’ve also put it on You Tube so you can judge for yourself. The same for Charlie Dore’s lightweight You Should Hear, also a hit for Melissa Manchester under a slightly different title. Hazel O’Connor’s moody cover of The Stranglers’ Hanging Around works well though and carries off that early 80s nightclub vibe with aplomb. It crashes into REO Speedwagon’s hokey 50s pastiche In Your Letter which is quickly forgotten as Madness drive the point home on the frantic Shut Up. An air of menace which still lingers 35 years on.

The final side also begins with a 1-2-3 flourish. Godley and Creme’s Under Your Thumb is nicely sinister while the droning Souvenir is lifted from OMD’s well-crafted Architecture And Morality. Destinations, intentions and opinions. After this comes One In Ten, UB40’s scathing commentary on unemployment. A statistical reminder of a world that doesn’t care. Things turn odd with Toyah’s overwrought Thunder In The Mountains, like Enid Blyton’s Adventure series set to music. I still see the parrot Kiki and dream of Bill Smugs.

Instinction Part 2 comes in the form of Mule (Chant No. 2) from Beggar and Co. Flute loop. Then The Nolans’ spacey Chemistry which is followed by the risible Qwaka Song. The Tweets as ducks. Most mysterious of all, the contrived yet compelling new wave sound of The Scoop and Panic. It all ends with This Ole House. And back to ABBA via Star Sound, also enjoying a second success. Now: Stars On 45 (2) / Voulez-Vous / S.O.S. / Bang-A-Boomerang / Money, Money, Money / Knowing Me, Knowing You / Fernando / The Winner Takes It All / Super Trouper / Stars On 45 (2). It’s the best I can do.

Chart Hits ’81: A sprawling mass of pop gems, synth wonders, odd one-offs, inexplicably popular novelty songs and the ubiquitous medleys. During that Christmas, it saw turntable action in thousands of homes across the UK and Ireland. There really was something for everybody. With that in mind, now is the time for it to finally get pop justice.

Favourite tracks
UB40 – One In Ten

Imagination – In And Out Of Love

Lest we forget
The Scoop – Panic

This entry was posted in Chart Hits. Bookmark the permalink.