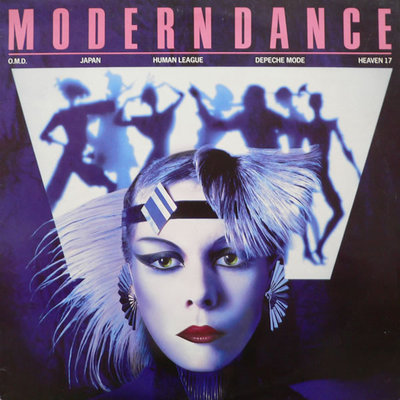 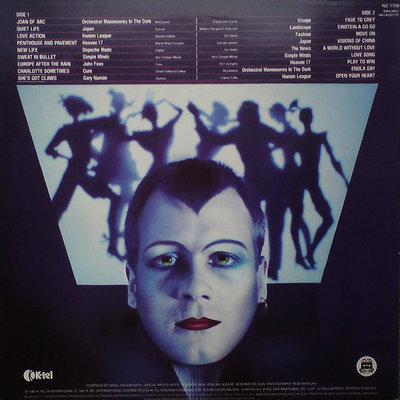 Review
Modern Dance was released by K-Tel during December 1981. Unlike any other compilation then or since, it totally nails the new romantic sound of that year, the scene that rose from the ashes of post-punk. It may have been a quick cash-in but its sheer influence stretched far and wide over the last 35 years. I was late to the party, not getting hold of a taped copy until going back to school for September 1982. BASF 60+6. Green inlay. Needless to say, I have loved it from day 1 – a real back to basics / comfort food of an album.

The Virgin label provided the bulk of the musical muscle. There are 13 artists included and five of them get two tracks apiece. Orchestral Manoeuvres In The Dark’s Joan Of Arc is the opening number, all towering, a monumental beauty to a 15th century heroine. Japan’s Quiet Life picks up the tempo, their key lift-off moment when they left glam rock behind. When ripping the vinyl during the summer, I had forgotten how hotly-mixed this one is. There’s hardly any space between the tracks – the K-Tels and Roncos are usually tight but Modern Dance is exceptional. Time for some Love Action; The Human League’s second pre-Dare single, its seminal parent album in many homes that Christmas.

An important outing: Heaven 17’s Penthouse And Pavement, their title track of their debut LP. Originally part of The Human League, two roads diverged in a yellow wood. A more disjointed sequence of sounds but plenty of funk and rhythm. Transition to another place, Depeche Mode’s pure distilled synth pop New Life. Operating, generating. And then, the gradual evolution of Simple Minds. Sons And Fascination’s second 45, the driving, almost continental shimmer of Sweat In Bullet. You can feel its swagger, the momentum growing.

Notable by their absence are Ultravox Mk.2. All Stood Still, The Voice, The Thin Wall. Each one excluded. Possibly Chrysalis-related (there’s no Spandau Ballet either). Instead there’s a replacement in the form of ex-lead man John Foxx whose decadent Europe After The Rain fits in nicely. This perfect sequencing continues with The Cure’s evocatively gloomy Charlotte Sometimes. Based on Penelope Farmer’s novel and a classic bridge between Faith and Pornography. Last on side 1, the downbeat mood is carried over onto Gary Numan’s jerky She’s Got Claws featuring the immaculate bass of Japan’s Mick Karn.

“We walk backwards
Saying nothing.”

England v France: Visage’s absolute classic masterpiece Fade To Grey features the same lyrics in two languages. The English lyrics are sung whereas the French lyrics are spoken by a female voice, Brigitte Arens, a student from Luxembourg who was Rusty Egan’s girlfriend at the time. The video was directed by Godley and Creme. In it, Steve Strange’s friend Julia Fodor mimes the Gallic speech. Him: moody with heavy make-up, it’s a stunning performance. When legends like this die, parts of your childhood die with them.﻿

From the tea rooms of Mars. . . Landscape’s pulsating Einstein A Go Go. Old soldiers by 1981, given their formation was 1974. The next one starts like an angular new wave tune. Fashion’s Move On. The Bowie influence is undoubted. When the synths kick in, a proper dance groove erupts. More Japan, the joyous Visions Of China with its stupendously great drum break. Taken from Tin Drum, 1981’s most ambitious album, released a month before Modern Dance. Their fifth and final LP and described as “mannered cubist pop” by Paul Grimstad. Four 45s: The Art Of Parties – Visions Of China – Ghosts – Cantonese Boy.

Obscure alternative – A World Without You by The News. A bouncy and sweet pop tune with a kicking bassline and keyboard hook. Unique; the most other-worldly song here. The remainder is all second outings. Simple Minds’ creative epic Love Song is followed by Heaven 17’s deliberately unfocused call-and-response Play To Win. Predating Threads by four years, OMD’s doomed Enola Gay, a second class prefab memory. To the end: 1981 is defined by the Human League. Open Your Heart is the grand finale, its opening heavy synth leading to a glorious three minutes of melody. Dreams are made of this etc.

“And if you can stand the test,
You know your worst is better than their best.”

Lest we forget
The News – A World Without Love