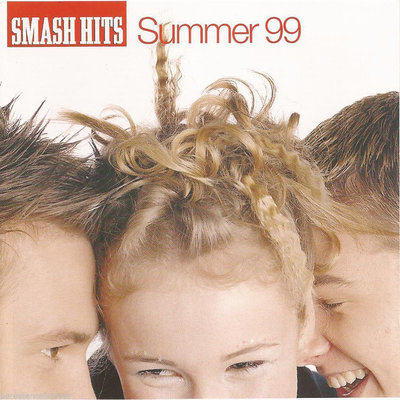 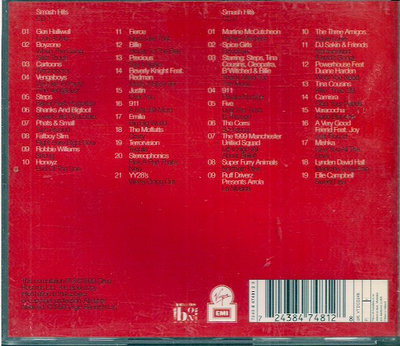 Review
Smash Hits Summer ’99 sees another change in design – four unknown heads across the front and back pages of the booklet with an advert for the magazine inside.
“We can’t wait to get hold of Smash Hits every fortnight!”
“The best pop magazine on the planet.”

Just 17 of its 40 tracks have already been written about. Look for these reviews:
Hits ’99: Five – Until The Time Is Through, The Corrs – So Young.
New Hits ’99: Steps – Better Best Forgotten, Shanks and Bigfoot – Sweet Like Chocolate.
Now That’s What I Call Music 42: Boyzone – When The Going Gets Tough, Cartoons – Witch Doctor, Vengaboys – We Like To Party, Robbie Williams – Strong, Honeyz – End Of The Line, Billie Piper – Honey To The Bee, Justin – Over You, 911 – A Little Bit More, Emilia – Big, Big World, Terrorvision – Tequila, Spice Girls – Goodbye, Steps, Tina Cousins, Cleopatra, B*Witched and Billie Piper – Thank ABBA For The Music, Tina Cousins – Killin’ Time ’99.

Geri’s back! Her debut solo single Look At Me is chosen to kick off disc 1. It’s a bouncy and catchy pop tune with some great production and a Shirley Bassey vibe. The music video features four versions of Halliwell: a vamp, a bitch, a virgin, and a sister. A #2 position was achieved; it fell 700 copies short of Boyzone’s You Needed Me. The latter was released on two CD singles whereas Look At Me just had one. Also stalling at #2 were Phats & Small whose Turn Around sampled Toney Lee’s Reach Up (Acapella) and Change’s The Glow of Love. And another silver: Fatboy Slim’s Right Here, Right Now. The basic string melody comes from the James Gang song Ashes, The Rain & I. while the lyrics are a sample of Angela Bassett’s voice saying “This is your life, right here, right now!” from Strange Days.

The second half of CD1 throws up Fierce’s half-decent R&B Dayz Like That, Precious’ Eurovision entry Say It Again (12th place) and Beverly Knight’s Made It Back ’99. The latter features Redman and samples Chic’s Good Times. Memories of boozy Ranelagh nights. The Moffatts came all the way from Canada but their formulaic country-meets-Rembrandts cuts no ice now. Far more palatable are Stereophonics and the driving Pick A Part That’s New, another top single from Performance And Cocktails. The music video features the band parodying The Italian Job and performing in a bus which is on a cliff edge. Pop gem time: The Younger Younger 28s and We’re Going Out – synth pop c.1982 sound which owes a huge debt to The Human League. They were fronted by Phil Oakey soundalike Joe Northern, with synth player Jimmy D and female singers Andie & Liz.

CD2 sees a move into less familiar territory beginning with the saccharine slop of Perfect Moment by Martine “Tiff from Eastenders” McCutcheon. The mood is not improved as 911 fail to do any justice to Stax classic Private Number while The 1999 Manchester United Squad’s Lift It High is epic sludge. Nine days after its release, they’d nick the Champions League from Bayern Munich. Be thankful for the endlessly inventive Super Furry Animals; Northern Lites is the calypso tinged first 45 from Guerrilla. The 7″ still gets a regular spin on my deck. Bang on with Ruff Driverz and Arrola on the breathless La Musica before the ugly side of big beat gets revealed with The Three Amigos’ perplexing take on Louie Louie. 1999 was a time for having it large. One example is the classical trance cheese of DJ Sakin and Friends’ No Mans Land (David’s Song) which retains a gurning attraction.

Fresh from his adventures with Armand Van Helden comes Duane Harden who gives Powerhouse’s What You Need a tasty vocal. Meanwhile the aptly-named Larry Lush joins with Tall Paul on Camisra’s intense Clap Your Hands. And then the hair-raising beats of Veracocha’s Carte Blanche. A 12″ from Tag Records. Ode to Joy: Just Round is built on Stevie Wonder’s Uptight and sounds like its beamed in from the kitchen. The last three tunes are amazing. A tale of the unexpected: some Bermuda reggae on Alan McGee’s Creation label – Mishka’s laidback and relaxed Give You All The Love. He’s Heather Nova’s brother. Next is Lynden David Hall’s soulful Medicine 4 The Pain. We close with Ellie Campbell’s gorgeous Sweet Lies, unjustly peaking at #43.

Mishka – Give You All The Love

Lest we forget
Younger Younger 28s – We’re Going Out

This entry was posted in Smash Hits. Bookmark the permalink.