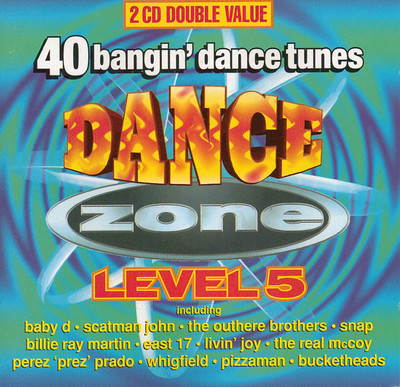 First up it’s Baby D welcoming Korgis to the jungle on I Need Your Loving (Everybody’s Gotta Learn Sometime). A true scorcher from June with an absolutely wonderful piano and vocal combination. Unlike others, I love the reggae rap. . . which brings to the staccato delivery of Scatman, in turn followed by the great wide open soundscapes of Boom Boom Boom. Out there. Kicking you in the face with nostalgia – Billie Ray Martin’s tortured Your Loving Arms. Staying for more are East 17 and the laidback Hold My Body Tight while Livin’ Joy make the dancefloors implode to the sounds of Janice Robinson’s vocal on the fantastic Dreamer. Next, the Real McCoy’s introspective Love And Devotion which ushers in a 1-2 punch from 1990 heavyweights Black Box and Snap. The former’s Not Anyone is a middling attempt at recapturing dreamy glories while The First The Last Eternity is like a pre-club tune for practising dance moves in front of a mirror. Getting into the Eurovision groove, Deuce’s pop mover I Need You. It made the pre-selection round that April.

After the forever sound of Bobby Brown’s familiar Two Can Play That Game and Grace’s overwhelming Not Over Yet, the Mad Stuntman (plus Reel 2 Real) drops by with the relentless Raise Your Hands. Next comes the deep disco sound of Judy Cheeks’ Respect coupled with M People’s divine Open Your Heart. A song for Europe: Love City Groove’s self-titled and underrated beat groover was the UK entry in 1995. The final line up of the band consisted of Stephen Rudden, Jay Williams, Yinka Charles (AKA ‘Reason’) and Paul Hardy. This ushers in a smoother and more laidback sequence with Ladysmith Black Mambazo and China Black’s Swing Low, Sweet Chariot and Freak Power’s Turn On. And then, a second turn for East 17 and the apocalyptic Let It Rain. Kudos for the inclusion of Mark Oh’s continental smash Tears Don’t Lie, a raved-up take on When A Child Is Born. CD1 concludes with Perez Prado’s uptempo mambo version of the Neapolitan song Guaglione that Guinness used to promote in an advertisement known as Anticipation.

CD2 gets underway to the sound of Whigfield’s erotic Think Of You – “I need you inside me tonight.” In the same zone, Pizzaman’s raunchy Sex On The Streets which is followed by the Happy Clappers’ uplifting club anthem I Believe. Praise you like I should. A.S.H.A can be filed under Italian project: Paolo Galeazzi, Maurizio Parafioriti, Dario Pozzi & Lello Gentile. J.J. Tribute is dedicated to Janis Joplin and originally came out in 1990. Remixes emerged in late 1994 and this Euro Club Edit is amazing and totally enhances the deadly original’s glorious hedonism. Later versions re-sung by Olivia. Still in the house, Direct Me from The Reese Project slipping into Ronni Simon’s soulfully rare Take You There. Up to Yorkshire for Shiva’s debut 45, the pounding Work It Out before Spirits go all garage on Spirit Inside. Over to Kenny Dope for the relentless Bomb, a welcome parachute before he Gems For Jem’s relentless house mover Lifting Me Higher.

Eurodance’s Move Your Body is a perfect example of the name suggesting the meaning. One Tribe? An alias used by Rollo & Rob Dougan to release the happy ‘n’ sandblasted High As A Kite. The former pops up again (as Rollo Goes Mystic) on the spinetingling Love, Love, Love – Here I Come. Keeping it real, the definitive mix of Tin Tin Out’s Always Something There To Remind Me – the Tooley St. Edit. +The pummeling beats of Westbam join forces with Red Jerry on the grinding Wizards Of The Sonic, another rare 7″ edit. Nice beat matches with Koolworld Productions’ In-vader (Tall Paul’s Lush Mix Edit). David Wood: “48 year old male dancing round my kitchen with headphones on dreaming of days gone by﻿.” Samples include Darth Vader from Return Of The Jedi & Al Pacino when he’s stuck in the bathroom in Carlito’s Way. We tread water on Tinman’s Gudvibes before going out of our heads to Hasha’s Everybody In The World. Last men standing: DJ Misjah & DJ Tim and the brutal techno assault of Access. Memories of a dancefloor monster.

Favourite tracks
Deuce – I Need You

This entry was posted in Dance Zone. Bookmark the permalink.