Posted on December 8, 2018 by nlgbbbblth 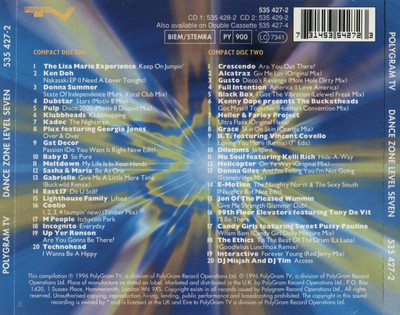 CD1 starts with one of the big tunes of the year, Keep On Jumpin’. The 1978 original was recorded by Musique, who were subsequently namechecked for a Daft Punk B-side. This Bizarre Inc Remix edit is like a hybrid of techno and disco with great vocals. In April 1997, Harmless released Jumpin’ (Original Full Length Classics From The Disco Underground). I bought it in Abbey Discs and it contained two record 2s and no record 3. Bad buzz. Equally euphoric is the second track, Ken Doh’s stupendously great I Need A Lover from the Nakasaki EP while Donna Summer gets back into all our flight cases with State Of Independence (Murk Vocal Club Mix). The jury’s out on Motiv 8’s remodeling of Stars, Dubstar’s heady intergalactic stomper. But I love it, tremendously evocative of the era. Motiv 8 also remix the next one, Pulp’s futuristic Disco 2000. “Do you recall…”

Go aerobic with the Klubbheads’ intensely twirling Klubbhopping and get on board the Nightrain as driven by Kadoc. Then slip into the garage for Plux’s Over & Over; vocals by Georgia Jones before more disco juice: Gat Decor’s inventive Passion. There’s a jungle flavour on Baby D’s So Pure while Meltdown’s My Life In Your Hands sounds immense due to Hazel Watson’s lungs. Trance time: Sasha & Maria’s Be As One, nice tune – rewind, please. Getting mellow is Gabrielle, Give Me A Little More Time plus East 17’s rather laboured Do U Still and the Lighthouse Family’s smooth cruiser Lifted. Inexplicably bad – Coolio’s crap countdown 1,2,3,4 but there’s redemption on M People’s retro Itchycoo Park – “So life is just a bowl of All-Bran – very true!” Bringing the first half to a neat close are Incognito and the jazzy goodness of Everyday, Up Yer Ronson’s pounding Are You Gonna Be There and Technohead’s madcap I Wanna Be A Hippy. As Joris Buris once said: “Still the most Dutch video clip in existence: – bikes – weed – gabber – Amsterdam.”

“If we look across an ocean….” At the time of release, Crescendo’s Are You Out There? was a cinematic epic that wasn’t quite like anything else. Epic in nature and in duration – it’s nearly 20 minutes long. The 7″ edit is here, remixed by Crispin. Next some twisted peppery tech-disco from Alcatraz (Give Me Luv) and Gusto (Disco’s Revenge). A wider soundscape: Full Intention’s ode to the US, I Love America while Black Box hang on to their egos with I Got The Vibration. Dope on plastic! Kenny and The Bucketheads’ Got Myself Together gives way to the glorious grooves of Ultra Flava by Heller & Farley. +8 Grace’s Skin On Skin, the Orange Mix is the brother of U2’s Lemon, basically a reworked instrumental of that track. Elsewhere, check out BT’s Loving You More with the so-earnest Vincent Covello while Dilemma’s In Spirit packs an emotional Balearic punch.

Pianos are clearly to the fore on No Soul’s Find A Way. Kelli Rich supplying the voice. Another destination, Helicopter’s On Ya Way, a favourite from Sides. Equally compelling – Donna Giles’ ecstatic And I’m Telling You I’m Not Going. Back in the days when putting “E-” in front of something didn’t relate to the internet: E-Motion’s catchy The Naughty North And The Sexy South. Meanwhile Jon Pleased Wimmin was still moving the crowd – Give Me Strength is particularly slamming. Racking up the BPMs are the 99th Floor Elevators – once again featuring Tony De Vit – on the luved-up rush of I’ll Be There. Relentless! Candy Girls and Wham Bam. No thank you Ma’am. In the Philippines, according to one of the survivors of Ozone Disco fire in 1996, The Ethics’ La Luna was the DJ’s song while the disco was burning. The tragedy claimed almost 200 lives and remains unresolved. Forever Young was by Interactive and remixed by Red Jerry. Last orders and a throwback to Dance Zone Level 5: Misjah & Tim’s Access, now in radio edit form.

Lest we forget
Sasha & Maria – Be As One

This entry was posted in Dance Zone. Bookmark the permalink.