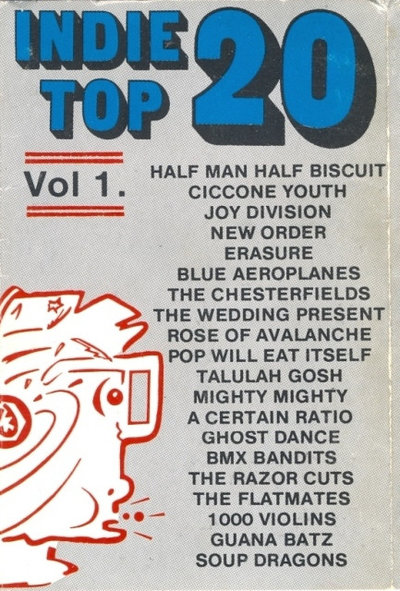 Review
Let’s go right back to 1981. C81 was a cassette compiled for the NME and released with Rough Trade. The main intention was to mark the first five years of the independent label movement. It was the debut in a series of many cassette releases from the music paper and was compiled by Roy Carr and Christopher Rose. To obtain your copy, you had to collect two coupons from the magazine and send off £1.50. The first printed coupons and advertisement for the cassette were in the issue dated 31 January 1981. For Irish people that meant a trudge to the post office or bank to purchase a postal order or draft in Great Britain pounds and waiting at least 28 days for delivery. The tape contained 25 tracks ranging from electronic beats, post-punk to jazz via poetry and ska. You also got the ‘C81 Owner’s Manual’, a 32-page booklet of lyrics and artwork that was assembled by cutting up and folding a page from the magazine. This consisted of 16 small double sided panels, and was designed to be slipped into the tape box. Sales via this channel >25,000.

C81 went on general release in May 1981, a month in which both Bobby Sands and Bob Marley died. At this point, Chrysalis Records refused to re-licence the tracks by The Specials (Raquel) and Linx (Don’t Get In My Way), so these were replaced by Panther Burns (Bourgeois Blues) and Television Personalities (Magnificent Dreams). And now, a brief golf digression: the Irish Mixed Foursomes is a national competition, a knockout matchplay tournament from the outset, with clubs facing regional opponents in the first number of rounds. The provincial semi finals and final are played at a neutral venue in August each year, with the winners going forward to the national semi finals. In 1981 New Ross Golf Club won the All Ireland Mixed Foursomes and my mother was on the team.

By 1986, I was playing a lot of golf myself. Primarily at holiday time – I’d mix fruit picking in the morning with 18 holes in the afternoon. I’d started to play in junior tournaments the previous year and my form was steadily improving. That summer, the big one was the Junior Matchplay. The week starting 11 August was crucial. On Tuesday 12th I played the highly-fancied Andrew Ronan in the semi-final. He was four holes up with six to play. Then I hit a streak and won the next five to go one up as we strolled to the 18th tee. We halved the last and he stormed off, very unhappy. Two days later, I won the regular singles tournament with a 63 nett. Things were looking up for the Junior Matchplay final which was being held at 7.00am on 15 August. My opponent was Paul Murphy, a guy about three years’ older and a solid operator. He won 3 and 1. The dream was over; after that point, my interest gradually waned over the years. That night, I headed off to Rome on my school tour. My walkman played an NME tape as we boarded the ferry at Rosslare – C86.

A lot has been written about C86. Its legacy endures with Cherry Red reissuing the album as an expanded 3CD set in 2014. Andrew Collins said “It was the most indie thing to have ever existed.” while Bob Stanley quipped that C86 represented “the beginning of indie music… It’s hard to remember how underground guitar music and fanzines were in the mid-’80s; DIY ethics and any residual punk attitudes were in isolated pockets around the country and the C86 comp & gigs brought them together in an explosion of new groups.” It was primarily a cassette release although vinyl copies were also pressed up in limited quantities. In the spring of 1987, the very first Indie Top 20 album emerged – on cassette only – but in two different sleeves, the second with prominent Melody Maker logos.

“Hello, you’re on the air” goes the sample as A Certain Ratio get this party started. Mickey Way (The Candy Bar) is a really unrepresentative beginning. It’s full of elongated riffs and basslines and doesn’t really go anywhere. Of far more interest is track 2, ace favourite of school yard and the Dave Fanning show – Half Man Half Biscuit’s surreal slo-mo synth ‘n’ organ masterpiece Dickie Davies Eyes. Alarmed, the unemployed. And as time goes by so fast, “All the people who you’d romantically like to still believe are alive . . . are dead.” makes me depressed beyond tablets. Next, blink and you’ll miss it – The Soup Dragons’ breakneck jangle fuzz Hang Ten! Over to Dee Raz for words on the video “This comes from the 10 October 1986 edition of The Chart Show’s indie chart, where the Soup Dragons were at #8. After that they played the number 1 song Dickie Davies Eyes from Half Man Half Biscuit. Then they played an indie exclusive from Goodbye Mr Mackenzie called The Rattler, which featured an unknown Shirley Manson, playing the keyboards, who later on became the singer of Garbage !!!!” Just don’t confuse them with The Snapdragons.

One of the perverse joys of watching the weekly indie chart countdown was seeing the heavy hitters do really well. That means Depeche Mode, Erasure and later on, the PWL stable of Kylie Minogue and Jason Donovan. Sometimes, Vince & Andy’s breakthrough, is track 4. In its wake, the less fondly remembered One Thousand Violins – Please Don’t Sandblast My House, a tune with a catchy psychedelic feel. You’ll find it on Cherry Red’s C87. Moving on, there’s a psychobilly invader in the form of Guana Batz’s obnoxiously tuneless Loan Shack. That really was a genre that I generally avoided when rummaging through Freebird’s basement. The trashy feel continues with the early incarnation of Pop Will Eat Itself, a buzzing noise known as Oh Grebo I Think I Love You. Not a bad effort and an funny comment on the scene itself, but they’d get so much better.

“After school, a friendship walking home
We fled across the fields, until we were alone
To a bridge, that stood close by the sea
The day that we spent there, is ours eternally”

Discogs states that the Band Of Joy label was affiliated with Strange Fruit Records, who released umpteen BBC session recordings from the 1960s onwards. The truly excellent Indie Top 20 blog confirms that Clive Selwood owned the latter. Selwood was father of the compilers Chet and Bee. That explains three of next four tracks. First is The Wedding Present’s You Should Always Keep In Touch With Your Friends, a double A-Side – their third single – with This Boy Can Wait. The Peel Session take dating from 11 February 1986 was way better and is included here and preserved on the tinny Tommy. Joy Division’s Transmission: out of time but was the leading track on their recently-released Peel Session 12″. Naturally New Order are next (you’ll need to turn the tape over) with a marvelous cover of Turn The Heater On, a Keith Hudson tune and Ian Curtis favourite. A shivery exercise in ghostly synthesised dub and a welcome antidote to the blandness of Movement. Penny Anderson would not approve of this story: I bought the 12″ Peel Sessions with it on a trip to the Young Scientist Exhibition in Dublin’s RDS. A few of us left the exhibition as soon as possible, gave the teachers the slip, and got a bus into Dublin’s city centre where a brand new Virgin Megastore had recently opened. In those days Virgin had vinyl sections for everywhere (Happy Flowers, Butthole Surfers, Wire etc) so I was in heaven.

The Blue Aeroplanes would briefly swagger in baggier times with . . . And Stones but early effort Lover & Confidante is unremarkable. This was the John Stapleton era, a man whose compilations and mixes are amazing. Check out 2009’s Full Circle for Very Good Plus. We move into a goth phase with both Ghost Dance and Rose Of Avalanche. The former’s Grip Of Love is just ok while Velveteen plods along like a broody rock epic. Which came first, Sweet Child O’ Mine or it? The quality improves with Sonic Youth’s alter-ego Ciccone Youth and Into The Groovy, deconstructed Madonna which they’d fully explore on 1988’s Whitey Album. With the benefit of 30 years’ hindsight, were they being ironic and was this a piss-take? A quick glance at any indie message board will throw up plenty of pop-hating Sonic Youth fans. And then back to bland with the unexciting quirks of The Chesterfields.

The last quarter of this rather uneven Volume 1 starts with The Razorcuts’ thoughtful and melodic jangler Sorry To Embarrass You which fell through the cracks until its inclusion on Rough Trade’s Indiepop 1 double CD in 2004. On the same label – Subway – came The Flatmates and the fizzed-up I Could Be In Heaven. They’d also improve as would Talulah Gosh, whose debut 45 Beatnik Boy lands next. While Amelia Fletcher’s vocal is clear and strong, the track has a rather limp atmospheric. I saw Heavenly play in Barnstormers, Dublin sometime during August 1991 and it was electric, a drunken hour. In the same vein are Mighty Mighty whose Throwaway is exactly like the title suggests. Sadly, any hopes of an killer closing song are dashed as soon as the twee tones of the BMX Bandits at their worst. The Day Before Tomorrow is appalling stuff, a shambling charmless amateur dirge.

A most welcome postscript: my son’s joint project entitled “How efficient is algae as a fuel compared to other fuels?” is chosen for the 2019 BT Young Scientist & Technology Exhibition. Chemical, Physical & Mathematical Sciences category. The RDS is still the location for the event. The results are announced on 11 January: Junior Group – 1st place. No slipping off for me this time – I am extremely proud of him, a wonderful achievement.

Razorcuts – Sorry To Embarrass You

Lest we forget
New Order – Turn The Heater On