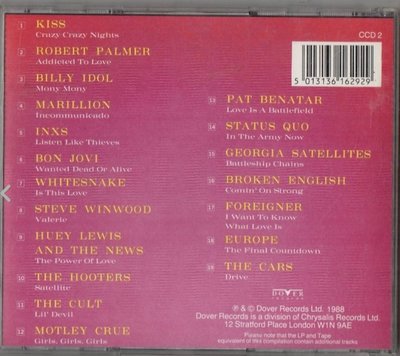 Review
The second Chart Show spin-off saw the focus move to rock with a double LP and CD tie-in being released in time for the mid-term break of 1988. The vinyl had 24 tracks while the CD contained 19. So early adopters of perfect sound forever missed out on Icehouse – Crazy, John Parr – St Elmo’s Fire, The Rainmakers – Let My People Go Go, Paul Carrack – Don’t Shed A Tear, Jethro Tull – Said She Was A Dancer i.e. most of the vinyl’s side 4.

In September 1986 our school started up a music library. For a nominal membership fee, pupils could rent out albums for home listening and copying. There was a stock of about 150 titles – equally divided between LP and cassette. It would open two lunchtimes a week – I usually tried to work in it at least one of those days. Hard rock and soft metal were both extremely popular; possibly due to the number of boarder pupils in the school. Boarders typically came from well-off families who were predominately farmers. Their music tastes weren’t completely uniform but a significant percentage were big fans of AC/DC, Europe, Whitesnake, Bon Jovi, Def Leppard etc. Accordingly Slippery When Wet was massive all through the winter of 1986 and well into the spring of 1987. I hated it at first but gradually the lunchtime plays saw its songs worm their way into my skull and the two later singles, Wanted Dead Or Alive and Never Say Goodbye gradually became sickly favourites.

Rock The Nation blasts off with a rocket – Crazy, Crazy Nights by Kiss. It was produced by Ron Nevison and features a radio-friendly almost poppy sound with decent harmonies and swirling guitars. There’s no let up with track 2, Robert Palmer’s signature song, Addicted To Love, which was supported by one of the most iconic music videos of the decade. “You wanna dance, yeah?” intones Billy Idol on his raucous cover of Mony, Mony. A live version was used to promote the US reissue of Vital Idol. Its call ‘n’ response garage style was an instant hit in the clubs, with the stonewashed jeans’ brigade cutting some serious moves to it in the Crosbie Motor Hotel. Their dancefloor was dazzling as their white socks and black slip-ons set off the shiny wooden tiles. It was the era of free admission before 11.00pm and suppers were served a requirement when a bar extension was permitted. Usually chicken curry and rice or steak and kidney pie in a foil tray + two scoops of mash.

That Friday night disco during late 1987 and early 1988 was the place to hear INXS. New Sensation, The Devil Inside, Mystify, Mediate, Never Tear Us Apart, Need You Tonight. “You’re one of my kind” was like a secret code to us who dug the cool sounds of Kick. Here, the compilers drop a curveball by choosing the band’s 1986 single Listen Like Thieves. An inspired choice, the band rock out with a real swagger. Just before it, Marillion’s Fish era comes to a end on the driving Incommunicado. Now to Wanted Dead Or Alive, a song about Jon Bon Jovi’s admiration for Old West heroes, and how he identifies with them as being hated and loved at the same time. The lifestyle of every rock band was similar to that of outlaws in that each was “a young band of thieves, riding into town, stealing the money, the girls and the booze before the sun came up.” It’s pump your fist in the air time for the next three tracks – Whitesnake’s intensely deep & paranoid Is This Love?, Steve Winwood’s euphoric Valerie and Huey Lewis’ time travelling jam, The Power Of Love.

Amen…Send Money was the name of the Miami Vice episode – broadcast on RTE1 during November 1987 – that had The Hooters’ Satellite, a satire of the excesses of televangelism. The accompanying video depicted a young girl and her parents attempting to watch The Three Stooges interspersed with The Hooters performing, but being constantly interrupted by transmissions from a Christian show. A fist-pumping rock classic. Next come The Cult – re-invented as rockers on the Electric LP – with Lil’ Devil, purchased on the day I cycled 15 miles to Waterford to see Platoon in the cinema. And ideally paired with Motley Crue’s basic but effective Girls, Girls, Girls. Jay Sean remembers this era with unerring accuracy “Cigarettes, neon bar lights, leather clothing, waist high underwear…what a time.”

Pat Benatar’s dramatic Love Is A Battlefield may have been a 1983 / 1985 hit but it was still aired frequently in ’88, especially on RTE’s MT USA (ran until the year before) which really helped to prolong its life. Elsewhere Status Quo’s In The Army Now still rocks out in – especially in this company – sequenced before the Georgia Satellites louder than hell Battleship Chains. Another somewhat forgotten gem from this period is Broken English’s Comin’ On Strong, a enjoyable Rolling Stones rip-off. No disco is complete without a slow set and we’re not disappointed here as Foreigner’s provocative I Want To Know What Love Is kicks in. Ah the memories. We then wrap up with The Final Countdown, a typical end-of-night tune and The Cars’ Drive. “If you drink, don’t drive… but if you do, two will do.”

Lest we forget
The Hooters – Satellite

This entry was posted in Chart Show. Bookmark the permalink.