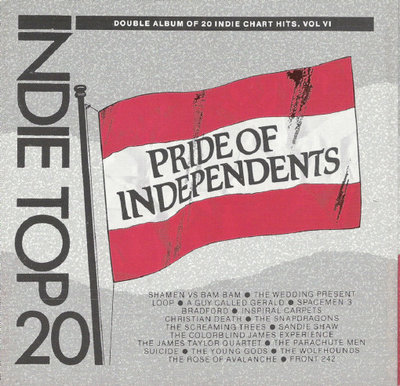 Review
During January 1989 I started a list of which albums were getting the most airtime on my stereo. Happy Mondays – Bummed, My Bloody Valentine – Isn’t Anything, New Order – Technique, Sonic Youth – Daydream Nation, Dinosaur Jr – Bug, Dead Can Dance – The Serpent’s Egg, The Fall – I Am Kurious Oranj, Something Happens! – Been There, Seen That, Done That were all in demand that spring. Meanwhile over at Beechwood Music, they were looking forward: “The new decade approaches, and the international new music scene has never been more exciting and mind-expanding that right now!” The sixth instalment in the Indie Top 20 series would see CD buyers losing out; Rapeman’s deeply disturbing Budd was omitted due to lack of space. Down to the wire (Dwyer).

Once again there’s some brief notes:
Le Cadeau De Mariage/ The Wedding Present – Pourquoi Es Tu Devenue Si Raisonable?: “The ferret goes from strength to strength.”
The Snapdragons – The Things You Want: “Against abuse to women, anti-anti-feminism. James’ pouting/ plaintive vocals seduce your ears with tastefully thrashed and plucked guitar and an imaginative and grooving rhythm.” (David Gedge)
The Rose Of Avalanche – The World Is Ours: “If you like Bros – you’ll love these lads!”
The Wolfhounds – Rent Act: “There are thousands of homeless people in this country, particularly in and around the Capital. This government persistently passes laws to keep it that way.”
Inspiral Carpets – Butterfly: “A Peel favourite, their latest single, taken from the Trainsurfing EP, available on Cow Records.”
Suicide – Rain Of Rain: “Back after what seems like an eternity but is actually only ten years. Suicide prove that absence makes the heart grow fonder, whilst at the same time showing numerous young pretenders how to do it!”
Loop – Black Sun: “From the LP Fade Out, Loop take the blow torch and petrol cans to music and deliver their most powerful single yet.”

Christian Death – This Is Not Blasphemy: “This track is taken from the single What’s The Verdict/ Blasphemy which does not appear on any album.”
“If you get the feeling you’re living in the last days and are drawn by the charms of darkness and the macabre, perhaps it’s time for Christian Death.”
The Young Gods – Pas Mal: “European Sonic Architects are building songs of love and desire with instant fusion of heavy guitars and chrome. Future? – Present!” (Chris Levevski)
Spacemen 3 – Revolution: “Sweetly, simply put, Spacemen 3 are the only English band that I’d walk the sea to piss on.” (Byron Coley)

The Shamen vs Bam Bam – Transcendental: “…one of those intriguing fusions of differing musical styles that resulted in a classic dance track. Bam Bam; one of the first major innovators of the Chicago House scene, and The Shamen; a burgeoning UK indie band, collaborated on one of Desire Records’ first and most successful recordings. You may never hear the like again!”
Front 242 – Headhunter: “Front 242 are now. They’re Euro and they’re in your face! It’s time to make up your mind. You’re either for them or trampled under foot. The Studos Brosos melo makos.”
A Guy Called Gerald – Voodoo Ray: “One of the hottest tracks in the New York clubs – mixes by Derrick May & Frankie Knuckles; emerging from America. Gerald’s influences range from Sun Ra to Edward Barton. Rham’s most successful record to date. Gerald is from Manchester. Keep it abstract.” (Gerald)
Screaming Trees – Tangiers: “This incredible dance dream that takes you somewhere nice to do it – so do it!”
The James Taylor Quartet – Blow Up: “Inspired by the organ jazz of Jimmy Smith, former Prisoner James Taylor experimented at revitalising a series of old sixties TV and film theme tunes. Blow Up was the first – raw, aggressive and sparkling, it captured Peel’s attention. Sessions followed, as well as an appearance in his Festive 50.”

Bradford – Dodging Around In Cars: “…lazy bastard fumbles funk concerning itself with one afternoon of a misspent youth.”
Sandie Show – Nothing Less Than Brilliant: “The new Sandie Shaw single; succulent, tantilising, rich, beguiling, a bargain at the price and very highly accomplished. A sweeping loop of a record which lies somewhere in between The Cocteau Twins, The Smiths and Raymonde but sounds refreshingly GORGEOUS for all that. Mature pop, vintage wine, send me a kiss and I’ll make you my own. Single of the Season.” (Everett True)
The Parachute Men – Sometimes In Vain: “Flying jackets and bootlace ties. Sunglasses, sideburns, buttondown shirts. Stripes, shades, scarves, loud guitars. A floatdown, a freefall. From Leeds, The Parachute Men brandish an intuitive talent for non-nonsense passionate guitar rock underwired with acoustic country threads.”
The Colorblind James Experience – Considering A Move To Memphis: “The Colorblind James Experience is a six member rock and roll band whose diverse instrumentation allow the group to sound like anything from a traditional country band to a demented small town orchestra.”

The Wedding Present embarked on their maiden Irish tour in 1988. The Blue Note Music Club in Limerick is noted as the first night – 26 October followed by Cork’s Sir Henry’s – although something nags me that it may have been in De Lacy House? Anyway they turned up in Dublin’s McGonagles on Friday 28 October. Tickets were £5 and they played Why Are You Being So Reasonable Now? / This Boy Can Wait / Kennedy / Everyone Thinks He Looks Daft / I’m Not Always So Stupid / No / Anyone Can Make A Mistake / My Favourite Dress / Be Honest / Nobody’s Twisting Your Arm / Take Me. Back then the band still did encores. We got Hopak / You Should Always Keep In Touch With Your Friends / Happy Birthday. And then one more – A Million Miles. The tour poster was the Why Are You Being So Reasonable Now? sleeve which was their current single and final release for Reception. David Gedge looks like Robbie Williams in the video and balloons are replaced by confetti. It’s good but not great and the CD single also included a French version which was also released as a standalone 7″ in a blue shade sleeve credited to Cadeau De Mariage.

You’ll note that Hopak was played in that first encore. Some people in the audience were surprised but the track had originally appeared on their second Peel session of October 1986. That old Ukrainian folk tune was a favourite of guitarist Pete Solowka and was thrown into the radio session after the usual four tracks had been recorded. The reaction was positive and 1988 saw two more sessions wholly devoted to Ukrainian tunes. All nine tracks featured were eventually released as Ukrainski Vistupi V Johna Peela in 1989. It was supposed to come out on Reception but the distributor, Red Rhino, collapsed just before the release date. Copies of the Reception version were bought up by RCA and released by BMG the following April with a barcode/catalog number sticker applied to the back sleeve. However many copies of the 10″ were missing the CD-sized booklet therein.

Not to be confused with The Soup Dragons, The Snapdragons’ jaunty tune The Things You Want continues this rather folky theme. It’s over in a flash and was reborn on Cherry Red’s C88 in 2017. The Rose Of Avalanche drop The Things You Want, a sure sign of gradual improvement. And then the meaty Rent Act from The Wolfhounds, a condemning soaring protest song that really gets under your skin. Buand upwards, my first sighting of the Inspiral Carpets. Butterfly is the lead song from their second EP, Trainsurfing. By the time it was released, original singer Stephen Holt was gone, to be replaced by Tom Hingley who Hector met in a Manchester wine bar towards the end of the year. A swirling morass of 60s influences plus a deadly organ and guitar line. The 12″ was a tough pull, eventually found in Comet, December ’89. Meanwhile REM had covered Suicide’s Ghost Rider on the B-side of Orange Crush; the band were back on the controlled synth chaos Rain Of Ruin. Next we get Croydon’s finest – Loop with the thrilling epic psychedelic drone that is Black Sun.

From despair to where: Christian Death’s This Is Not Blasphemy is the sound of a band trying too hard – the type of people who would deliberately vandalise a church or shout abuse at elderly massgoers. On Play It Again Sam are the Young Gods whose Pal Mal is short, sharp but ultimately ordinary with very little to recommend it. Thankfully this rather ugly sequence (on vinyl four tracks ending with Rapeman) is saved by Spacemen 3 and the explosive Revolution. Like a cross between The Stooges, Hawkwind and The MC5, LSDays remembers “I think that guitar sounds are a combination of space rock and shoegaze, you know fuzz and overdrive around the room﻿.” It was the hardest sound on parent LP, Playing For Fire, an album that was a more than worthy follow-up to The Perfect Prescription. In Waterford RTC, I got a copy of same from a JAMC fan in black leather. Possibly named Larry who was studying Industrial Computing and handed over the tape in the restaurant; looking back 30 years later it’s a hazy smoked-filled memory.

“Transubstantiation, perceptual activation”
In Gorbachev We Trust, one of my most-played records of that spring had Transcendental tucked away on the second side. A remix courtesy of Bam Bam was released at the end of 1988 and deeply enhanced the danceability of the song. The perfect collision between indie and dance. Next we’re back in the industrial zone with the austere but oddly melodic Headhunter by Front 242 – taken from Front By Front, a late ’89 purchase from Comet Records. +8 Voodoo Ray from Gerald Simpson recording as A Guy Called Gerald. Viva Manchester, stay jive, Derek and Clive. A beautiful vocal from Nicola Collier and DJ Pigg’s recall: “I love the fact that Gerald wanted the voice to say ‘Voodoo Rage’ but the sampler didn’t have enough memory!” Following in its wake are the Screaming Trees with the one of the most obscure records in the entire series, the wonderful Tangiers. Like a parallel universe New Order, they hailed from Doncaster and seem to have vanished without trace. “In a world without you, please don’t leave me.”

Organ fans rejoice! The James Taylor Quartet’s cover is the sound of the future. As filtered through a swinging ’60s filter. Ex-Prisoner comes good, making those hot summer days sound funky. Making wah-wah waves – surprisingly – were Morrissey favourites Bradford on Dodging Around In Cars, a 12″ B-side. Another mate of Steven Patrick, Sandie Shaw pops up next on the winsome joy of Nothing Less Than Brilliant. Chrissie Hynde on ace harmonica, never was a song more accurately described. In a similar style, the next song The Parachute Men’s Sometimes In Vain gives off a ’60s vibe with a rather harmony-drenched second half plus some nifty organ action. Lastly – and somewhat of an anti-climax – we get the rather silly and throwaway Considering A Move To Memphis, a tune by , The Colourblind James Experience. “Ooh look…”

Sandie Shaw – Nothing Less Than Brilliant

Lest we forget
Screaming Trees – Tangiers