Manchester, So Much To Answer For (Strange Fruit, 1990)

Posted on September 7, 2019 by nlgbbbblth 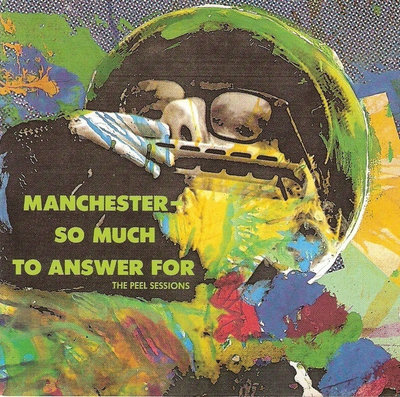 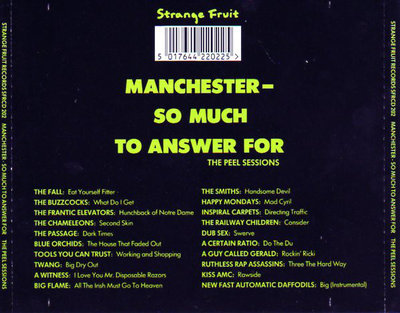 Review
“The Dutch East India Company and the U.S.A. of A
Think they can fool with their sincere use of your ear”

Cover art: Central Station Design
Digital remastering: Don Walker
Words: Penny Anderson
“And now the third wave, the third summer, the most hyped, pervasive & commercially successful; Manchester isn’t the ‘rainy city’ anymore, it’s ‘Madchester’, starring the Happy Mondays and the Inspiral Carpets, and when strangers phone to speak about music and Manchester, I’m now asked if I wear flares, rather than if I have webbed feet, or if I’m depressed and wearing a raincoat. Another band, another cliche.”
Manchester, So Much To Answer For contains 20 tracks, all recorded in session for John Peel going back 13 years. The title is lifted from the lyrics of Suffer Little Children, The Smiths at their most poignant. First released on their elephant ear debut of February 1984, the song was subsequently reissued in May as the B-side to their top 10 smash Heaven Knows I’m Miserable Now. The Manchester Evening News went on to report that the relatives of the Moors murder victims had taken exception to the lyrics, in which three of the victims are mentioned by name. And in a stylish coup de grâce, the single’s sleeve photo of Viv Nicholson looked very like murderer Myra Hindley. Spend, Spend, Spend.

The Fall’s sixth session for John Peel dates from 21 March 1983 and is a hypnotic trawl through four blindingly great tracks that would subsequently appear on December’s Perverted By Language. Eat Yourself Fitter is amazing, seven minutes of what Ned Raggett describes as “an endlessly cycling rockabilly chug with extra keyboard oddities and sudden music-less exchanges for the chorus” Such was the intensity that Peel fainted. We then go back to September 1977 for the Buzzcocks’ speedy melodica What Do I Get while The Frantic Elevators’ Hunchback Of Notre Dame is 100 seconds of ragged rumbling. Sad old reds. Much more satisfying is Second Skin (Films), a dark, gloomy and glorious epic from The Chameleons. “My whole life flashed before my eyes” and “I dedicate this melody to you” being particularly potent passages. And as if by magic, intertwined in this sequence is the circular Dark Times, credited to Cherry Red stalwarts The Passage. And so it goes.

Ex-Fall members Una Baines and Martin Bramah had moved into The Blue Orchids by December 1980. The House That Faded It is a sprightly post-punk tune with some ace keyboards. Next are Hulme’s Tools You Can Trust with the dour bassline brag of Working And Shopping while Twang’s Big Day Out flashes by in two quick minutes – much like an unfocused That Petrol Emotion demo. Much improved are A Witness and their endearing I Love You Mr Disposable Razors; sample line is “Your watch carved from an Italian mountain”, a reference to a then popular advert for Mont Blanc wristwatches. We stay shambling for Big Flame’s experimental stop-start punk All The Irish Must Go To Heaven.

The second half of the CD brings us into more familiar territory. The Smiths’s Handsome Devil dates from May 1983 and was immortalised on legendary compilation Hatful Of Hollow, still my favourite ever release from the band. “Who will swallow who?” Fast forward to February 1989 and just before their Dublin concert for the Happy Mondays and the super edgy funk of Mad Cyril. Meanwhile Directing Traffic saw the Inspiral Carpets occupy #49 in the Festive 50 of 1989; they’d also take #50 with the session version of She Comes In The Fall. William Main on the former: “My favorite by far. Great track, great time and a great vibe… Ah to be 18 again.” And getting by as best they can, the Railway Children’s delightful Consider blending into Dub Sex’s angry but controlled Swerve.

To the sound of now. As encompassed on the 1979 funk groove of A Certain Ratio and Do The Du. Tony Wilson said “They were like Joy Division…but with better clothes.” Then a nice update to 1988 and A Guy Called Gerald’s bleeptastic Rockin’ Ricki. Staying current, the Ruthless Rap Assassins drop Three The Hard Way while Kiss AWC’s mad delivery of Rawside grows on repeated listens. Taking a walk to the end of the disc are the New Fast Automatic Daffodils and an instrumental version of their signature tune, the motorik Big.
“Vor uns liegt ein weites Tal
Die Sonne scheint mit Glitzerstrahl”

A Certain Ratio – Do The Du

Lest we forget
A Witness – I Love You Mr Disposable Razors

This entry was posted in BBC Sessions. Bookmark the permalink.

5 Responses to Manchester, So Much To Answer For (Strange Fruit, 1990)