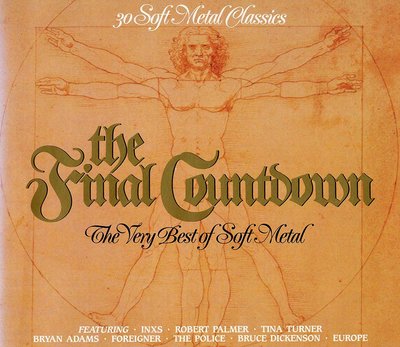 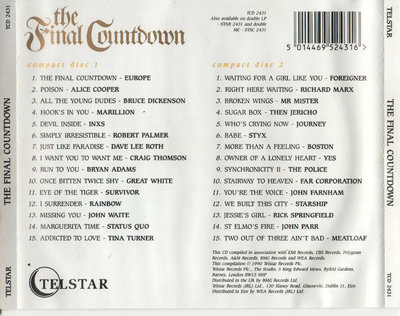 After the still-caned-everywhere title track (note: album take), Alice Cooper drops the trashy yet compelling Poison. Then there’s Bruce Dickinson’s expert version of All The Young Dudes, a legend covering a legend. Meanwhile Hooks in You was the first single from Marillion’s fifth album Seasons End and saw the debut of new lead singer Steve Hogarth who had replaced Fish. A more hard rock sound and ideally placed here. The vinyl pressing of The Final Countdown contains the longer Meaty Mix that was on the 12″ single. Equally interesting is the rare Australian Single Edit of INXS’ Devil Inside that appears on this double CD. It is a superbly atmospheric 45 that really benefits from the trimming. “She’s so fine, theres no telling where the money went” – Robert Palmer’s buoyant Simply Irresistible. Next, a perfect summer song in the form of David Lee Roth’s Just Like Paradise. Remember that rock climbing video, “A polished ode to decadence, with a chorus you would be unashamed to punch the air to.” (Charles Bottomley)

Closer each day: Craig Thomson is an Australian actor and singer, best known for playing Martin Dibble in Home And Away. His unremarkable cover of Cheap Trick’s I Want You To Want Me is here and on one other compilation. He is not to be confused with Craig McLachlan. Elsewhere Great White pull off a decent take of Ian Hunter’s Once Bitten, Twice Shy while Status Quo hit the ice on the still-burned-in memory of Marguerita Time. “Lost in a dream, lost in a fantasy.” Taken from the album Back To Back which was the last one to feature original bassist Alan Lancaster and drummer Pete Kircher. The former was no fan of Marguerita Time, which he thought was too pop-orientated for the group. When they appeared on BBC’s Top of the Pops to mime the single, his place was taken by Jim Lea of Slade, who were also on the programme that week. I’ll never forget Rick Parfitt falling into Pete Kircher’s drums near the end of the song while the music kept playing.

Disc 2 begins with two well known Waiting tunes from Foreigner and Richard Marx. The lesser known songs include Journey’s atmospheric Who’s Crying Now and Styx’s Babe – a slow set for when they were danced on one tile. Later on we get the album version of Yes – Only Of A Lonely Heart, a fine example of Trevor Horn pop perfection. Next comes the enigmatic Synchronicity II, third single from the final Police LP follows, full of in-built repression and a head of steam. Dig those post-apocalyptic squeals and crashing power chords. And for many, their introduction to Led Zeppelin came via the Far Corporation’s faithful cover of Stairway To Heaven, neatly preserved here. More: Jessie’s Girl, Rick Springfield’s stirring ode to unrequited love. For the grand finale, it’s Meat Loaf and the quintessential power ballad Two Out Of Three Ain’t Bad – hallelujah! it’s the 7″ single edit. This version downmixes the synthesiser considerably and replaces it with a much warmer and predominant string arrangement by Ken Ascher. In summary, 66% is a good result.

Marillion – Hooks In You

Lest we forget
Bruce Dickinson – All The Young Dudes