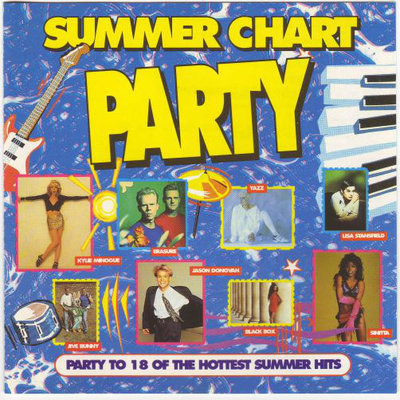 Review
“Party To 18 Of The Hottest Summer Hits” was the message of love. 1990: the new decade was still trying to establish itself. The creators of Summer Chart Party, Trax Music, exuded cheapness – from the tacky instruments on the front cover to the day glo cheesy photos of the stars. The chosen ones were Kylie Minogue, Erasure, Yazz, Lisa Stansfield, Jive Bunny, Jason Donovan, Black Box, Sinitta. And that bloody sun rising logo. Groove in yer heart. And for a fantastic review of Summer Chart Party, look no further than Tim Worthington. If you want more, there’s an expanded version of Tim’s feature in The Camberwick Green Procrastination Society, available in paperback or Kindle. You definitely won’t regret it.

Summer Chart Party found its way into my collection via an overflowing bargain bin in Shaws. Almost nationwide. £3.99 CDs weren’t exactly common in 1990 and as my DJing antics were finally about to gather moss, the investment felt solid. As for the concept, it was now autumn and I was starting ACA2 at Waterford RTC. Eight of the 18 tracks had topped the charts at some point over the previous three years. Take a bow then pop stars: Kylie Minogue – I Should Be So Lucky, Jason Donovan – Too Many Broken Hearts, Fairground Attraction – Perfect, Black Box – Ride Of Time, Yazz – The Only Way Is Up, Lisa Stansfield – All Around The World, Rick Astley – Never Gonna Give You Up, Jive Bunny – That’s What I Like. So a heavy PWL presence then – coming at a time when the label’s dominance was starting to slide. A dedication: special thanks to Adrian Fitt.

Kylie, Jason, Yazz and Fairground Attraction’s tunes all lit up The Greatest Hits Of 1988, a compilation that’s now a valuable time capsule of the year. Meanwhile Erasure, Lonnie Gordon and Candy Flip’s efforts remain immortalised on the wide-ranging popfest that is Now That’s What I Call Music 17. Three of the previous year’s massive #1s (Black Box, Lisa Stansfield, Jive Bunny) ended up on that excellent summing-up of late summer and early autumn 1989 that was Monster Hits. Rick Astley’s Never Gonna Give You Up is the oldest track here, almost three years old by the time of the compilation’s release. So who will survive and what will be left of them? Get in line for Damian’s hysterical Time Warp (The Classic RIP, every Friday) while Pat & Mick prove that they’re no one trick ponies with the frantic Use It Up And Wear It Out. The latter looking like Quentin Tarantino in the video.

Give A Little Love Back To The World, written and composed by Paul Curtis, was the United Kingdom’s entry at the Eurovision Song Contest 1990, performed by Emma, 15 years old at the time and the youngest ever UK entrant. The contest was held in Zagreb and Emma came in seventh place. A primary theme was unity and peace, given the recent fall of communism in most of Eastern Europe. Emma’s environmental tune bucked this and it subsequently made #33 in the charts. Rave on with Rob ‘N’ Raz & Leila K on the infectious Got To Get. +8 Don Pablo’s Animals’ energy rush version of Venus which actually closes the disc. But here’s to you, Mr Robinson: Stefan Dennis – yet another Neighbours star – and the brooding menace of Don’t It Make You Feel Good. Every single music video cliche shoe-horned into three and a half minutes. And in a circular way, the last word goes to Sinitta; the bouncing Right Back Where We Started From is possibly the most summery tune here, a fun cover of the 1975 Maxine Nightingale number, the year I went missing in Dunnes Stores, Salthill. “Do you remember that day (that sunny day)”

Favourite tracks
Pat & Mick – Use It Up And Wear It Out