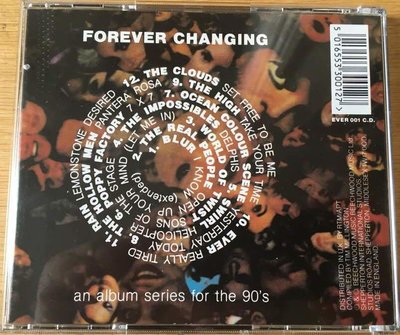 Review
Forever Changing was compiled by Tim Millington and released on the Beechwood Music label during 1991. Tim would later go onto play a leading role in the Indie Top 20 series, starting with Volume 12 that summer. Forever Changing is described as “An album series for the ’90s” but there was only one instalment. But what a one-off, a truly magical CD.

In keeping with the theme, sleeve notes for each track are written in a circular style. This makes them very difficult to transcribe but here you go:
Blur – I Know (Extended): “Blur are shaggable! No question about it.”
The Real People – Open Up Your Mind (Let Me In): “In Manchester, everyone tries to sound like the Happy Mondays and The Stone Roses. In Liverpool, everyone tries to sound like themselves.”
World Of Twist – Sons Of The Stage: “Bonkers, illusive and damn fine tunesmiths to boot, the mighty World Of Twist have ‘stars’ written all over them.” (NME)
The Impossibles – Delphis: “The tune combines their strong pop sensibility and close, considered vocal harmonies with remixes on the 12″ by Fluke and Boys Own DJs Terry Farley and Pete Heller.”
Swirl – Helicopter: “A conventional indie set up with added violin might lead one to expect Raincoats style trippery or even King Of The Slums brute force but these gals (and token guys, sorry) are orbiting a planet of their own making.”
Poppy Factory – 7×7: “…has a sparky synth backdrop with a My Bloody Valentine interlude, all pinned around the plaintive, grim ’60s kitchen sink character Charlie Bubbles – a classic debut.”

Ocean Colour Scene – Yesterday Today: “The clever money’s on Ocean Colour Scene to create the classic rock dreamscape LP of 1991.”
The Hollow Men – Pantera Rose: “Only the second song ever in the history of pop to contain the word effervescing.”
The High – Take Your Time: “Think big. Walk tall. Get high.”
Ever – Really Tired: “Young, dissolute and in love with The Song.”
Rain – Lemonstone Desired: “Purveyors of funky, melodic, charismatic rock pack a spirit punch in these days of technology-driven ‘flawless’ music.”
The Clouds – Set Free To Be Me: “Stockport’s sonic mushroom band.”

The CD begins with Blur. But back then, they’d just released one single – She’s So High – in October 1990. Many people forget that it was a double A-Side with I Know and it’s the latter track that’s here. A baggy, danceable tune that’s definitely inspired by The Stone Roses’ Fools Gold; we get the extended mix which appeared on the 12″ and CD single. If you want the 7″ version on CD then you need to get the zipped-up 10th Anniversary Box Set. On the US version of their debut album, Leisure, I Know was added to replace Sing which as considered too “arty” for the American market. Moving on to song 2, the drums usher in the psychedelic sound of The Real People. Open Up Your Mind could easily have nestled in between I Wanna Be Adored and She Bangs The Drums, a colourful kaleidoscope shuffle. Let Me In. “Deep in space we are.” Engineered and remixed by the mighty Paul Gomersall.

I was first introduced to the wonderful and frightening World Of Twist on Home. They set the bar even higher with Sons Of The Stage, unleashed March ’91. I remember the day I bought Quality Street, a gatefold LP with a thanks to Martin Hannett. Truly Madchester pop with a space rock edge. “Got to get down to the noise and confusion.” Best enjoyed with a green triangle or purple chocolate hazelnut. Next we have The Impossibles and the sprightly Delphis, like a baggy Lush giving it the shoegaze shuffle. Elsewhere the mostly melancholy Swirl emerge on Helicopter, taken from the Body EP on Playtime. It’s a slow burning number: “Call me The Collector / Call me The Healer.” that could have done with some editing. Closing off the first side are Poppy Factory and the sublime 7×7, another splash of colour as you lose touch with your mind. “Push your fingers through the sky…..”

The mystic trip continues: Ocean Colour Scene in an early starring role – the sparkling and overlooked Yesterday, Today was originally sighted on Snub TV, an illicit skipped lecture that turned into an afternoon bed-in. From Birmingham to Leeds and The Hollow Men’s Pantera Rosa, a gorgeous bit of indie shimmer. Over to David Cooper – “Bought the album after hearing this track when it came out. Great stuff. I’m 50 now but still a youth!” Still dancing in our minds are The High; Take Your Time plays like a much slowed-down Oasis, a deeply affecting tune. Meanwhile Ever’s Really Tired reminds me of McCarthy as it soars in beautiful narcolepsy. Back to Liverpool for Rain and Lemonstone Desired, sounding like a lost LA’s 45. They didn’t last. Finally it’s Bruce Starbuck and Vincent Van Void AKA The Clouds and the relentless obscurity Set Free To Be Me, an atmospheric epic conclusion.

Favourite tracks
World Of Twist – Sons Of The Stage

Lest we forget
Poppy Factory – 7×7