Review
The heyday of the Christmas RTE Guide was 1977 to 1982. 1977 was magical because Christmas Eve fell on a Saturday which meant that two weeks of great television in one channel land lasted the entire duration of Christmas, finishing on 6 January. 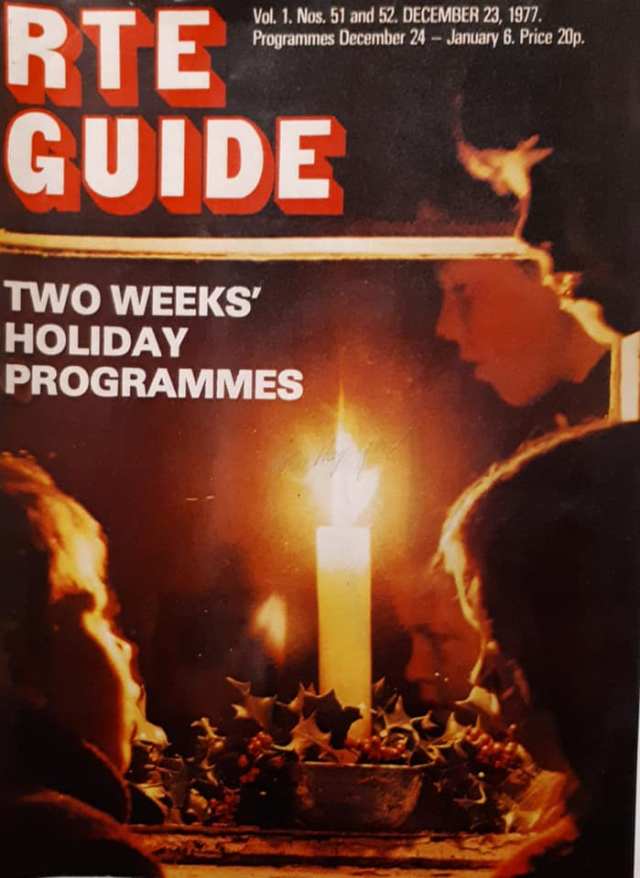 1978 was nearly as good; the highlight being daily runs of Augie Doggie & Doggie Daddy during the second week. 1980 was a leap year which meant that the Christmas TV stopped on 2 January. The Christmas night movie was The Towering Inferno; all my cousins were talking about the following day. By 1982, the calendar had moved against us (as far as possible – or so I believed) and the guide covered the 18 – 31 December period. Of course that meant the run up to Christmas Eve had some special programmes. And who can forget the teary film as we scoffed the Santa sweets – The Champ. By the way – in 1981, we got Gone With The Wind which was immense. In December 1983 I fully expected a return to the glory days of 1977; however when the RTE Guide appeared in the shops a week earlier than expected, it felt like a massive kick in the stomach. 17 – 30 December? You cannot be serious. One of childhood’s biggest disappointments.

As remembered in Reflections, Christmas was always spent in The Good Room. The tree (always a real one) was generally put up around 7 to 10 days beforehand, the decorations familiar and well-loved: the upright mice with green and red coats, the gold and purple bells, the lights in the shape of windows. Presents would go under closer to the time; sweets, chocolates and biscuit tins wrapped in paper from Nolan’s; their varying shapes a giveaway. Occasionally there were gifts from a relative in the USA. We wouldn’t actually move into The Good Room until Christmas Day so it always had a sense of exclusivity.

I was home last Easter; the harshness of growing old was becoming more pronounced. My Dad wasn’t well but was in good spirits. The emergency doctor assured him and us that it was a mild infection and he would be up in no time. My visit was brief; I was back in my house a couple of days later when the call came through that he had been brought into hospital. Updates continued through the evening, becoming more grave and ominous each time. Finally the 3.00am call; an unsuccessful operation, nothing more to be done. Sleep did not come but the advice was to wait until morning before travelling. And to pack a suit.

I cannot drive in silence; it is unnatural to me. I selected Moods for the journey down, the rationale being that I needed some soothing and relaxing as I prepared myself for saying goodbye and what would happen in the following days. All those arrangements that would have to be made, contacting relatives that I hardly ever spoke to, the prospect of shaking hands a thousand times, dealing with the aftermath and the emptiness. The trip down was a haze, I was down by 9.00am, Mike Oldfield’s cover of ABBA’s Arrival a bittersweet finale.

The meeting with the medical team was blunt, brief and stark. We were given two choices: do nothing and death would follow or a last gasp second attempt at surgery with the odds heavily stacked against us. We voted for action despite the poor prognosis and went back home to wait. The call came that evening, a tentative result. The relief was great. Intensive care, high dependency, all of these became part of our lives over the following 11 weeks as slowly, things started to improve. Hospital and home visits became weekly (sometimes I’d go down twice a week) rather than the previous infrequency. My car racked up more miles than ever before, each journey soundtracked by something different. From Now 100 Hits Forgotten 80s to Give ‘Em Enough Rope via Squirrel & G-Man and a side order of Berlin.

Moods is subtitled “a contemporary soundtrack” and was compiled by Ashley Abram for Box Music Limited. The mournful Gregorian vocals on opening track, Sadeness (Enigma), seemed entirely appropriate on that Tuesday morning drive last April. In 1991 – when I first purchased the CD – this type of music was primarily played in the dead of night, so as not to disturb neighbours in the other bedsits. No escape from television for track 2, Jan Hammer’s gorgeous Crockett’s Theme. Word: “Crockett and Tubbs were cool when cool had nothing to do with tattoos, nose piercings, or untrimmed goatees.” Completing this familiar opening trilogy is Enya’s sweeping Orinoco Flow. All three tracks (and many more on this compilation) would also appear on 1994’s Pure Moods, a re-booted version of this compilation – on the Virgin label and ubiquitous on late night shopping channel adverts.

Elton John’s Song For Guy appears here as the 7″ single mix, 5:02. As the sleeve states: “… As I was writing this song one Sunday, I imagined myself floating into space and looking down at my own body. I was imagining myself dying. Morbidly obsessed with these thoughts, I wrote this song about death. The next day I was told that Guy (Burchett), our 17 year-old messenger boy, had been tragically killed on his motorcycle the day before. Guy died on the day I wrote this song.” Love, death and sadness – such a powerful piece. Conversely, it’s the longer album version of Kenny G’s Songbird that follows before the haunting strains of Twin Peaks Theme (Instrumental). Erroneously credited to Julee Cruise rather than Angelo Badalamenti, this never fails to evoke immense nostalgia for a better time and place. “One day, the sadness will end.” (Catherine E. Coulson 1943-2015)

In keeping with the time of the year, Ryuichi’s Sakamoto’s instrumental beauty Merry Christmas Mr Lawrence is a key theme from the formative building blocks of my record collection. Just as powerful as the vocal version featuring David Sylvian, as Shastri says “this sounds like an old heartbreak that you occasionally revisit at 2.00am, still hurts but you’re okay with it now.” Next is the dramatic Chariots Of Fire theme, the real deal from Vangelis. The second half of the voyage opens with Praise and Only You, initially featured on a Fiat Tempra advertisement. Praise consisted of a London-based trio of accomplished composers/instrumentalists Simon Goldberg and Geoff McCormack and vocalist Miriam Stockley. The track is almost tribal in execution but the ultimate feeling it evokes is one of contemplation and relaxation. Let the sunshine in. Most of the cars will be in scrapyards.

The inclusion of the evocative Lily Was Here means that nine of the opening 10 tracks would also feature on Pure Moods. For something completely different, we look at Van Morrison’s Poetic Champions Compose and the divine jazz of Spanish Steps. We stay Irish for the next number, Micheal O’Suilleabhain’s Ah, Sweet Dancer, a fabulous piano piece. And now to Oxford: the atmospheric theme for Inspector Morse was written by Barrington Pheloung and utilises a motif based on the Morse code for “M.O.R.S.E.” A familiar poster on many student walls of the time was Betty Blue. Gabriel Yared’s C’est Le Vent, Betty buries itself right into your soul, a sublime and enchanting composition. Inevitably where there are instrumentals, there is Chi Mai. Here is no exception. Finally, we end with Mike Oldfield’s stirring take on Arrival, so very Mike but a brilliant salute to the original.

In 1994, the compilation was issued in The Netherlands with an almost identical sleeve. EVA was the label and while there was some crossover, it’s also worth a purchase given that it offers Enigma – Return To Innocence, Art Of Noise – Moments In Love, Alan Parsons Project – Pipeline, Harold Faltermeyer – Axel F, Propaganda – La Carne, La Morte E Il Diavolo, Kitaro – Light Of The Spirit, Roxy Music – Tara, Clannad – Theme From Harry’s Game, Yanni – Swept Away, Jon & Vangelis – Garden Of Senses, Michael Nyman – Theme From The Piano. In a superbly apt white CD tray. Check it out here.

This entry was posted in Moods. Bookmark the permalink.