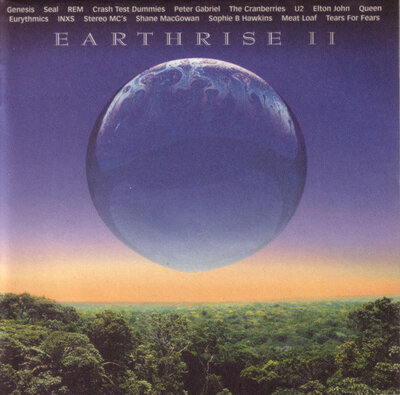 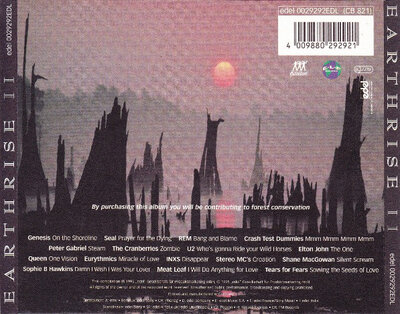 Review
“In the time it takes to listen to this album, four more species will have become extinct.”

The long-awaited follow-up to Earthrise: The Rainforest Album was released at the start of summer ’95, when the sun burned brightly for four consecutive months. The thick booklet mentions useful ways and tips to become more aware amid stern and uncompromising messages from the likes of REM – “To talk of saving the environment for your children is to remove the urgency for action. Save the environment for yourself.”

Like the first album, Genesis steal the show. On The Shoreline was originally released as a B-side to the I Can’t Dance single and many say that it’s superior to numerous songs that did make that LP. I first encountered it on the flawed but fascinating Genesis Archive 2: 1976–1992 where it kicked off CD1. Subsequently it also commenced the bonus disc in the Genesis 1983-1998 box set; a most rewarding round-up of bonus material from their much maligned pop era. The only problem I have with that release is that it excludes a number of Calling All Stations B-sides and edits. In another world, the following list could become an ideal disc 2 to a deluxe edition of said album:
01 Congo (Edit)
02 Not About Us (Radio Edit)
03 No Son Of Mine (Acoustic)
04 Lovers Leap (Acoustic)
05 Turn It On Again (Acoustic)
06 Dancing With The Moonlight Knight (Acoustic)
07 Follow You Follow Me (Acoustic)
08 Not About Us (Acoustic)
09 Second Home By The Sea (Edited Version)
10 Phret
11 7/8
12 Papa He Said
13 Bango Man
14 Anything Now
15 Sign Your Life Away
16 Run Out Of Time

Move over darling, it’s Seal’s gloomy but glorious Prayer For The Dying. Portentous and haunting, this bleeds ’90s. Next – in a remarkable piece of sequencing – are REM and the pivotal Bang & Blame. An emotionally complex track from the underrated Monster LP, here we’re treated to the single edit. And from the best compilation of the previous year Now That’s What I Call Music 29 come the brilliant brace from Crash Test Dummies and The Cranberries. In between sits Peter Gabriel with his most successful 45 since 1986’s Sledgehammer. Steam, with its oblique video of sexual symbolism appears in its Us album form, running just over six minutes. Next are U2 and the heady Who’s Gonna Ride Your Wild Horses, a fifth and final 45 from the Achtung Baby LP. Also nominated for the Brit Awards 1993 was Elton John’s The One, an epic performance containing a top piano solo.

Just like on One Voice One Love, we find Queen and the single version of One Vision. It leads into Eurythmics’ Miracle Of Love, the show-stopper from the uneven Revenge. A sweeping and melancholic gem with a moody video of dark rooms and military action. Next are INXS and the still-relevant Disappear – “And the world seems to disappear.” Elsewhere the single mix of Stereo MCs’ Creation is a welcome excursion into beat territory and a track that both indie and dance fans dug in the winter of ’92. Coach Bar special. In a surprise move, Shane MacGowan’s Silent Scream is a pleasantly sung tune which doesn’t appear to have any Popes involvement. That just leaves a love trilogy finale: Sophie B Hawkins’ plaintive Damn I Wish I Was Your Lover, Meat Loaf’s I’d Do Anything For Love (Video Version!) and Tears For Fears’ sweeping Sowing The Seeds Of Love.

Lest we forget
Genesis – On The Shoreline

This entry was posted in Earthrise. Bookmark the permalink.