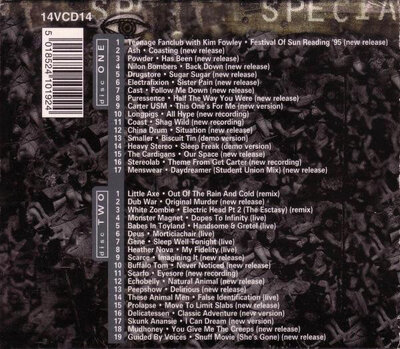 Review
Volume went double on its 14th outing. Released to coincide with the 1995 Reading Festival, it’s a 36 track extravaganza that would have made a mostly killer single disc. Artwork credited to Johnny Took. Acid by Alan Russell Cowan. Pictures by Beek.

It’s a rustic start as Teenage Fanclub back up Kim Fowley on what’s effectively the title track, Festival Of Sun Reading ’95. They ran into each other when Kim was producing the new BMX Bandits single in Glasgow. The interview and band history are illuminating – The King LP was a tribute to Kramer from Seinfeld(!) while Bandwagonesque verdict is “We’re as happy with it as we can be given the money we had to do with it.” They’re not as bummed out on Thirteen as you’d expect but The Clash – hmmmm – “They turned out to be a total sham, a really rich guy talking a load of bullshit.” Of course, Grand Prix was out then and establishing itself as a summer epic. Next are Ash and the wistful yet melodic Coasting, lifted from a 1994 Evening Session. Maturity beyond years. After Powder’s rather abrasive Has Been, Cheltenham’s finest – Nilon Bombers – explode in a heady kaleidoscope of twee fury with Back Down. More tea? Take Drugstore’s Sugar Sugar which pales against Sakkarin’s 1971 cover before Electrafixion’s moody remix of Sister Pain.

Walking alone, Cast are the last to be interviewed and occupy pages 188-192. The band nominate their favourite places in Liverpool. We get an exclusive version of Follow Me Down that’s just ace. Island slowburners Puressence follow with the sublime Casting Lazy Shadows B-side, Half The Way You Are. Staying with flips, Carter USM’s This One’s For Me is a previously unheard version of the B-side of The Young Offender’s Mum which was re-recorded by the band to replace the less fancied original. Moody brilliance. Also deserving of that description is The Longpigs’ All Hype with its quiet / loud dynamics while Coast’s Shag Wild blends powerpop with Blur-ish harmonies to good effect.

Keeping the riffs alive are China Drum and their grungy swagger anthem Situation which works just fine in this company. We go into the demo arena next with Smaller (Hey Digsy!) and the badly drawn Biscuit Tin. Following are Heavy Stereo and the pop blasted slice of glam Sleep Freak which was good enough to get them signed to Creation. Then we go down the (Emmerdale) farm to see The Cardigans’ play Our Space which brings a more relaxed swing to our mood. Filed alongside and in what’s an expert example of sequencing are Stereolab and their bloody brilliant take on Roy Budd’s Get Carter theme. A favourite from the VHS collection in those days, endlessly re-watched. Great text here as Tim Gane waxes about favourite soundtracks. This was imperial Stereolab, the era from Bachelor Pad to Emperor Tomato Ketchup via the oblique 10″ Music For The Amorphous Body Study Center. Bringing CD1 to a close are Menswear and the brooding Student Union Mix of Daydreamer. A true mantra: “Menswear are whatever you want them to be. Enjoy.”

CD2 starts with the blues spirit of Little Axe’s Out Of The Rain And Cold – “they don’t recreate the past, they remix and reinvent it.” Next comes the reggae dancehall meets punk sound of Dub War and the snarling Original Murder which is followed by White Zombie’s intense remix of Electric Head Part 2 (The Ecstasy). Rob fondly speaks of his Charlton Heston love – The Omega Man and Soylent Green being particular favourites – and for me as well, off-air classics. Then we get a sequence of live tracks – understandable given the festival connection but not exactly welcome. Monster Magnet – Dopes To Infinity and Babes In Toyland – Handsome & Gretel both burn with self-righteous fury but ultimately do nothing for me anymore. Even worse are the completely rubbish Deus with the appalling dull Morticiachair. Thankfully things pick up with a storming Sleep Well Tonight by Gene, performed at The Forum London on 31 March 1995. The interview sees Martin Rossiter flying the red flag and castigating Gary Numan and the “right wing pop world.” Next come Heather Nova and the catchy yet sensitive strum of My Fidelity.

The text is out of sequence so it’s a constant back and forth with the pages. Scarce’s Imagining It is heartfelt acoustic sweetener that links in well to Buffalo Tom’s emotive Never Noticed. +Scarfo and the static jive of Eyesore which contrasts greatly with Echobelly’s tuneful Natural Animal (Remix) – it’s on Sonya! There’s more melodica on Delirious, a driving tune from the youthful Peepshow while These Animal Men swim against the tide on an energetic live take of False Identification. Full of eastern promise: Prolapse’s demo of Move To Limit Stabs. Elsewhere Delicatessen’s off-kilter and re-recorded Classic Adventure plays like a moth up your nose. At this point we’re drifting with Skunk Anansie’s tired I Can Dream adding no value while Mudhoney’s You Give Me The Creeps is the sound of a band with their best years behind me. Thankfully we end of a high with Guided By Voices. Curiously the song is called Snuff Movie (She’s Gone) but some of you will recognise it off 1996’s Tonics and Twisted Chasers LP under the title Reptilian Beauty Secrets. 100 seconds of lo-fi brilliance. Over and out.

Carter USM – This One’s For Me (Alternative Version)

Stereolab – Theme From Get Carter

Lest we forget
Ash – Coasting

This entry was posted in Volume. Bookmark the permalink.