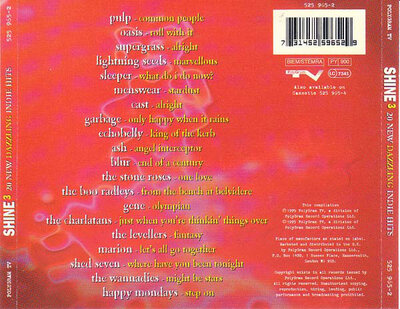 Review
Where Shine Too was “Brilliant”, the third volume screamed “Dazzling” on the inlay tagline. Namechecked artists – Oasis, Blur, Supergrass, Pulp, Menswear, Sleeper, Cast, Gene, Echobelly, Lightning Seeds. The first two releases are shown as “also available”. This is one of my favourites, mixing the fabulous, the familiar & the forgotten to great effect.

Like Oasis, Pulp made it three appearances out of three and take their turn to kick off. Common People needs no introduction; yes, it is the single version here. We got the B-side Underwear on the previous volume of Shine. My favourite sleeve on Different Class is the one of Candida; still the album that 1995 must be measured against. Note that deluxe edition only includes the demo of Ansaphone; if you need the regular mix, check out the 2CD French pressing from the time. Oasis inferior Roll With It is next, a record defined by its B-sides Rockin’ Chair and It’s Better People. Oh for another Masterplan (2): see my review of Now That’s What I Call Music 1998: The Millennium Series for more on that subject. Completing the front-loading are Supergrass and the buoyant banger Alright, bringing me back to the balmy late nights on Moyne Road. Dropping down a gear in terms of immediacy come the Lightning Seeds and the jolly genius of Marvellous, a #24 hit from the cramming ‘n’ panic era. “Wake up – this is the time – you know I’m right.”

Sleeper’s What Do I Do Now? is a fantastic slice of wistful indie pop that’s played perfectly, less barging than normal and all the better for it. A Thoughtforms for the mid-90s. Next are Menswear and the hollow fizz glam of Stardust. Reminds me of Rí-Rá’s dark corridors and the prospect of “work in six hours” – when the answer was to order another vodka. Another biggie called Alright; this one by Cast from the superb All Change, the best selling debut in Polydor’s history. And Garbage as the misery pours down on the shimmering Only Happy When It Rains. “You wanna hear about my new obsession? I’m riding high upon a deep depression.” Moving on, next come Echobelly on the impossibly catchy King Of The Kerb which in turn blends into Ash’s absolutely joyous rush of Angel Interceptor, from a time when each of their stunning singles seemed better than the last. Bringing down this heady sequence are Blur and their late ’94 single End Of A Century, a mostly melancholy mediation and brave choice rather than giving us Country House yet again.

The Stone Roses were on the festival circuit during the summer of ’95, touring The Second Coming. However we go back five years here and it’s the 7″ mix of One Love. Out of place but welcome seeing as the band couldn’t be bothered including it on their £££ super deluxe edition of the debut album. It’s followed by one of the most underrated 45s of the time, the Boo Radleys’ gorgeous part-psych From The Bench At Belvidere. Meanwhile, Gene continue to build and build with the majestic Olympian, title track of their perfectly formed debut. Over to Dean Mitchell: “Quite simply one of the most perfectly crafted slices of indie pop every created. The way it caresses you as it builds and then that spine tingling climax.” Killing me every time is the line where Martin Rossister sings “I can only be normal with you.” The large format booklet that comes with the LP reminds me of the one in the Nick Drake Fruit Tree set, originally released as a 12″ x 12″ package. J Creed.

It’s a matter of taste but I think that The Charlatans’ Just When You’re Thinkin’ Things Over is a perfect summer 45. The CD single contains two tracks remixed by the Chemical Brothers. Underrated and almost forgotten now – steamrolled in the battle for number one. It was the third single from their self-titled fourth LP and was included on both Melting Pot and Forever compilations. Next come The Levellers and the raucous Fantasy, more enjoyable than usual in these fine surroundings. Meanwhile Marion’s Let’s All Go Together sounds almost goth-like in its delivery, memories of a long-gone mixtape in Richie’s. Plus it’s great to hear Shed Seven’s twisty epic Where Have You Been Tonight for the first time in years. Next it’s The Wannadies and the endearing spiky banger Might Be Stars. Live forever etc. Finally, we end with an oldie – Step On – presumably included because of its inclusion on their contemporary compilation Loads. The Discogs entry for Shine 3’s notes it as “Step On ’95” but to me it sounds just like the 5:19 version on Pills ‘N’ Thrills And Bellyaches. A Black Grape would have been better but was presumably difficult to licence. Only a sucker could think that this party would ever come to an end.

Lest we forget
Sleeper – What Do I Do Now?