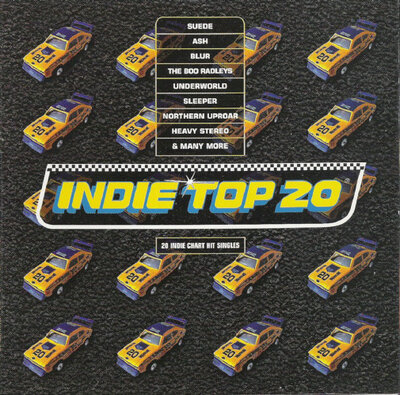 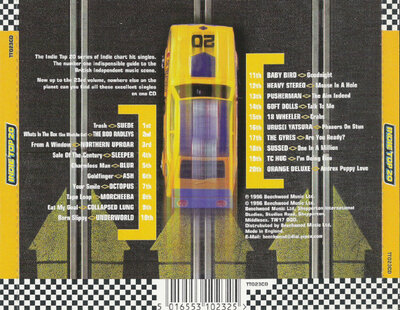 There were no signs that this would be the last chapter. “The Indie Top 20 will be back in a few months to deliver another unique collection of what’s going on at the cutting edge of the Indie scene.” One of the problems was Shine stealing a march on a number of tunes:
Shine 4: Northern Uproar – From A Window
Shine 5: Ash – Goldfinger, 60 Ft Dolls – Talk To Me
Shine 6: Suede – Trash, Boo Radleys – What’s In The Box, Sleeper – Sale Of The Century, Blur – Charmless Man, Babybird – Goodnight, Sussed – One In A Million

If you had a pick a track to symbolise a lost Britpop classic then look no further than Octopus. Ace. Inspired by Syd Barrett and signed to Food Records, Your Smile is A+ joy, a psychedelic gem with severe baroque undertones, something that wouldn’t sound out of place on a Fading Yellow CD. Next comes the rather anodyne sound of Morcheeba and the monotonous Tape Loop. There’s a bit of fun on the horizon with Collapsed Lung, frequently confused with Compulsion, and their amusing party tune Eat My Goal. Taking its name from an Alan Partridge clip on The Day Today, the track proved to be a pleasant diversion in a big beat style. “This energy of movement, and of time and place” was Rick Smith’s verdict on Underworld’s Born Slippy, the essence and spirit of 1996. Highs & lows.

Heavy Stereo also throw us back to an earlier era with the whimsical Mouse In A Hole before Pusherman’s rather alienating heavy riffage of The Aim Indeed. Elsewhere 18 Wheeler – more Creation hopefuls – serve up the melodic Crabs. We’re treading water but are then saved by the Slacker meets Manga awesomeness of Urusei Yatsura’s Phasers On Stun. They played The Mean Fiddler and UCD Bar on successive nights and I interviewed them for Why Me? Hard to get them to talk but great live. Their joyful debut album still gets a spin, majestic rock. Sadly we’re slap bang back in ordinary world with The Gyres’ derivative Are You Ready while TC Hug’s I’m Doing Fine brings forth memories of The Family Cat’s melody lines. And so we come to the final track of the series; from the ashes of Five Thirty, here are Orange DeLuxe with their melancholy Andrex Puppy Love, a rather sweeping turn-on-the-lights-and-go-home type of number. Time now folks, please!

Northern Uproar – From A Window

Lest we forget
Octopus – Your Smile