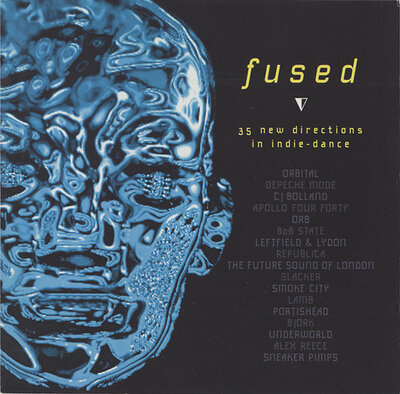 Fused reminds me of catching the DART home after a tough day at work, sometimes in the wake of a few pints in McDonagh’s. Headphones on, watching the city go by. The Orbital’s version of The Saint theme starts CD1; creepy, innovative and loaded with strings. It’s followed by the spacey Hardfloor remix of Depeche Mode’s It’s No Good, probably my least favourite of the four Ultra singles but sounding marvellous in this environment. And then Slacker’s Scared, where the samples are:
Girl talking is from a 1966 album just called LSD – a promo vinyl album featuring Timothy Leary. Track 3 The Lost Generation (Excerpt)
Breakdown eerie synth – Peter Gabriel & Ravi Shankar – Of These, Hope – Reprise from the Last Temptation of Christ Soundtrack. See my From Dusk Till Dawn project
Guitar loop is Harold Melvin – Don’t Leave Me This Way
Fiery brimstone next as CJ Bolland cranks up The Prophet which is inevitably followed by The Prodigy’s hot Firestarter. In the midst of life come Leftfield & Lydon with Open Up.

RIP Eddie Van Halen. Apollo 440’s Ain’t Talkin’ ’bout Dub is built on a sample of the lead guitar from Van Halen’s Ain’t Talkin’ ’bout Love”. The beginning of the song contains a sample from the 1971 film The Andromeda Strain, now on Arrow BD. It was also the time of heady Charlatans’ remixes, Nine Acre Dust courtesy of the Chemical Brothers. You’ll remember it from their mix album Live At The Social Volume 1. Moving on, mobile phones really kicked into life during 1997. Ericsson, Motorola, Nokia. Republica’s Ready To Go was an anthem for the pay as you go generation. Afterwards we take a Latin detour with 808 State’s exotic Lopez (featured James Dean Bradfield, remixed by Propellerheads) and The Grid’s moody flourish Diablo. All in all, a great build up to the joyful Perfecto Mix of New Order’s World. That’s the price of love as I write this review on the 41st anniversary of Ian Curtis’ death. The ideal song for early Friday morning driving to work in the sunshine.

There’s more of Paul O on Grace’s Skin On Skin (Oakenfold And Osborne Mix), a superb edit of a spectacular extended mix. Zipping past the over-familiar Children by Robert Miles, we’re in prime UFO territory with Lithium & Sonya Madan’s impressive Ride A Rocket which goes some way in compensating for all those disappointing Echobelly records. Step back for a bit and think of that Smirnoff advert, which was soundtracked by Dylan Rhymes breakbeat jam Naked & Ashamed. Or else you’ll remember it from Need For Speed. Or FIFA for life. CD1 ends with the evergreen Higher State Of Consciousness (Dex & Jonesey’s Radio Edit), lifted from the ’96 CD single. KAMs in the kitchen, 2.00am.

CD2 launchs into Orblivion with the nihilistic beats of Asylum, thankfully the taut 7″ edit. Forever futuristic, a total multi dimensional trip. Grifters Smoke City then serve up the atmospheric Bond-esque Underwater Love before we get the cloudy claustrophobia of Portishead’s amazing Sour Times. All of this leads up into the absolute highlight of the set, Lamb’s hypnotising Gorecki, a true peak of trip hop, sold to me courtesy of Goldie in Freebird Records. The film of the same name – starring Liam Neeson – was broadcast on 27 December 1986. It’s exceptionally bleak. And as if my magic, Underworld drop in Dark & Long while Orbital make everything seem edgy with the menacing strains of The Box. Breaking the spell are the ordinary Morcheeba with the admittedly satisfying Trigger Hippie and the Sneaker Pimps with the tasty Spin Spin Sugar, all driving beats & atmos.

Bjork’s show-stopping Hyperballad is the Post version while Portishead pop up again in cahoots with Paul “Fat Pop” Weller on the minimal Sheared Wood remix of Wild Wood. Next are The Aloof with the symphonic, almost dubby melancholia Wish You Were Here. The thrills continue with another collaboration, this one comprising of Leftfield and Curve’s Toni Halliday. Original is a gloomy cracker from March 1995 and the centrepiece of Leftism. It’s followed by Creation kids 18 Wheeler getting reworked by William Orbit – he does a good job on Stay. Elsewhere Papua New Guinea remains one of the definitive anthems of the era lifting the vocals of Lisa Gerrard lifted from Dawn Of The Iconoclast. After A Guy Called Gerald’s unremarkable So Many Dreams (Aquasky Radio Edit), we get Goldie’s sunrise anthem Angel, perfect for the end of an all-nighter. It’s paired well with Alex Reece’s fresh and heavenly Feel The Sunshine featuring Deborah Anderson’s ace vocal. Last orders to Bomb The Bass and Spikey Tee with the underrated Dark Heart.

The Aloof – Wish You Were Here (Radio Edit)

This entry was posted in Dance UK. Bookmark the permalink.