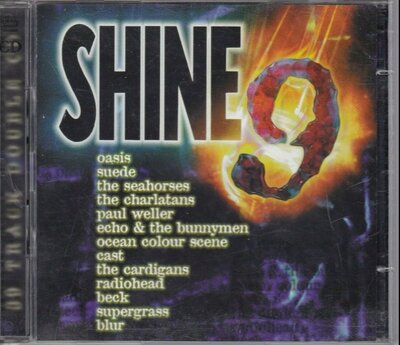 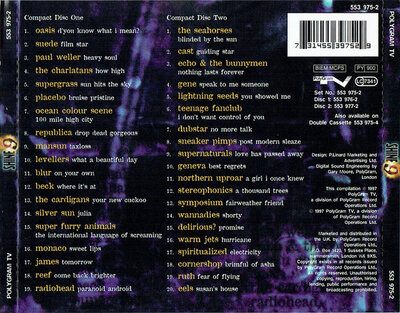 Review
The artists chosen to feature on the front cover of Shine 9 are Oasis, The Seahorses, The Charlatans, Paul Weller, Echo and The Bunnymen, Ocean Colour Scene, Cast, The Cardigans, Radiohead, Beck, Supergrass and Blur. You could still win a Discman.

Start: The meandering D’You Know What I Mean? sent out a warning bell; the new Oasis album, Be Here Now, was gonna be more complex and less immmediate than the first two LPs. They weren’t wrong. I’m still trying to work out if there’s a Jesus Jones tribute in the chorus. Next come Suede and another barnstormer from Coming Up; the brief yet brilliant Filmstar was backed with the epic Duchess and Graffiti Women on CD1. The former was chosen as the closing track on B-sides LP of the 2016 reissue, on beautiful translucent yellow vinyl. Moving on with Paul Weller’s earthy Heavy Soul, the title track of his most enjoyable fourth solo record. On the album, the song appears in two parts; it’s a joy to know. And The Charlatans with the soaring, joyfully melodic How High before Supergrass launch another mod rocket, the sharp shock of Sun Hits The Sky. No time to catch breath, as Placebo’s squall continues on the frantic Bruise Pristine. As Fionn says “Placebo’s debut LP has this weird quality of sounding incredibly ahead of its time, yet also of its time.”

Ocean Colour Scene’s 100 Mile High City is the sound on the band on top form, the fiery ignition key for the enjoyable Marchin’ Already. Elsewhere there’s Republica’s brash Drop Dead Gorgeous and Mansun’s Robin Hood banger Taxloss – remember that video? While not a fan at the time, The Levellers’ What A Beautiful Day has grown on me over the years, an optimism burst of catchy, unscorned simplicity. Meanwhile Blur’s mighty successful reinvention continues as On Your Own makes it three hits in ’97, a melting pot of styles and a template for Gorillaz. Another four letter word: Beck’s Where It’s At is a welcome inclusion, albeit it’s the long album version. I never tire of hearing the glorious Mantronix sample from Needle To The Groove. The LP was produced by the Dust Brothers EZ Mike and King Gizmo, famous for their magical work on The Beastie Boys’ Paul’s Boutique.

The Cardigans and Your New Cuckoo shows the Swedes at the top of their game, knocking out an exquisite bassline. Next are Silver Sun with Julia which is not a Eurythmics cover but more indie by numbers. Thankfully the Super Furry Animals restore order with the wonderfully throwaway The International Language Of Screaming. I’m immediately transported back to watching repeats of Mind Your Language on UTV. Next are Monaco with the empty club sound of Sweet Lips which manages to pale in comparison to James’ stirring Tomorrow, single #2 from Whiplash, uptempo and approaching the stadium rock of U2. All that’s left on disc 1 is the charmless sound of Reef’s Come Back Brighter before Radiohead’s circular and cryptic Paranoid Android; four distinctive sections and no edit.

“The Seahorses: The music industry’s equivalent of a revenge shag.” (Land Crab)
And so say all of us; CD1 kicks off with the anthemic Blinded By The Sun, gliding along with an undefinable swagger. They supported The Rolling Stones, U2, and Oasis in those times. Next are Cast, on their second wave; the underrated guitar gem Guiding Star. 1997 was the year when Ian McCulloch, Will Sergeant and Les Pattinson reformed Echo & The Bunnymen. Evergreen was the album and the gorgeous – yet melancholy – Nothing Lasts Forever was the lead single. Equally powerful are Gene with the masterful Speak To Me Someone, still sending chills up the spine. “So what do you think of Joy Division then?”
“I prefer their earlier stuff.”

The Lightning Seeds cover The Turtles’ You Showed Me is a pretty faithful rendition but is immediately blown away by the next tune, Teenage Fanclub’s soaring & hooky I Don’t Want Control Of You. Lifted from the magnificent Songs From Northern Britain, that’s my mid-20s soundtracked perfectly. Next are Dubstar with the somewhat underrated No More Talk, reminding me of a female-led PSB while the Sneaker Pimps Post Modern Sleaze neatly drops the tempo into something very atmospheric. Keeping a dark tone are The Supernaturals and Love Has Passed Away while Geneva prove themselves to be a flash in the pan with the monochrome Best Regrets. Things stay dull as Northern Uproar’s A Girl I Once Knew fails to fulfil earlier promise while neither The Stereophonics’ hoary A Thousand Trees or Symposium’s clumsy Fairweather Friend really haven’t aged well.

Poptopia! It’s The Wannadies with the catchy power pop of Shorty; a fine reminder of Streatham 1998 where they had just got the internet in Sunny Hill Road. In the same vein later – Ruth’s Fear Of Flying. Next is the moody Promise by Delirious which in turn is followed by the Warm Jets TFI Friday-ish Hurricane. Ladies And Gentlemen We Are Floating In Space remains one of the best albums of ’97 and Electricity was a fine, driving 45. Perfect for speeding out of the city. Meanwhile Cornershop would go onto top John Peel’s Festive 50 of the year with the original version of Brimful Of Asha, featured here. AKA Short Version (Berkeley), a tribute to Indian playback singer Asha Bhosle and not to be confused with the Cocteau Twins tune Athol-Brose or the supermarket chain Asda. Finally it’s those beautiful freaks – Eels – spinning a spooky tale, Susan’s House.

Teenage Fanclub – I Don’t Want Control Of You

Gene – Speak To Me Someone