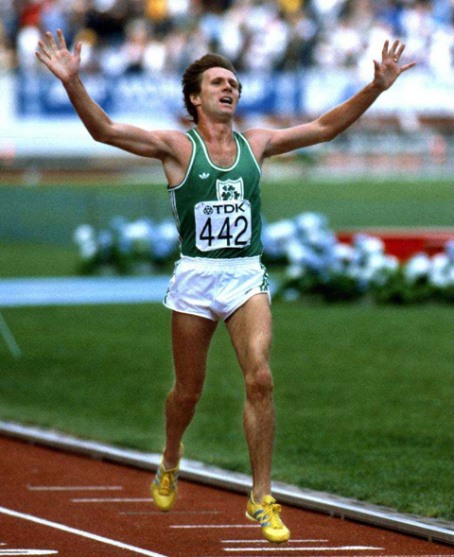 Hot ’80s takes a look at my musical memories from five of the decade’s summers and distills each one into a single disc playlist. For this exercise, I’ve chosen 1981, 1983, 1984, 1987 and 1989. Once again, you won’t necessarily hear the biggest hits of the period; more the ones that stuck with me then and still do now. The cover photograph is of Eamonn Coghlan winning gold at the World Championship 5000m in Helsinki, 14 August 1983.

1981 was a pivotal summer. There was much greater awareness of what was happening in the charts and while I still didn’t own any records, I had built up a tiny collection of taped tapes. Some from the radio, others nth generation copy compilations. Our summer holiday that year was spent in Courtown Harbour, a glorious week that August. Vangelis’ Third Movement became the theme for the American television documentary series, Cosmos: A Personal Voyage by Carl Sagan which was broadcast on BBC1 that June. It sets the scene for the initial synth pop sequence on the playlist. Elaine Paige’s Memory was a favourite of my mother’s; the Stages LP was a fixture in our Good Room from 1983 onwards.

1983 was a very hot summer, especially July. Clannad’s Newgrange (released to coincide with the Solstice) acts a precursor to a wide variety of pop selections. Many of them blared out of the radio at the top of the drills on the farm where we picked strawberries. There are some deliberate juxtapositions – the Watching pair plus Bruce Foxton followed by Weller’s new mob. Thin Lizzy’s The Sun Goes Down makes for a thoughtful conclusion. We stayed in Courtown again – the third and final year. A daily treat of HB ice cream was still vital.

Part 3: Summer 1984
01 Jeffrey Osborne – On The Wings Of Love
02 Windjammer – Tossing & Turning
03 Phil Fearon featuring Galaxy – Everybody’s Laughing
04 Scritti Politti – Absolute
05 Mike Oldfield – To France
06 Bananarama – Rough Justice (7″ Mix)
07 Talk Talk – Dum Dum Girl
08 A Flock Of Seagulls – The More You Live, The More You Love
09 Orchestral Manoeuvres In The Dark – Talking Loud And Clear
10 Billy Idol – Eyes Without A Face (7″ Mix)
11 Elton John – Sad Songs (Say So Much) (Single Mix)
12 Spandau Ballet – Only When You Leave (7″ Version)
13 Elvis Costello & The Attractions – I Wanna Be Loved
14 The Farmer’s Boys – In The Country
15 Tracey Ullman – Sunglasses
16 Lloyd Cole & The Commotions – Perfect Skin
17 The Smiths – William, It Was Really Nothing
18 The Cure – The Caterpillar
19 The Bluebells – Will She Always Be Waiting
20 Blancmange – The Day Before You Came

The summer of 1984 started with a school trip to London which was almost immediately followed by 24 days at Irish college. The weather was almost as good as the previous year – especially August – and many of the songs included here date from that sticky spell. While it was the summer of Frankie, I have decided to let others share the limelight – so you get the wistfulness of The Bluebells coupled with Lloyd Cole’s razor sharp debut along with Blancmange’s blinding ABBA cover to finish. The family holiday was spent travelling around the Ring of Kerry. We dropped into a hotel to see Top Of The Pops. Two Tribes #1. Like 1983, there were also numerous day trips to the beaches on the Hook peninsula.

Gary Moore’s Friday On My Mind immediately takes me back to my Inter Cert; panic and stress followed by sheer relief when it was finally over. The Cult’s Electric was purchased in Waterford along with Slayer’s Reign In Blood. We also saw Platoon in the cinema that day – and cycled there and back. The Smiths’ break up was unusual in the sense that it was announced two months before their new album, rather than afterwards. No internet meant that I didn’t hear about it until that week’s NME; I was on holidays in Lahinch so wasn’t doing my usual radio listening. New Order’s Substance was purchased in Galway. Day trip.

Licence To Kill was the last film I saw in The Ritz Cinema. I was with my new flame in the double seat. August 1989 – once again, an extremely scorching summer. It closed down the following February; The Delinquents (with Kylie) was the last picture show. While The Cure hung heavy in 1989, the singles came out in April & September so I turn to Dinosaur Jr’s superb cover of Just Like Heaven to provide them with a spiritual inclusion on this playlist. Both The Pogues and London Boys tracks remind me of misspent times in the capitol. ABC’s One Better World is euphoric even now but bombed. There was no more ice cream; the part-time job in the L&N supermarket was key to building my record collection and providing funds for social activities. Who wants to be the disco king?