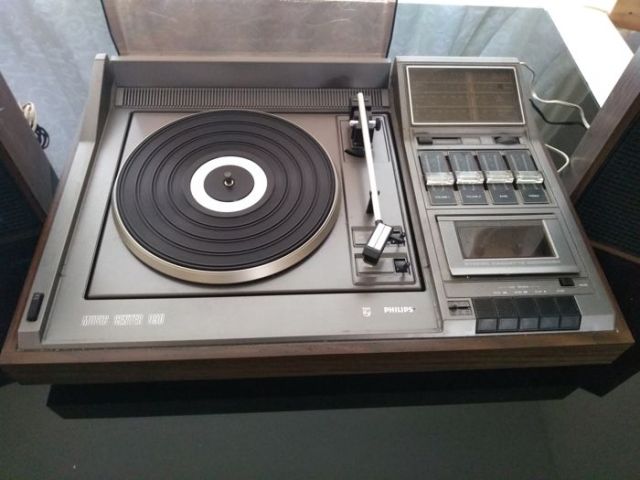 I started buying vinyl in December 1981 and was an early adopter of CDs – I got my first player in Easter 1986. It was part of a Sony 4-in-1 midi system. I ended up buying the Pet Shop Boys’ Please on both formats a week later – the LP cost £8, the CD was £18. Throughout the remainder of the 1980s, I primarily bought new albums on vinyl, loads of 7″ and 12″s and CDs only occasionally. However for pop and dance compilations, I always bought the CD version – I couldn’t see the attraction of 33+ minutes worth of music crammed onto one side of a LP. I started buying CD singles in early 1988 but only selected titles as they were very expensive.

During 1990 I began to notice a change. Quantities of new LPs started to decrease. My local shop would only get in a handful of vinyl copies for major label releases while a couple of boxes of cassettes would arrive for the same titles. One example is Something Happens! – Stuck Together With God’s Glue album which was released in May 1990. KG Discs, Waterford sold 150 copies in the first week – 100 on cassette, 45 on CD and 5 on LP. As Donny Keane once said – “1990 was vinyl’s last Christmas while cassette was king.”

The pattern was the same in the large stores – back then we had Virgin, HMV and Our Price in Dublin with Tower opening in 1993 and is still there. All the big stores still carried every title on vinyl but cut back considerably on the number of copies. Achtung Baby went on sale at midnight on Sunday 17 November 1991 in HMV Grafton Street. There was a reasonably healthy vinyl display and likewise for other big titles like Out of Time and Nevermind.
The rural shops really started to phase out LPs during 1991. In my hometown of New Ross, LP sales fell to almost zero during that summer. By the end of that year the owner decided to sell all LPs at £1.99 in an effort to get rid of them for once and for all. Titles like the newly-released Use Your Illusion I and II, The Doors’ Absolutely Live, Led Zeppelin Remasters (a triple) were all grabbed for this bargain price. He continued to sell 7″ singles until 1993 – mostly to local DJs. Plus the occasional indie 12″. After 1993 the only vinyl in my local shop was got in by special order – and you had to pay a deposit.

Indie and alternative LPs continued to sell reasonably well right through the 1990s. Indie 12″s had their glory days from about 1988 to 1993. Places like Freebird, Comet and Borderline thrived although CDs were becoming dominant. The dance scene was very healthy with about a dozen shops the city centre specialising in 12″ singles from the 1994 to 1999 period. After that they started to drop off. HMV continued to sell 12″s – mostly house. 1993 was the nadir for new vinyl, particular major label releases. By 1996 Virgin had a fairly small LP section – they normally got 1 or 2 copies in of each new release so you had to be there on time. The Fall’s Light User Syndrome and Levitate were both purchased there (the only copies I saw in Dublin for both). Other one-copy-only albums I snapped up were The Wedding Present’s Watusi and another Fall LP The Infotainment Scan (both from Borderline). 7″ singles (particularly indie) remained reasonably popular back then. All throughout the 1990s, my preference was to buy new albums on vinyl but as I had a full time job (and more money for music), I started buying more CDs – sometimes doubling up, but most of the time getting back catalogue remasters and compilations. Labels like Rhino were bringing out amazing series like Super Hits Of The ’70s, Just Can’t Get Enough New Wave ’80s etc which were ideal for the CD format. I also got into box sets around then and these were perfect on CD – stuff like Nuggets, Acid Drops, Stax Singles etc – totally impractical on vinyl – and by and large, people accepted that CD was the optimum delivery method for titles like these.

Things started to take off in the 2000s – I kept buying new LPs but gradually noticed the increasing prices as most new albums were doubles. The price of CDs came down and by 2012, I had shifted to CD for most new releases – but still buying plenty of second hand records where there was still good value to be had. Back to the Pet Shop Boys – I bought the Super album in April 2016 (30 years after Please) and the LP cost €26 with the CD only €14. That kind of pricing pretty much sums up the vinyl revival. It’s great to see the format doing well but I think some people are losing perspective – dropping €30 for new reissues of common albums that mostly can be found easily used for much less. There’s also a quality issue – some vinyl reissues are shocking (Scott Walker’s 4 Men With Beards label) – while others are priced sky high. I’m also noticing an intolerance towards CDs – it primarily seems to be coming from Born Again Vinyl Junkies, many of whom did not support the format in the lean years. If you look at any news bulletins about upcoming multi-disc box sets, invariably someone will throw a tantrum if there’s no vinyl release – despite the fact that it would need a price point of €175 to make money for the label. Surely the music is the important thing, not the format.