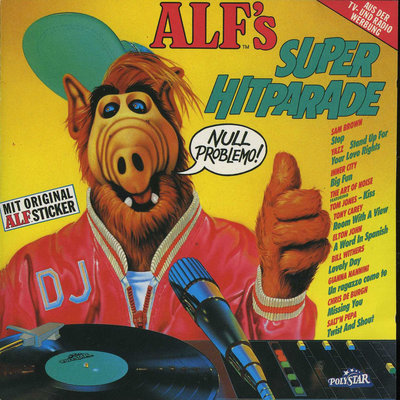 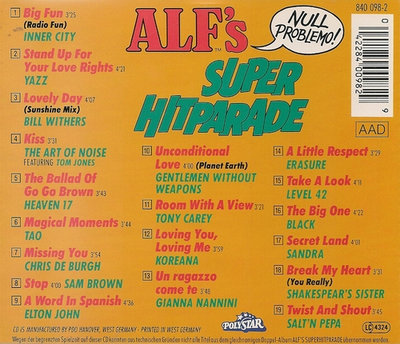 Review
Animal-led compilation series were common in West Germany during the late 1980s. You had a chimpanzee [Ronny Pop’s Show], a rat [Larry Präsentiert] and an extraterrestrial [ALF].

ALF’s Super Hit Parade’s first tie-in was a double LP and single CD released in late 1988. Like many albums of its type, you get a mix of familiar hits and lesser-known numbers. The first four tracks set the scene for a poptastic opening – the house rhythms of Inner City and Yazz along with a fresh-for-88 remix for Bill Withers and Tom Jones + Art of Noise’s unique reading of Prince’s Kiss.

Things take a strange turn with track 5. It’s Heaven 17 and their guitar and real bass Western-influenced The Ballad Of Go Go Brown. It’s a long way from Let Me Go and the record-buying public of the UK showed very little faith as it stalled at #91. Two slick torch songs from Chris De Burgh [Missing You] and Sam Brown [Stop] get the wagon running again before Reg Strikes Back. A Word In Spanish was released in Canada and West Germany only. It’s an arresting piece of melancholy that deserved a much wider audience.

The mid-section of Alf’s Super Hit Parade is expertly sequenced as moody evening music. Tony Carey’s Room With A View and both Gentlemen Without Weapons’ Unconditional Love and Koreana’s Loving You, Loving Me play to their strengths as downbeat and introspective tunes. Pick of the pops however is Gianna Nannini’s magnificent Un Ragazzo Come Te with it’s rasping earthy vocal and nifty drumming.

Highlights from the home stretch include Level 42’s underrated Take A Look – a haunting slow-burner from their Staring At The Sun album. Equally less-feted is Black’s The Big One with its rewarding melodies. Sandra’s Secret Land is an euphoric burst of hi-NRG while Siobhan Fahey’s new project – Shakespears Sister – gives us a succinct snapshot of perfect pop with the accomplished debut 45 Break My Heart (You Really).

Lest we forget
Shakespears Sister – Break My Heart (You Really)

This entry was posted in ALF. Bookmark the permalink.