Posted on November 1, 2014 by nlgbbbblth 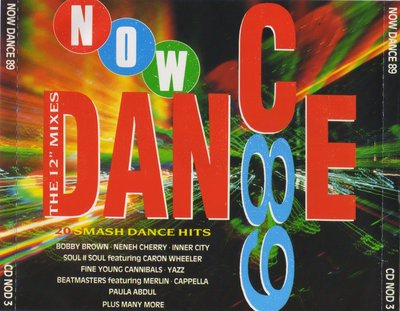 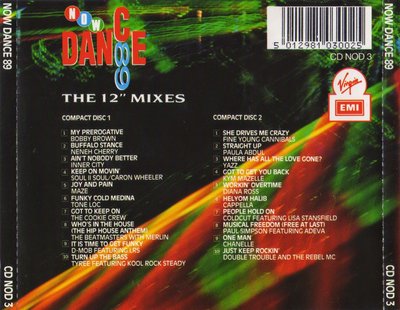 Review
“1989 was a hell of a year: when acid house parties became raves, moving from clubs and warehouses to outdoor events and the M25 at night was full of clubbers trying to find the location of the next big rave”. (Dave Pearce – The Dance Years: 1989)

After a three year absence, Now Dance returned to the shelves in July 1989. The initial house bursts present in Now Dance ’86 had since exploded and were now in their second orbit. Another change was the popularity of CDs. The two previous instalments had just been released on vinyl and cassette so squeezing five 12″ singles onto one side of an LP led to a compromise in fidelity. All had now changed; you could now buy Now Dance in a chunky fatbox with perfect sound forever.

This new edition starts with Bobby Brown. Don’t Be Cruel was a funk phenomenon, released in June 1988 with sales of almost five million racked up by the following summer. My Prerogative in long form is immaculate new jack swing. Neneh Cherry’s Buffalo Stance is next, the full length mix welcoming the hi-hat and tambourine. Big Fun and Good Life were followed by Ain’t Nobody Better; 1989 was another successful year for Kevin Saunderson and Inner City. The Groove Corporation remix builds on the house foundations; extending it for maximum body-popping impact.

Soul II Soul were also an ’89 arrival; Keep On Movin’ (Club Mix) is astounding, immortalised by the voice of Caron Wheeler. Donna Allen’s cover of the Frankie Beverley-penned Joy And Pain went top 10 in the hot summer of 1989. The soulful original version was reissued in May just one week ahead of Donna but stalled at #57. Meanwhile Tone Loc’s Funky Cold Medina tells a cautionary story about love potions while Cookie Crew is strictly bad ass hip house and rap fusion with a liberal serving of Edwin Starr’s 25 Miles.

The Beatmasters previously had hits by teaming up with Cookie Crew [Rok Da House] and PP Arnold [Burn It Up]. Teenage rapper Merlin guested on Bomb The Bass’ Megablast. When they met it was murder. On the dancefloor as Who’s In The House (The Hip Hop Anthem) became a go-to track for all club DJs that April. Get your whistles out for D-Mob. It’s Time To Get Funky is proper old skool house with perfect pitch and a cool stutter rap from LRS. Best until last: Tyree’s got a brand new house. Turn Up The Bass is included here in its Super Duper Mix guise. Parts 1 and 2. Ten minutes of madness with Kool Rock Steady on the mic and Peter Black on keyboards. Turn up the what?

Disc 2 sees a reversion to more traditional pop. The raw and the cooked. The extended cut of She Drives Me Crazy includes a nifty use of a tremelo halfway through. Hats off to David Z. Paula Abdul’s Forever Your Girl was also released in June 1988 but was a slow burner, only gaining momentum during the spring of ’89 when Straight Up was released. The 12″ mix is a slammer. Yazz makes it four hits in nine months with the tidy US remix of Where Has All The Love Gone while Kym Mazelle’s beaty Got To Get You Back gets the groovy piano treatment. Dancin’ deep and workin’ overtime with Diana Ross. Nile Rodgers at the helm. Funky remix worked by Timmy Regisford.

We’re into the last quarter and Cappella work it to the bone with the wicked hi-NRG house hybrid Helyom Halib. There’s one edit here [presumably due to vinyl space limitations] and it’s People Hold On. The full length disco mix loses two minutes which is a pity. Hacienda anthem Musical Freedom paired Paul Simpson with Adeva and introduced Carmen Marie. Wonderful vocal, hands in the air, moving on up, keep on dancing. Epic. Free at last. And now for a hot new American import – Chanelle’s One Man. Philly meets house in a hypnotic groove. Remix and additional production by David Morales with Frankie Knuckles. Finally we end on a sk’ouse tip. Ska meets house with Double Trouble and The Rebel MC on Just Keep Rockin’.

“Don’t keep on crying when there’s nothing left to gain”.

Lest we forget
Chanelle – One Man (One Mix)

This entry was posted in Now Dance. Bookmark the permalink.