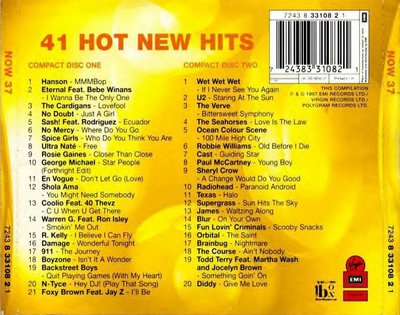 Now That’s What I Call Music 37 was released on Bastille Day 1997. After three successive CD1, song 1 slots for the Spice Girls, the opening ceremony was awarded to Hanson and their summery MMMBop. Absolutely nothing to do with Crash Test Dummies; instead a harmonious slice of harmless fluff. Then it’s the turn of Eternal to team up with Bebe Winans on I Wanna Be The Only One before The Cardigans’s finely-tuned Lovefool. The latter was reborn after its use in Romeo and Juliet. Also reissued was No Doubt’s sparky meets dreamy Just A Girl. Now Ashley drops a trance banger into the mix; the new number from Sash! Ecuador which also features Rodriguez, presumably a footballer.

No Mercy toss in some Latino sounds with the flower power vibe of Peter Sarstedt on Where Do You Go, already picked up on New Hits 1997 along with Backstreet Boys’ Quit Playing Games (With My Heart). Meanwhile the Spice Girls’ Who Do You Think You Are had its first airing on Smash Hits Summer ’97 – along with George Michael’s sleek Star People, Damage’s Wonderful Tonight and R Kelly’s Space Jam ballad I Believe I Can Fly. Equally suitable for the dancefloor are Ultra Nate’s crossover Free and Rosie Gaines’ funky Closer Than Close. The divas of En Vogue are in fine form on Don’t Let Go (Love).

Mood: relaxed. Shola Ama’s wonderful cover of You Might Need Somebody. Jack it up! Coolio is back; this time with 40 Thevz on C U When U Get There and based on the melody of Johann Pachelbel’s Canon in D Major. As featured in the film Nothing To Lose. Elsewhere we smoke out Warren G and Ron Isley while 911 bring us on The Journey. Continuing on the smooth path are Boyzone with their eighth successive smash, Isn’t It A Wonder. Just before we break for half-time, the beats get tougher on N-Tyce’s cover of Zhane’s Hey DJ. And teenage hip hop sensation Foxy Brown drops another bomb – I’ll Be – featuring Jay Z. Future legend: as nasty as they wanna be etc.

“Then you discover
What you thought was freedom is just greed”

CD2 is a different beast. After the gentle false start of Wet Wet Wet and If I Never See You Again, it’s mostly straight ahead indie, Britpop and rock. U2’s wonderful Staring At The Sun, remixed from Pop. The Verve’s wistful Bittersweet Symphony with its sympathetic massive strings. Urban Hymns spent a lot of time of my turntable. John Squire’s mob, The Seahorses get a top 3 hit with their debut single Love Is The Law while Ocean Colour Scene’s 100 Mile High City is the sound on the band on top form. Robbie Williams’ Old Before I Die is real anthemic stuff; a poptastic rush. Cast’s second wave; the underrated guitar gem Guiding Star. In good company, next is Macca’s bouncy Young Boy.

Radiohead’s OK Computer: one of the greatest albums of all time. The meandering and cryptic Paranoid Android was the lead single; four distinctive sections and no edits offered. It’s preceded by Sheryl Crow’s A Change Would Do You Good, an effective Beck pastiche. And followed by Texas’ continued renaissance, the driving Halo. Supergrass launch another mod rocket, the sharp shock of Sun Hits The Sky. Next: James – Waltzing Along, “all roads lead to death row”. And Blur successful reinvention continues as On Your Own makes it three hits in ’97, a melting pot of styles and a template for Gorillaz.

I can’t warm to Scooby Snacks and its censored Pulp Fiction samples. Possibly the most conservative music I’ve ever heard. The Orbital’s version of The Saint theme is much more like it; creepy, innovative and loaded with strings. Brainbug’s Nightmare is in good company. Move over for The Course’s spanking version of Ready Or Not. Next comes the cavalry: Todd Terry hitchin’ a ride with disco divas Martha Wash and Jocelyn Brown on the haunting Something Goin’ On. Goodbye: Diddy’s storming club classic Give Me Love.

Favourite tracks
Blur – On Your Own

Lest we forget
Cast – Guiding Star

Missing tracks and other thoughts
A very decent entry in the series. CD1 is consistent and smooth but the key tunes come on disc 2. Here’s a quartet of busy numbers that also were flavour of the season:

Suede – Lazy. Coming Up milked to the max.
Daft Punk – Around The World. Love where they say “around the world”.
Pet Shop Boys – Somewhere. One for the trouser enthusiasts.
Massive Attack – Rising Son. Clear vinyl 12″ released just before release date. Hot tip.

Promotional poster courtesy of the Now That’s What I Call Music Collectors Group UK. Note the reference to a vinyl edition which doesn’t exist. 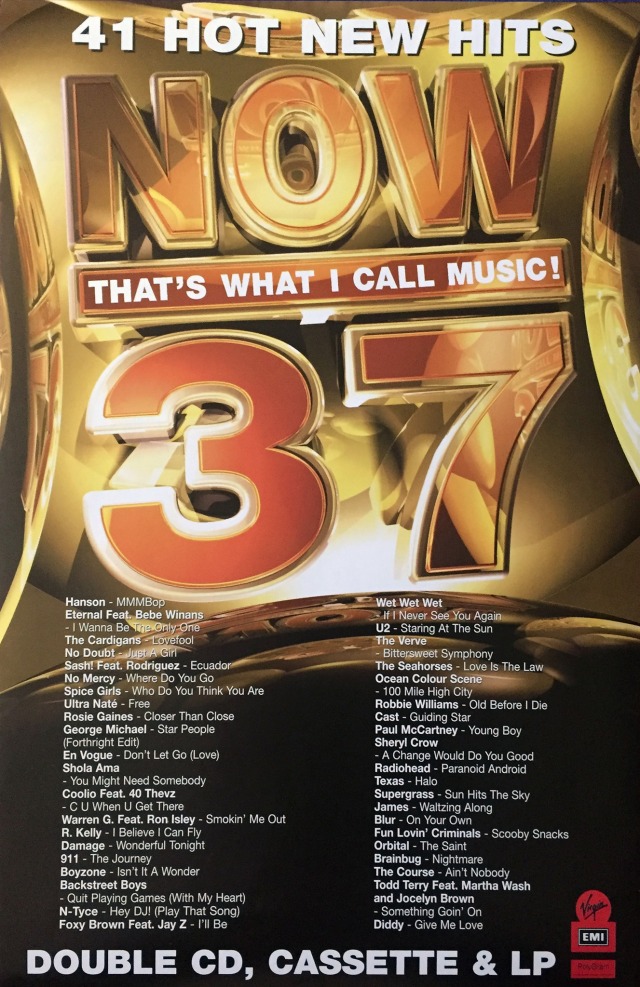