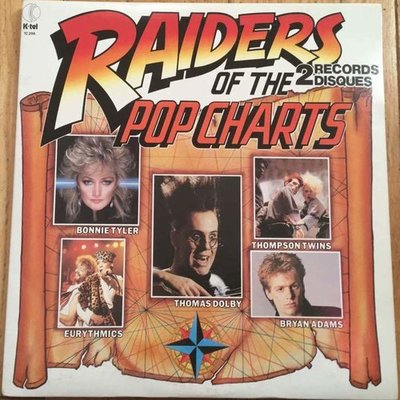 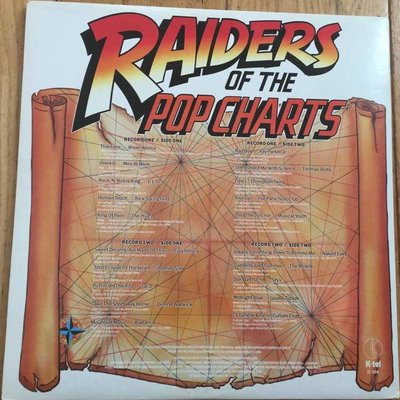 Review
Once more: so to Canada, early 1984. K-Tel release another international version of the original Ronco classic Raiders Of The Pop Charts. 2 records or disques. Cover stars are Bonnie Tyler, Eurythmics, Thomas Dolby, Thompson Twins and Bryan Adams. Inside – it’s a lavish gatefold – you can gaze at Rick Springfield, Men At Work, The Police, Ray Parker Jnr, Taco and Styx. Images on an olde world scroll. True international feel.

Unlike the Australian Raiders Of The Pop Charts which had a groove-busting 34 songs, the Canadian version has a mere 20 spread across two LPs – so the sound quality is ace. Eight of these have already been covered on the following reviews:
Chart Attack: Musical Youth – Pass The Dutchie.
Chart Wars: Thomas Dolby – She Blinded Me With Science.
Street Scene: Thompson Twins – Lies.
Chart Encounters Of The Hit Kind: Louise Tucker – Midnight Blue.
Chart Stars: Eurythmics – Sweet Dreams (Are Made Of This).
Hits On Fire: Men At Work – Overkill.
The Hit Squad Chart-tracking: Culture Club – I’ll Tumble 4 Ya.
Chart Hits ’83: Bonnie Tyler – Total Eclipse Of The Heart *.
* Here we get the full length album version which runs for 6:48.

Cuts Like A Knife was Bryan Adams’ breakthrough album. This Time – which opens up this compilation – is a melodic rock number with a wistful poppy edge. The video was shot near Edwards Air Force base, California. Less immediate is ELO’s Rock’n’Roll Is King, a competent tune with a samey vibe. Ahead of his time: Rick Springfield’s unerring Human Touch which talks about everyone being addicted to their electronic gadgets and not having the skills to interact on a personal level. It’s like a prophecy song for today! ﻿And completing this strong first quarter are The Police with the searing King Of Pain. Post-separation: “There’s a little black spot on the sun today, that’s my soul up there.”

Ray Parker Jnr spins a funky tale on the disco bliss of Bad Boy. Break out the leather baby! We go local for the Parachute Club’s uplifting Rise Up, produced by Daniel Lanois. An upbeat call for peace, celebration, and “freedom to love who we please” and remains the band’s most famous song. It has been adopted as an activist anthem for causes as diverse as gay rights, feminism, anti-racism and the New Democratic Party. First performed at Toronto Pride in July 1983; it’s the longer album version that’s here, not the single edit. On a different tip: Taco’s synth cover of Irving Berlin’s Puttin’ On The Ritz. A slinky tune with the original video containing people in blackface going down like a cup of cold sick.

Dionne Warwick’s Take The Short Way Home, another hit from Heartbreaker with a nice smattering of Bee Gees elements. Here’s an oddity: Alabama’s Mountain Music – southern rock meets country. When new wave meets Bacharach and David: Naked Eyes’ dazzling cover of Always Something There To Remind Me. Massive in the US, flopped into their native UK. The spell continues with The Motels; Martha Davis said about Suddenly Last Summer – “You how you know summer is ending when you hear the ice cream truck go by for the last time and you know he won’t be back for a while”. Gorgeous. That just leaves Styx and their classic soft rock sound of Don’t Let It End. And that’s your lot.

Naked Eyes – Always Something There To Remind Me

The Police – King Of Pain

This entry was posted in Pop non-UK. Bookmark the permalink.