Posted on September 1, 2018 by nlgbbbblth 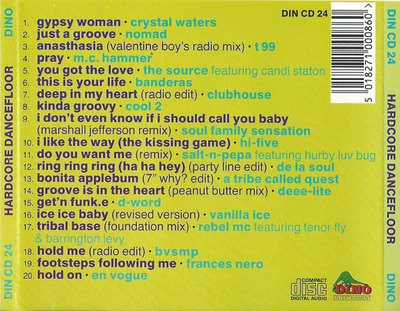 Review
Hardcore Dancefloor, the second volume in the series, was released at the end of June 1991. After the topical and everlasting Gypsy Woman, it’s a flashback to the last days of The Bridge Hotel with Nomad’s rather underwhelming Just A Groove. All hail T99 and their bombastic Euro dance of Anasthasia; another memory slap from Top Of The Pops May 1991. Professional 2 cramming to the Belgian bangers. There’s a triple play from the Now That’s What I Call Music 19 era before Cool 2 get funky with the Kool & The Gang-inspired Kinda Groovy. And now for a UK soul classic – Soul Family Sensations’s I Don’t Even Know If I Should Call You Baby as remixed by the legendary Marshall Jefferson.

On Jive, the slickest of R&B cuts, Hi-Five’s super smooth I Like The Way (The Kissing Game). Produced by Teddy Riley and taken from the Waco boys’ 1990 debut LP, the video has an exceptionally large amount of dark colours and shadows in contrast to the somewhat light-hearted tune that plays. Singer Tony Thompson died in 2007; a tragic end. Despite being advertised as The Peanut Butter Mix (3:31), the version of Groove Is In The Heart is actually the one as featured on the World Clique LP (3:51). The unfamiliar D-Word and the Chic-sampling Get’n Funk.e is rather ordinary and overshadowed by Ice Ice Baby (Revised Version) – the latter sounding like the album version. Elsewhere there’s BVSMP’s smooth Hold Me, that sees them try hard but fail to capture the spirit of ’88.

“Step back and give ’em some room! Quartet of future divas fresh from the Foster and McElroy stable deliver intricate, tight harmonies with a dash of sass on this groove-laden debut.” (Billboard)
Hardcore Dancefloor concludes with one of the most significant tracks of the era. It can only be En Vogue – Hold On which kicks off with an untouchable acappella snippet from Who’s Lovin’ You (originally recorded by The Miracles) before sliding into a killer groove. Some words:
“Summer 1990. You couldn’t escape this track, but damn was this shit bumping.﻿” (B-Jo)

This entry was posted in Hardcore. Bookmark the permalink.