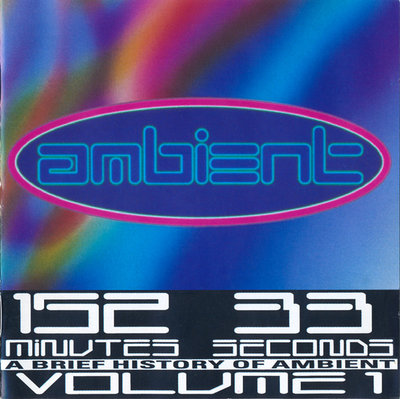 Let’s get the technical stuff out of the way first. There is a good and a bad version of this compilation. On the improperly mastered edition, the track index points for disc 2 are the same as on disc 1. That is, disc 2 reads as having 14 tracks instead of 15, and none of the track start points are correct after track 1. Disc 1 is mastered correctly. But it will drive you insane especially if shuffling. Thankfully my copy is the unblemished version.

The first track is by Harold Budd. Captain Marigold remembers “I don’t know what your dreams are like but you’ve certainly created a soundtrack for mine.” It’s taken from his 1986 LP Lovely Thunder and dedicated to Simon Raymonde, whom he collaborated with during the same year on The Moon & The Melodies. Two more Simons – Hopkins and Hepworth – are involved with A Brief History, but not Reynolds. The sleeve notes work backwards from 1993 to 1960; Scenes From The Brief History Of Ambient, complete with obligatory Orb references. Next, back five years, an edited Thru Metamorphic Rock by Tangerine Dream – impressive sequencer alert as the theme tune to RTE’s early ’80s Replay series splits like a jigsaw puzzle. That was by Jarre, this recalls wordless sporting highlights, sprints for athletic gold watched through a sitting room window in 1983, all picture no sound. The momentum builds nicely from around the 5:00 mark.

A drift back to 1975 is like a deep burrowed recess into ancient childhood memories. Pink sticks of rock, getting lost at Dunnes Stores in Salthill, old ladies with scarves and the Siege of Monasterevin. Tiede Herrema only died in April; the track here is Evening Star, the title track from Robert Fripp and Brian Eno’s marvelous creation – according to YouTube, using a small Fender Champ “silverface” and (likely) an AKS EMS as multi-effector and two Revox tape recorders to create the loops. Almost spectral. Next one of the Future Sound Of London’s most well-known aliases, Amorphous Androgynous which was used for their 1993 album Tales Of Ephidrina. Mountain Goat is nothing to do with John Darnielle, instead it’s a gentle & haunting masterpiece that evokes memories of the Chill Out sheep and snatches of New Order’s Elegia. We remain soothed by Nusrat Fateh Ali Khan’s Sea Of Vapours but terror strikes on Hawkwind’s menacing Forge Of Vulcan.

Killing Joke’s Change 12″ found its way into my collection in late 1992; on the flip was the extraordinary Requiem (A Floating Leaf Always Reaches The Sea Dub Mix). 1980 reborn, given life by Andrew Weatherall’s Essential Mix. 10 minutes of madness. In the wake, the remarkable Ending (An Ascent), lifted from Apollo: Atmospheres And Soundtracks, the sublime 1983 LP from Brian Eno ably assisted by Daniel Lanois and Roger Eno. “This is probably what we’ll hear when we leave this world.” (Doros Petsas) It is truly an ambient masterpiece, one that works in a variety of situations; hope, sadness, healing. Shuga Foo says “This will play after armaggedon when earth becomes a paradise.” It’s very hard to follow that. Richard Horowitz’s Marnia’s Tent is pleasantly brief before the grim Rapido De Noir AKA The Last Train To Eternity, brought to us by Irmin Schmidt & Bruno Spoerri.

Ashra were Ash Ra Tempel and Kazoo is taken from 1980’s Belle Alliance. At the time, this was totally new to me and remains one of the compilation’s best gateways. A beautiful, unfussy recording. Equally gorgeous yet somewhat more minimal is Their Memories from The Pearl, a 1984 collaboration between Harold Budd and Brian Eno. “…and the role of Your Flitting Attention-Seeking Ego is played by A Windows Mouse Pointer.” – bringing us back up to date with an underrated sample-heavy number from The Grid. The stunning first half comes to a close with Tangerine Dream’s Christopher Franke and his mournful Electric Becomes Electric. Time for oranges and lemons now, some citrus juice for CD2.

Once again we kick off with an epic. Cut down from its original 17:39 length, Tangerine Dream’s Phaedra (1973) is still remarkable. A cosmic collision from the future. We zip left to 1980 for track 2, another – in the words of Half Man Half Biscuit – Eno collaboration. Jon Hassell in tow, Delta Rain Dream. Twisted native folk from another dimension, an apt description that could also apply to William Orbit’s Monkey King. And then for some brevity: Gong’s Castle In The Clouds neatly dovetails into Hawkwind’s throwaway Life Form. Next the storm, Laraaji Nanananda or Edward Larry Gordon – professionally known as Laraaji drops The Dance #2, a hypnotic & repetitive drone from his Brian Eno-produced LP, the third edition of the latter’s Ambient series, which began in 1978 with Music for Airports, and was followed by The Plateaux of Mirror (1980). The series ended with On Land (1982). A suggestion for a follow-up – Ambient 5: Music For 80s Discount Super Stores (courtesy of Conor McMahon in a reference to Moore Street’s Apollo 1 shop).

When singer Sheila Chandra was just 16, she sang on Monsoon’s Ever So Lonely (1982). Her wonderful vocals hark back to George Harrison’s Indian excursions of some 15 years earlier. She also appeared in Grange Hill as Sudamani Patel where Trisha Yates taught her how to say “flippin’ ‘eck.” The brooding Sacred Stores appears here, taken from the 1992 LP Weaving My Ancestors Voices. Anyone remember BBC Radio’s Blue Jam? The music was very spectacular and remembered on my series of mixes called The Blue Jam Tapes. Michael Brook’s Earth Floor features, a deep inward burner. And then Faust, ostensibly Läuft…Heisst Das Es Läuft Oder Es Kommt Bald…Läuft but is it really, given the screw-ups with Faust IV’s CD tracklist and numbering. Any reader who could clarify things?

Home stretch: it’s a kind of magic with Jon Hassell’s Gift Of Fire quickly followed by Material’s spooky The End Of Words, the eerie closing track on 1989’s Seven Souls. I once played the album on night shift at Zadkine, Stokestown. The truck driver and his mate looked disturbed. Meanwhile Edgar Froese’s deep impact banger Panorphelia brings us right back to Berlin, 1974. The open road and lights of the cars illuminating the way; the stillness of the night contrasting with the epic soundtrack. From there, the briefest of piano atmospherics in Roger Eno’s sublime Voices, one of 1985’s most underrated pieces. The soft sounds continue on Holger Czukay’s Träum Mal Weider – Fontsman says “I imagine this as the music we hear when our time on this earth is over and we ascend to the heavens.” Experience has taught us that David Sylvian is a great way to end a compilation – and here is a prime example as the sublime Home brings us a perfectly realised finale. You may want more – take a listen to Art / Parties. Many possibilities.

Material – The End Of Words

This entry was posted in Ambient. Bookmark the permalink.