A Brief History Of Ambient Volume 3: The Music Of Changes (Virgin, 1994) 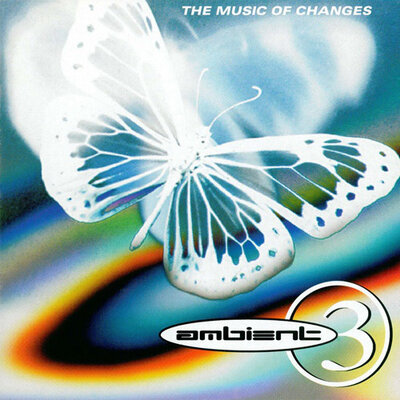 Review
“At the count of three
I want everybody in the place to be
To make some noise if ya down with me
One, two, three” (DJ Kool – Let Me Clear My Throat)

Volume 3 of Virgin’s Ambient series has no sleeve notes aside from song credits. It starts with Shu-de, a troupe of five singers from Tuva who sing and interpret shamanic songs. Sygyt is a snippet of track off Voices From The Distant Steppe, a brief taster. And then into the sea of tranquility with Bruno Spoerri & Irmin Schmidt’s When The Waters Came To Life. An endless stream of liquidized Toblerones; like in Wonka time. This leads into The Future Sound Of London’s thoughtful reconstruction of Darshana, David Sylvian & Robert Fripp’s superb creation. The version here is slower than on the 12″. Which is definitive? And there’s more where that came from with Rain Tree Crow’s moody Red Earth (As Summertime Ends), perfect for autumn evenings by the Mile Tunnel. That Japan reunion album featured on my Walkman back then, soundtracking those moonlight nights by the Red Bridge. The cock crows three times on Epiphany, a short taster from Approaching Silence while on the second disc there’s an eight minute excerpt from the wonderful Mutability, Sylvian and Holger Czukay’s hypnotic improv delight. If you need more of the same, then seek out my double whammy Mixcloud experience Art / Parties

Strange Cargo III is a fascinating album. William Orbit created it in such a way that the individual tracks sound better than the LP as a whole. Gringatcho Demento is overloaded with special effects; like a score from a futuristic David Cronenberg film. Elsewhere revel in the sparse delivery of Ryuichi Sakamoto’s The Last Emperor – Theme Variation 1 before Robert Fripp’s epic isolation drill 1988, which is actually an edit of 1989 from the album Let The Power Fall. Equally mysterious in its identity is A Study Of Six Guitars, credited to Amorphous Androgynous and which would later appear on The Future Sound Of London’s ISDN. It’s followed by Trisan on Real World Records – Pól Brennan (Clannad) with Joji Hirota & Guo Yue. May Yo I is a windswept piece, stark pipes and a languid vocal from the edge of the precipice. The extended coda works really well too, shades of Plainsong.

CD2 starts off with a track from Hybrid, Michael Brook’s sublime 1985 LP featuring Daniel Lanois and Brian Eno. The greatest of years; Distant Village is a lush wordless travelogue with babbling beats. Next comes Holger Czukay, Jah Wobble & Jaki Liebezeit and Mystery R.P.S. (No. 8), which originally featured on 1982’s Full Circle. Wait for it to build and build, like a form of shag tobacco – over 8 minutes of goodness. + The heavy dub sound of Prince Far I and Throw Away The Gun which starkly contrasts with the austere ambience of Budd & Eno’s Wind In Lonely Fences. The Plateaux Of Mirror still has many secrets to reveal. Moving to 1984 next: King Crimson’s Nuages (That Which Passes, Passes Like Clouds) from Three Of A Perfect Pair. Soundscapes before soundscapes. ++ Nusrat Fateh Ali Khan’s Mustt Mustt (Massive Attack Remix) with its nifty drums & evocative chants.

There’s an interlude of c.90 seconds from Stephan Micus & his Concert For Gender, Shakuhachi And Zither (Excerpt) before a beguiling 1979 number called Healthy Colours III by Robert Fripp and Brian Eno. This did not surface until 1994’s Essential Fripp & Eno and reminds me of an outtake from Bush Of Ghosts. We’re then treated to an longform epic by the Future Sound Of London; Cascade Parts 2 & 3. A spectacular journey before going back to ’84 for Robert Quine & Fred Maher’s circular Summer Storm which is turn succeeded by the minimal Rising Thermal 14° 16′ N; 32° 28′ E by Eno & Jon Hassell. Lastly, it’s the Life of Brian and 2/2, the genius creation off Music For Airports, the 9:30 extended version that first appeared on the CD and Working Backwards box set. Heroic.

Lest we forget
Trisan – May Yo I

This entry was posted in Ambient. Bookmark the permalink.