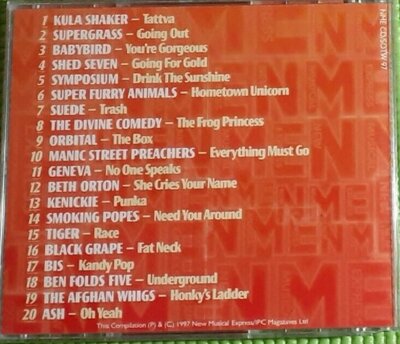 Review
“And then one more…A bit of a classic perhaps. A single that bends pop music, or rock’n’roll, or techno, or the canon of avant-garde fridge noises, and twists it into an inspiring new shape. An instantly memorable tune. A glorious fucking racket. The clarion call of a new era. The valedictory shout of an old one. Something, when all’s said and done, that we genuinely, gushingly, unapologetically like. That’s the Single Of The Week. Here are 20 of them…”

This final compilation of NME 45s ends with Ash’s lazy summer anthem Oh Yeah and is started by Kula Shaker’s underrated fuzz ‘n’ pedals ’60s throwback Tattva. Moving on…Supergrass’ Going Out was the first fruit from In It For The Money and maintains the psych undertones of the debut era while providing a fresh lick of paint for the mid-90s. A band that seemed to have instant growth, releasing one of the most accomplished first albums ever. You’re Gorgeous is followed by Shed Seven’s wistful Going For Gold which in turns bleeds into Symposium’s cracking driver Drink The Sunshine. 1-2-3-4-5-6-7-8.

1996 was also soundtracked by Fuzzy Logic, the Super Furry Animals’ perfectly realised debut album. After two Welsh language 7″ EPs for Ankst, Hometown Unicorn was single #3 and the first of theirs on Creation. A psychedelic masterpiece that’s still impossibly brilliant. Tim Wheeler said “It’s about this French teenager called Franck Fontaine who disappeared in 1979, then turned up a week later, claiming he had been abducted by aliens.” Equally fantastic is the short second CD of B-sides from their memorable mid-2000s US reissue campaign. Organ yn Dy Geg / Crys Ti / Lazy Life (of No Fixed Identity) / Death by Melody / Waiting to Happen. Suede’s Trash leads into The Divine Comedy’s hilarious tale The Frog Princess (are you out there Derek Gough?) before time becomes loop on Orbital’s The Box. A wonderful video too with Tilda Swinton. MTV memories.

Everything Must Go, the title track from 1996’s most cathartic LP is perfectly sequenced here. Next is Geneva’s epic debut No One Speaks, one of the underrated Britpop gems. Trust Celt67 on Beth Orton’s She Cries Your Name – “Makes me think of a near deserted highway winding its way through the Mojave desert in blistering heat to a lonely diner in the middle of nowhere….. hard to compute when you find the artist comes from rainy Britain.” Meanwhile Kenickie’s Punka and Ben Folds Five’s Underground were storied on Shine 6 and the Smoking Popes’ Need You Around still sounds like Moz at 20. Next come Tiger and the ridiculously underrated Race complete with molten riffs while Black Grape’s entertaining Fat Neck was their first of two non-album singles in 1996. Prankster pop.

After peaking with the Gentleman LP in 1993, I didn’t think the Afghan Whigs had much left to give. Honky’s Ladder is saturated with beefy soulful vocals and crunchy guitars. Stepping back two places and it’s time to talk about Bis. I first heard them in 1995 – on a Ché double 7″ singing Icky Poo Air Raid. The Delgados were also there with I’ve Only Just Started To Breathe. Then School Disco on the Disco Nation 7″. Followed by the superb Kandy Pop and a TOTP appearance. Later that year there was Super James on my warped Fierce Panda 7″ and the debut single Transmissions On The Teen C Tip finally became available again. I think I bought four copies of the This Is Fake DIY 7″ in Virgin. On 20 April they played a memorable gig at Charlie’s, Aungier Street with Bikini Kill and Team Dresch. It was a great performance and a lovely sunny day. I bought the Palace Brothers’ Arise, Therefore LP from Borderline on the way home & played it in my Grosvenor Road flat with that wonderful accompaniment of Goodfellas pizza and Smirnoff vodka.

Lest we forget
Geneva – No One Speaks

This entry was posted in NME. Bookmark the permalink.