Posted on November 5, 2014 by nlgbbbblth 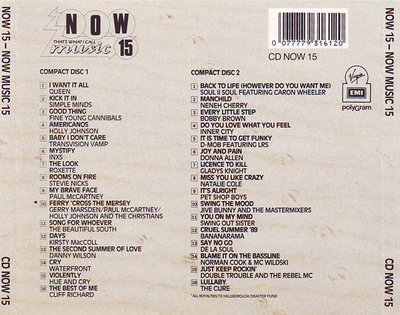 Review
Now That’s What I Call Music 15 was released on Monday 14 August 1989. Five days later I would learn how my future would pan out. Five years of education condensed into one list of grades. A one-off Saturday result special. Time to buy a new shirt – tie-dye or polka dot? That same afternoon saw me snag the last remaining CD copy of the new Now album. For some reason it remains one of the scarcest fatbox-era releases.

The Miracle was Queen’s first LP in three years with I Want It All being the lead single. It was good to see them kickstart another Now album as Freddie’s voice was still in great shape. Shame about the tune though. Simple Minds’ Kick It In is all over the place, a confused jumbled mess. Things improve with Fine Young Cannibals and Holly Johnson. Good Thing broke the US, Americanos evokes nostalgia for the Kennedy era. The Wedding Present would sing “Lost your love of life, too much apple pie” some weeks later. From Atomic City to Velveteen: Baby I Don’t Care dominated the Easter discos with its raunchy riffs. The Kick era continues with Mystify while The Look became Roxette’s first UK hit. Stevie Nicks breaks free with the enigmatic Rooms On Fire and before we know it, we’re a quarter of the way there. Solid but far from spectacular.

1989 was the year of Macca’s Flowers In The Dirt. A most unremarkable record that’s saved by the CD-only bonus track Où Est Le Soleil? My Brave Place is a slouch and is followed by another Liverpool connection: Ferry Cross The Mersey which is credited to Gerry Marsden, Paul McCartney, Holly Johnson and The Christians. All royalties to the Hillsborough Disaster Fund. I watched the horrific events of 15 April unfold on RTE. Some Irish people old enough to know better still buy The Sun. Inexplicable.

The Housemartins broke up in 1988. Two of their ex-members are on Now 15. Paul Heaton’s new band The Beautiful South stormed to #2 in July with the caustic Song For Whoever. A Microdisney for the 1990s. It’s followed by Kirsty MacColl’s bittersweet version of The Kinks’ Days.
“I wish today could be tomorrow”.
Scotland’s call: Danny Wilson’s forgotten hit The Second Summer Of Love is a pleasant interlude with a bitchy sentiment against the acid house revolution. Waterfront had no connection with Simple Minds but Cry is a sophisti-pop sleeper. Also cut from the same cloth were Glasgow’s Hue and Cry with their hard-hitting Violently. Sax and violence. Elsewhere Cliff Richard made it a century of singles with The Best Of Me. It wasn’t.

Disc 2 is a different beast. Three parts dance, one part pop etc. A vital 1-2 concoction to start with. Back to the here and now. Soul II Soul made the summer with Back To Life. A #1 hit that spanned four weeks between the end of my exams and The Cure in the RDS. More about that later. The groove continues with Neneh Cherry’s stringtastic Manchild. A beach with a clothes line and a baby. Every Little Step continues Bobby Brown’s rollercoaster; it’s effective rather than inspiring which is just like Inner City’s rather perfunctory Do You Love What You Feel. Meanwhile it’s time for whistles and Vicks with D-Mob; It’s Time To Get Funky is monster house with a great rap from LRS.

Donna Allen’s soulful vocal house cover of the old Frankie Beverley / Maze number Joy And Pain did the top 10 business in June. The tempo slides down with Gladys Knight’s sweeping Licence To Kill. The second Timothy Dalton Bond and the last film I saw in the Ritz cinema. Natalie Cole keeps her slow set ammunition for the sickly Miss You Like Crazy. Down to the last eight: Pet Shop Boys covered Sterling Void and added some of their own lyrics for the 10″ mix of It’s Alright:
“There’s a boy standing by a river,
There’s a girl lying with her lover,
There’s a statesman standing at a crossroads,
There’s a soldier polishing his gun”.

So there’s the bugs on 45 with Swing The Mood. I prefer Swing Out Sister with the driving kaleidoscope lounge of You On My Mind which reminds of those early 1970s solo Bacharach LPs. Bananarama’s ’89 update of Cruel Summer has the swing vibe while De La Soul’s anti-drug rap Say No Go is still one of hip hop’s freshest jams. Norman Cook was the other Housemartin. By that summer he was an internationally acclaimed DJ and remixer. Blame It On The Bassline features MC Wildski and is suitably frantic. Good times. “Keep the frequency low”. There’s just time for ska to mate with house as Double Trouble and The Rebel MC Just Keep Rockin’.

Ashley Abram’s use of The Cure’s Lullaby as Now 15’s closing track is a masterstroke. After the sweat-drenched acid house and hip hop, it’s time for a Balearic comedown.

Turn back the clock to 15 July 1989 and When The Cureheads invaded Ballsbridge.

An extract: By the time we left for the RDS the conditions were extremely hot and sticky. We walked up Sandymount Avenue and almost wilted. Black-clad, mascara-streaked and hairspray-soaked temples. Then we reached the top of the road and gasped. The Curehead army was marching through Ballsbridge. Our time had come; this was our day. We may have been marginalised in our respective hometowns but this was truly a gathering of the tribe. A number 18 bus swung around onto the main road; its occupants stared at us with a mixture of shock and probably pity.

Another extract: Finally it was time to get out of the searing sunshine and into the fiery, sweaty cauldron that was Simmonscourt. The atmosphere was highly-charged with expectation. I saw a number of guys standing at the side of the arena. They were inhaling Tippex in full view of the St John’s ambulance men. The first support act came on – Shelleyan Orphan – and gave us a competent set, Shatter was the highlight. It was still quite easy to get to a decent vantage point so I made my way towards the front. There were loads of Dead Kennedys Bedtime For Democracy t-shirts. All About Eve came next and Julianne Regan wore a see-through white dress. I thought she looked amazing. Martha’s Harbour and all that. The Cure finally came on stage to the chimes of Plainsong. Robert Smith sang those immortal opening lines
“I think it’s dark and it looks like rain”.

Saturday night and Sunday morning 19 / 20 August 1989: So the results were better than expected. I could now do what I wanted. The Road Taken. Another disco and walking home on Cloud Nine. The wee small hours. Turning on the radio and being shocked by the tragic news just in from London: a fatal collision between two rivercraft on the Thames. The pleasure boat Marchioness sank after being pushed under by the dredger Bowbelle near Cannon Street Railway Bridge. 51 lives lost.

“As I walked on with a heavy heart
Then a stone danced on the tide
And the song went on
Though the lights were gone”. (The Pogues – Lullaby Of London)

Lest we forget
Hue and Cry – Violently

Missing tracks and other thoughts
Now 15 continues the momentum set by Now That’s What I Call Music 14 and despite a rather lacklustre first disc, is still a decent selection. In a straight fight I would definitely bet on The Hits Album 10. Disc 1 would have been a much better listen if it contained some or all of these songs: 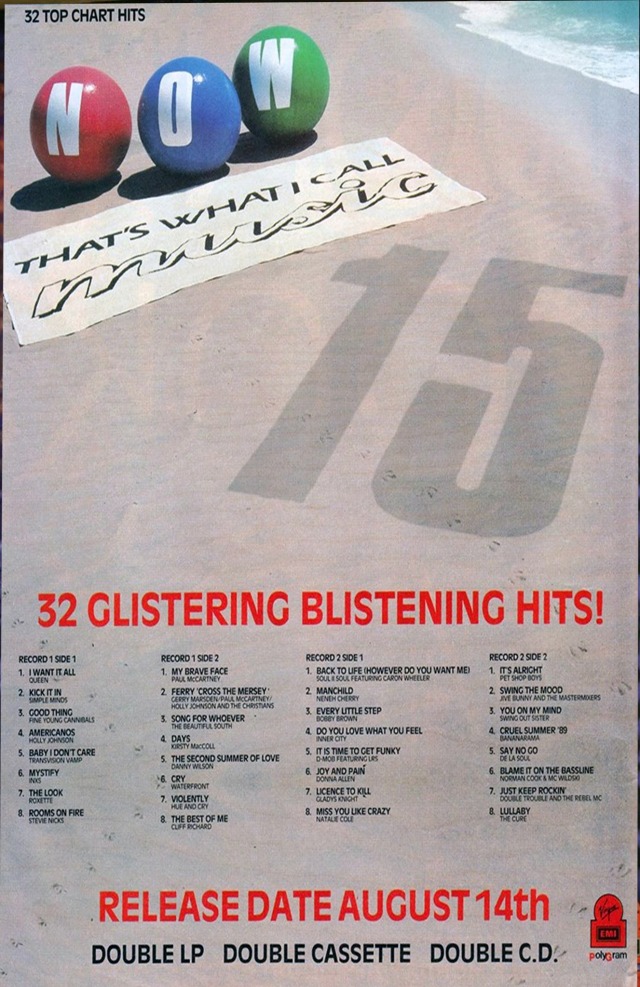