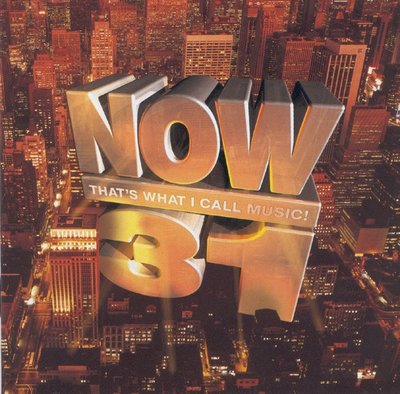 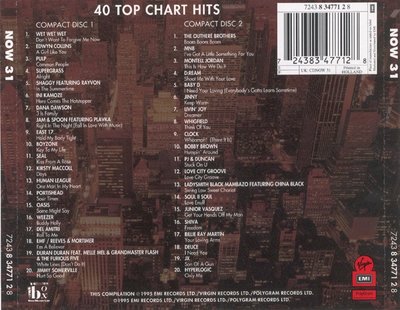 Cast your mind back to July 1995: Temperatures were high, rainfall was low and the sun shone every single day. Everything seemed bright – on the outside at least. Now That’s What I Call Music 31 was released at the end of the month and still stands as an invaluable document of the late spring / early summer chart sounds.

Picture This, the sixth album by Wet Wet Wet, is now staple of charity shops and car boot sales. Yet a four CD box set is in the works. The inoffensive Don’t Want To Forgive Me Now opens the proceedings, a kind of MOR Elvis Costello. We go up the junction via the hourglass for the next track, Edwyn Collins’ frazzled guitar-driven soul stomper A Girl Like You which bursts out like a blackhead in this company. Twist and turn to the sound of Pulp finally breaking on through after 15 years of trying. Common People is nifty and immense, a endless source of pleasure and driven by Jarvis Cocker’s deadpan delivery. A key moment in British popular music. Just smile and hold his hand as the ultimate tuneful summer anthem arrives: ladies and gentlemen, it’s Supergrass’ indie beamer Alright.

Movement 2: Shaggy and Rayvon’s remake of Mungo Jerry’s In The Summertime followed by Ini Kamoze’s fashion dancer Here Comes The Hotstepper – as featured in Pret-A-Porter. Hot tip time: Dana Dawson’s sunny 3 Is Family. And a song for Europe finally carves up the UK charts; Right In The Night from Jam and Spoon. Battle of the boybands comes into view as East 17 lay down Hold My Body Tight while Boyzone open up on Key To My Life. It’s a quick move to more serious stuff for it is Seal and he is singing Kiss From A Rose. You’ll remember it from the blockbusting Batman Forever. And it was a Sony camcorder advertisement that saw Kirsty MacColl’s Days re-enter the charts. Eagle-eyed readers will recall its inclusion on 1989’s Now That’s What I Call Music 15. Bless the light.

The Octopus machine continues to produce hits for The Human League. One Man In My Heart is stately electronic with real emotion. Next comes the cloudy claustrophobia of Portishead’s amazing Sour Times. And in the left corner we have Oasis with Some Might Say. The hits get bigger and bigger; a #1 smash on 30 April. Then there’s Weezer plying their toytown grunge on Buddy Holly. The Blue album and Pinkerton being top listens back then. Look at the right corner: the simple rock of Roll To Me from Del Amitri. Speed past Vic, Bob and EMF covering I’m A Believer. Disappointment haunted me when I heard Duran Duran’s gauche version of White Lines; however it’s much more enjoyable in 2015. CD1 concludes with a whimper as Jimmy Somerville turns Hurt So Gold into mellow gold.

Disc 2 sees us dancing to a different beat. Fact: 10 tracks on Now That’s What I Call Music 31 had already appeared on Now Dance – Summer ’95 which was released a couple of weeks earlier. So that means The Outhere Brothers drop in and drop out before MN8 sweet groover I’ve Got A Little Something For You. Meanwhile Montell Jordan’s This Is How We Do It plays like a heady street stepper. D:Ream race back into the top 10 with the anodyne Shoot Me With You Love. But much better is Baby D’s Everybody’s Got To Learn Sometime, drum ‘n’ bass carved from the 1980 Korgis tear-jerker. 1-2-3-4! Bruno Mars eat your heart out; it’s Jinny’s Keep Warm. Mix with Livin’ Joy’s Dreamer. Pure house bounce.

When I Think Of You was Whigfield’s third hit. A pleasant interlude before Clock’s furious Whoomph [a Tag Team cover] and Bobby Brown’s walloping Humpin’ Around. Thanks to K-Klass for the funk. PJ and Duncan get Stuck On You but there’s no AKA. Must be free. Elsewhere Love City Groove’s joyous feelgood rap didn’t endear them to the wider European public as the song ended up in 10th place at the Eurovision song contest for 1995. Next come China Black and Ladysmith Black Mambazo with a touching Swing Low, Sweet Chariot which was taken from the World In Union Anthems album. The Rugby World Cup started on 25 May and is most memorable for New Zealand’s 145-17 win against Japan on 4 June. Marc Ellis scored six tries. Ireland beat Wales 24-23 too.

By now Soul II Soul were on Volume V of their club classic sound. The Shankar-style Love Enuff does not disappoint. And neither does Junior Vasquez, troubling the charts for the first time on the wicked and monstrous Get Your Hands Off My Man. One in a million: Louise Dean, tragically killed in a road accident on 18 June 1995. She sang with Shiva and the uplifting Freedom is an enduring anthem that helps keep her memory alive. Next comes Billie Ray Martin’s shimmering synth pulsar Your Loving Arms and then Deuce’s uplifting and poppy I Need You which was also in the running for the UK Eurovision entry. Wind it up with JX’s rebooted Son Of A Gun. The final comedown is Hyperlogic’s euphoric Only Me with its memorable New Year’s Day sample. The sound of the crowd.

Lest we forget
Human League – One Man In My Heart

Missing tracks and other thoughts
Like an comfortable old shoe, Now That’s What I Call Music 31 delivers on a number of levels. The series was now chugging along at a comfortable and confident rhythm. The bumpy 23 – 25 era was fading away. Some suggestions for an even better experience:

Let Loose – Best In Me. Absolutely fabulous.
Shane McGowan and Sinéad O’Connor – Haunted. A Sid and Nancy moment. New joy.
Bjork – Army Of Me. Dancing in the dark.
Radiohead – Fake Plastic Trees. The Bends and the magic therein.
Foo Fighters – This Is A Call. A true love buzz.