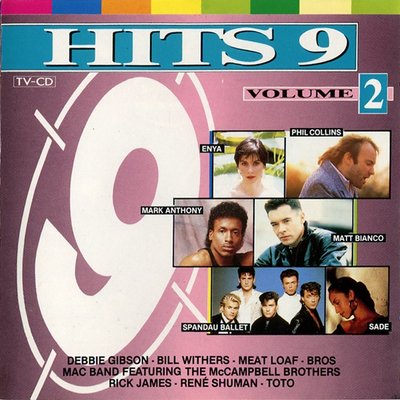 Review
The companion CD to Hits Album 9 – Volume 1. This was CBS and WEA’s only two-parter. The format’s price point in 1988 was still uncomfortably high with most shops’ CD selections being tiny in comparison with the number of LPs and cassettes offered for sale.

Of the 14 tracks, three had already featured on the UK series variant The Hits Album 8 [Matt Bianco, Bros, Sade]. Don’t Blame It On That Girl was faded earlier on the latter but it’s the proper single mix here. Likewise for Bros and their thrilling amusement arcade spinner I Owe You Nothing. Three more can be found on The Hits Album 9 [Debbie Gibson, Bill Withers, Enya] while Phil Collins’ mindbending A Groovy Kind Of Love turned up on Now That’s What I Call Music 13. And the song with the super violin beginning, Roses Are Bed, by the Mac Band was included on The Greatest Hits Of 1988.

Mark Anthony’s 1919 Main Street is overlong and overcooked urban funk. Spandau Ballet were hitting the commercial low point in 1988; the taut rhythms of Raw certainly deserve a reappraisal. Meanwhile Meat Loaf’s 1977 LP Bat Out Of Hell was still selling by the truckload in ’88 and Paradise By The Dashboard Light was reissued. The compilers miss an opportunity and include the album version rather than the 5:32 7″ edit. Elsewhere you get Rick James’ sparse funk Loosey’s Rap and Rene Shuman’s mournful Cause You’re Not Here. However the most atmospheric award goes to the pioneering Toto; the melodically perfect Mushanga, here in its 4:51 Special Version.

Favourite tracks
Bros – I Owe You Nothing

Lest we forget
Spandau Ballet – Raw

This entry was posted in Hits Album (Dutch). Bookmark the permalink.