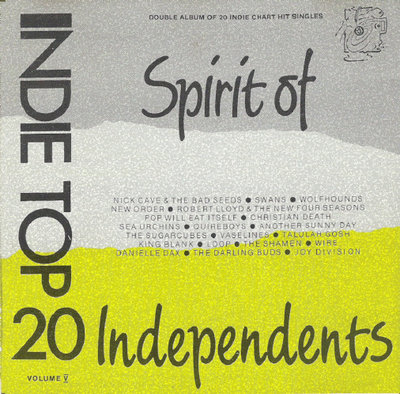 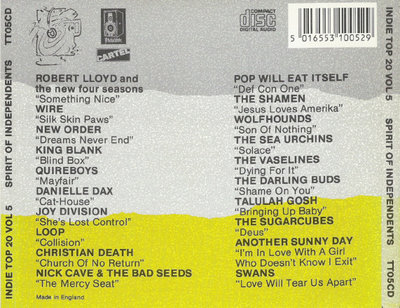 Review
Indie Top 20 reverted to normality for its fifth instalment. One volume spread across a double LP, cassette and finally, CD. Unlike some of the later releases, CD buyers got the full complement of 20 tracks and the tagline was now “Spirit of Independents.” The insert was a flimsy single card with design credited to Wyke Studios in Normandy, Guildford.

While the Pooh Sticks would be On Tape, ex-Nightingale, Robert Lloyd’s latest musical venture came out on the In Tape label. He was joined by the elusive New Four Seasons as his backing band. Something Nice was released on 7″ and 12″ with the latter containing a mix that went on for nine hypnotic minutes. We get the more concise 7″ edit, a driving almost bouncy stomper which reached #21 on Peel’s Festive 50. Round about that time, pizzas were becoming a thing in Ireland. The Four Star Pizza chain kicked off in 1986 while a fair selection of our capital’s restaurants and cafés had been serving them for some time – read about it in this outstandingly ace recollection called Dublin’s first pizzerias.

Wire formed in 1976, disbanded in 1980, reformed in 1985, broke up again in 1992 and reformed for the second time in 2000. They also played Ireland that February. Silk Skin Paws is the second track here; another single from the enigmatic A Bell Is A Cup Until It is Struck. Horse’s head and filing cabinet. The sedate fighting the lethargic. The single’s 12″ sticker said “specially priced mini-album for the Wire connoisseur.” Three versions:
Album 4:51
7″ 4:23
12″ 5:43
We get the shortest one. Highlight of the album was possibly The Queen Of Ur And The King Of Um. Listen to that mesmerising description of a journey through London: “A babbling gaggle of scrabbling rabble fighting invitations to the emperor’s shilling.”

“Wire may have broken its golden rule but make no mistake; there wasn’t a whiff of nostalgia. Nothing was lovingly recreated in every detail—the songs have been reworked, brought up-to-date, kept vital and relevant. I think it’s because Wire was so ‘out of time’ (in the positive sense), that the songs remain fresh.” (Fergus Kelly) 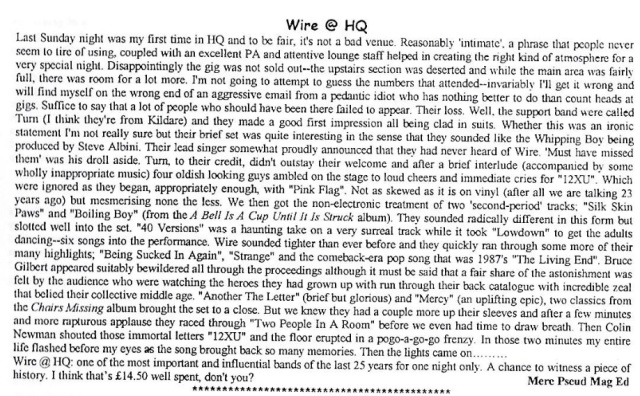 Flogging a dead horse, here come the young men (again). Time for two more Peel session tracks from New Order and Joy Division. Dreams Never End AKA the only good tune on Movement sounds urgent here with Peter Hook on vocals. Serious shades of In Between Days. Meanwhile She’s Lost Control dates from January 1979, the first recording of the song. Joy Division would release a more polished version on Unknown Pleasures while the 1980 re-recording all beefed-up and a extra verse remains the definitive version. Find it on the Atmosphere 12″ and play loud. Next come the shadowy King Blank and the so-so menace of Blind Box. And in a bit of what you fancy, we go back to what sounds like 1973 and the Faces-aping sound of The Quireboys. They sing of Mayfair, the most expensive dark blue property in the UK version of Monopoly. Land on it with a hotel – £2,000.

On Awesome Records, Danielle Dax and Cat-House. A molten mix of goth and glam, all bound together with a searing groove and killer guitar solo. I’d love to have seen her live, maybe supporting The Cramps in a cavern like Crawdaddy. It’s followed by the hypnotic sludge of Loop’s Collision, one of the finest examples of repetitive space rock that you’ll ever here. I remember their album Fade Out getting 4/10 in the NME around the same time. I was pleasantly surprised when I played, especially the glorious This Is Where You End. “Endless smiles to: Sun Carriage, Sowing Seeds.” So take the drums from This Corrosion and an overbearing need to shock and you have a fair idea of what Christian Death’s Church Of No Return sounds like. Moving swiftly on, we reach the halfway point with Nick Cave & The Bad Seeds and The Mercy Seat. Brilliant, dark, pounding, menacing regret laced with murderous defiance. Absolutely relentless; Alice Kirbyson “a total desperate mess of overwhelming dark noise.” Just don’t confuse it with Ultra Vivid Scene.
“When I’m in the Mercy Seat
I smile and lay my weapons down”

Big Mac, fries to go. Pop Will Eat Itself make it five appearances on five volumes with the crunchy samplefest Def Con One. “We love you all.” Nifty Twilight Zone clip. More religion-bashing next with The Shamen’s Jesus Loves Amerika, where the focus is on television evangelists – similar to The Hooters’ Satellite which I mentioned in The Chart Show – Rock The Nation. In Gorbachev We Trust was a popular fixture on my turntable then, and even more show after seeing their spectacular live performance on 17 March 1989. Elsewhere The Wolfhounds drop the brittle wah-wah Son Of Nothing – to write home about. Pop justice is restored with the gorgeous harmonies of The Sea Urchins, Sarah Records stars and their amazing Solace. Described as “aggressively dreamy” on Indie Top 20 – The Blog! which expertly sums it up. Equally fiery with a sensitive centre – The Vaselines’ second 45 Dying For It appears next. It’s an abrasive number with two seminal B-sides, Molly’s Lips and Jesus Wants Me For A Sunbeam. Manic Nirvana.

I remember an NME front cover that had three great hopes for the upcoming year: The House Of Love, The Wonder Stuff and The Darling Buds. The latter’s Shame On You zips by in just two minutes; a sidewalking Primitives. Not quite as frenzied, Talulah Gosh and the smashing screwball that is Bringing Up Baby. The end was nigh; just one more single would follow. Just setting out on the (blue-eyed) pop road were The Sugarcubes; Deus is the band at their most B52s-ish. Einar’s interjections work for me but your mileage may vary. We’re back to the Sarah stable for the penultimate track, Another Sunny Day intense I’m In Love With A Girl Who Doesn’t Know I Exist which is all over in a mere 90 seconds. End: it’s back to the unruly ghouls of Manchester streets – a cover of Joy Division’s Love Will Tear Us Apart courtesy of The Swans. They recorded two versions – one sung by Michael Gira, the other by Jarboe (included here). A considered and calm finale.

Lest we forget
Robert Lloyd & The New Four Seasons – Something Nice