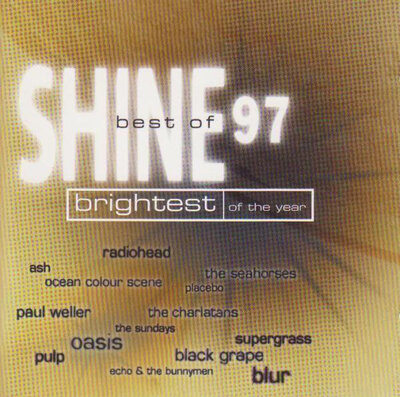 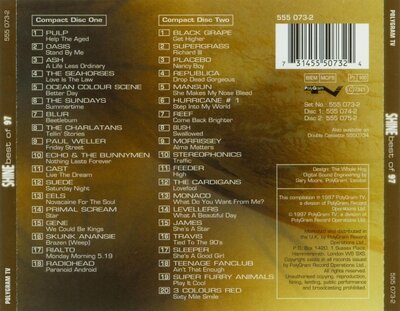 Review
As 1997 drew to a close, Polygram TV decided against a tenth numbered volume of their Shine series and instead gave us a compilation marketed as “Brightest Of The Year” – known as Shine Best Of ’97. As there were only two Shines released that year, the majority of the tracks (24) were *new* with the remaining 14 lifted from:
Shine 6: The Cardigans – Lovefool (this 45 was reissued in 1997)
Shine 8: Blur – Beetlebum, Eels – Novacaine For The Soul, Gene – We Could Be Kings, Placebo – Nancy Boy, Bush – Swallowed, Monaco – What Do You Want From Me, James – She’s A Star, 3 Colours Red – Sixty Mile Smile
Shine 9: Echo & The Bunnymen – Nothing Lasts Forever, Radiohead – Paranoid Android, Republica – Drop Dead Gorgeous, Reef – Come Back Better, Levellers – A Beautiful Day

The next phase of Pulp began in November with the release of Help The Aged. Guitar man, Russell Senior was not a fan and tried to stop it coming out. He then left the band. As with so many of Pulp’s songs, it has a grubby, almost seedy feel. The music video was set in the nursing home (not to be confused with a nurses home) and further enhances this theory. Having said that, it ushers in the new world of This Is Hardcore very effectively and remains once of their most enduring and thoughtful numbers. Meanwhile Oasis and Stand By Me makes me think of what might have been in the Champions League Final of 2021. And in way so does the next tune, Ash’s soaring A Life Less Ordinary. While the searing disappointments of 1981 (Tommy Hutchinson scoring for both sides) and David Pleat’s 1983 jig loomed large for many years, the new found success has created almost ridiculous expectations. Dropping down a gear with The Seahorses’ melodic Love Is The Law.

Marching on, Ocean Colour Scene’s Better Day plays like a gut-puncher now, a touching reminder of the carefree new Labour optimism, the last party etc. It’s followed by the somewhat surprising return of The Sundays with Summertime; as I write this, May has finally brought sunshine but as I recall, the single came out in the autumn. I still have my red vinyl 7″. The pursuit of happiness. Next are The Charlatans, getting bolder and better with album #5, Tellin’ Stories gathering many plaudits. The affecting title track is here, perfect for park days and kickabouts. Jon Brookes and Rob Collins sadly missed. Pairing off with it is Paul Weller with the classic mod groove of Friday Street, the sound of after work pints. And then Cast with the hazy Live The Dream while Suede’s Saturday Night perfectly captures socialising pressures. Marcus Backman: “The song and video clip are perfect at evoking the underlying desperation and sadness in all of our lives, which we often mask when we go out. I think the video works really well at displaying the different lives of the population – it makes you think about what their night has held for them.”

Primal Scream’s Vanishing Point remains my favourite LP of the year, beating off stiff competition from Radiohead, U2, The Fall & Morrissey. Star is very laid back, almost trip hop in vibes but with a beating mellow, soulful heart. Even Skunk Anansie can’t spoil the heart as the emotional and well-pitched Brazen is a cut above their usual turgid anger rock. From the ashes of Kinky Machine came Rialto. Monday Morning 5.19 is superb, a harrowing tale of love gone wrong, something awry that remains unresolved. Plus we get the shorter single edit, more taut and makes a better impact. This excellently sequenced first disc comes to a dramatic conclusion with Paranoid Android: “I love how on every comment section of 90s cult rock songs there’s some guy writing a nostalgic paragraph about the first time they listened to it.” is how some infantile cynic might describe it.

“A calculatedly offensive gesture almost beautiful in the perfection of its simplicity.”
So said the NME about Black Grape’s second LP, Stupid Stupid Stupid. While lacking the charm of the debut, the single included here – Get Higher – is mildly interesting with its Ron & Nancy drug references. Next the furious mod smash ‘n’ grabber Richard III by Supergrass before Mansun’s arresting She Makes My Nose Bleed. Elsewhere Andy Bell left Ride for newer pastures in Hurricane #1; Step Into My World is her in its original album version rather than the Perfecto Edit. I prefer this take, a world weary yet youthfully optimistic number that’s worthy of the praise “Best Oasis song by a band that’s not Oasis”

Morrissey’s sixth album – the uneven Maladjusted – was promoted by Alma Matters, released one week before the LP in the tumultuous July 1997. Backed with Heir Apparent and I Can Have Both, two superb B-sides, Alma manages to be catchy, nostalgic and glorious all at the same time. And no, nothing to do with Coronation Street. The six track Japanese CD Rare Tracks is a wonderful journey through the singles’ flips and the album reissue really benefits from Moz’s revised running order. Moro Scode remembers The Stereophonics and Traffic – “You know that summer we all have when we look back on our memories? That summer when we were younger, more carefree…when something amazing happened, the kind of memory that makes you smile from the inside when you recall it? This song is on the soundtrack to my ‘that summer’.” You could say the same about Feeder’s High, a real hang out tune that benefits now from lack of exposure.

Travis’ upbeat Tied To The ’90s sounds a lot like Thom Yorke fronting a looser rhythm section while some might say Sleeper’s She’s A Good Girl is a lost Bond theme. To me, it marked a slide downwards and wasn’t the best choice for a lead single. And immediately after being knocked down, Teenage Fanclub get us up again with the wonderfully joyful harmonious Ain’t That Enough. The Byrd dreams of Olympus Mons, very much like one sun-drenched chorus after another. We’re not finished yet; the Super Furry Animals are still in top gear with the sparkling prog pop Play It Cool. And that, ladies and gentlemen, is why I think Shine Best Of ’97 is the strongest instalment of their entire series.

Hurricane #1 – Step Into My World

Lest we forget
Rialto – Monday Morning 5.19