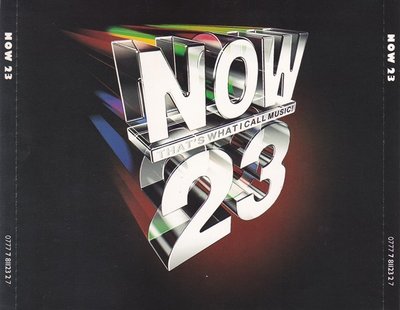 Review
“Everything you are about to see and read is a fantasy, a dream, pretend”.

Sex: wrapped and sealed in a polyethylene terephthalate Mylar bag. 128 pages. Spiral bound with an aluminium cover that has the word “Sex” stamped in the middle and a warning label. The front page also shows Madonna against a sky blue backdrop. The metal cover was inspired by Public Image Limited. £25 in Easons. Thank you maestro.

Sleeping Satellite became Tasmin Archer’s debut single. It was released on 31 August 1992 and had reached the top spot by 11 October. Inspired by the moon landings, it remains one of the decade’s most enduring one-offs and is a perfect opener to Now That’s What I Call Music 23. Singing in the rain; Jon Secada’s Just Another Day prolongs the uplifting and soulful vibe with its gentle piano-led melody. The debut 45 theme continues on Charles and Eddie’s gentle R&B driver Would I Lie To You? And the mystery of Shake Your Head is compounded even further. Two versions of the Was (Not Was) track had already appeared on Now Dance ’92 with a third popping up here. This one is longer than the original single mix and has an extra verse.

Jah rule: Bob Marley got a posthumous career retrospective – Songs Of Freedom – and the previously unavailable Iron Lion Zion was given a modern remix to push into the UK top five. Also making waves were Go West and the expertly-crafted Faithful which ensured that the Indian Summer album was their most successful. Meanwhile Too Funky ended up being George Michael’s last single for Sony and was donated to the Red Hot + Dance AIDS awareness project. Our feet stay firmly on the floor for Arrested Development’s hip hop inversion People Everyday which was based on Sly and The Family Stone’s 1969 classic Everyday People. Kick up the treble tone. The laid back tempo continues with Simply Red’s sweetie For Your Babies and Erma Franklin’s jeans-busting (Take A Little) Piece Of My Heart. And then derailment. . .

Wrecking ball: Brian May’s overwrought Too Much Love Will Kill You, Simple Minds’ admittedly decent Alive And Kicking [already on Now That’s What I Call Music 6 so why not Love Song?], John Lee Hooker’s repetitive Boom Boom [another trouser advert], Billy Ray Cyrus’ dire Achy Breaky Heart and Little Angels’ sub-par Bryan Adams rocker Too Much Too Young. The reckless man on backing vocals. An attempt to stem the blood flow is made by Richard Marx on Take This Heart. It’s no Hazard. Finally a breakthrough from the unlikeliest of bands – Genesis and the televangelist-slamming Jesus He Knows Me. We Can’t Dance was their last LP with Phil Collins and is overdue a re-appraisal. We go down under for the final pair: INXS whimper on with the bland Baby Don’t Cry while Crowded House’s It’s Only Natural is easily their worst single to date. Glad it’s all over.

Pop! The First 20 Hits saw Erasure compile their singles to date. A remix of the very first one – Who Needs Love Like That – was released as a tie-in. Now 23’s third number one comes from The Shamen. This version of Ebeneezer Goode appears to have been lifted from the aforementioned Now Dance ’92 with its partial-mixing. As a result, right at the start, it features the final ‘boom’ from the end of House of Love, which preceded it on the compilation, plus an early fade to avoid capturing the start of Something Good by Utah Saints, which followed it. Rage’s urban dance of Run To You and Bizarre Inc’s corking I’m Gonna Get You keep the party pumping while Heaven 17’s Temptation (Brothers In Rhythm Remix Edit) is a real treat; a stylish update of the seminal 1983 original. Closer.

Still: Here come the young men – East 17 – with the pounding House Of Love. Rivals Take That; The Beatles And The Stones. Ruby Trax throws up another curveball with The Farm’s somewhat leaden cover of Don’t You Want Me while Undercover continue mining 1978 for inspiration on the wistful Never Let Her Slip Away [original by Andrew Gold]. Nintendo time: Doctor Spin was a pseudonym used by Andrew Lloyd Webber and record producer Nigel Wright for their hit single Tetris, a Eurodance cover version of the most famous tune [an instrumental version of the Russian folk song Korobeiniki] in the Game Boy version of the game Tetris. Its success meant that the Ambassadors of Funk and MC Mario released a record based on the music from World 1-1 titled Super Mario Land. The Ambassadors hailed from Texas and it’s a genius decision to put both tracks together.

Roxette lead the charge with the charming How Do You Do? It’s followed by ABBA’s positively desperate Dancing Queen; released to promote Gold: Greatest Hits. And in more supreme sequencing, Björn Again pop up again with their super take on Erasure’s A Little Respect. Vanessa Paradis returns, all grown up, with Be My Baby while Betty Boo steals the summer on Let Me Take You There. Banned in the USA: the video for Sophie B. Hawkins’ epic Damn I Wish I Was You Lover. Nifty When The Levee Breaks break. To death row: Peter Gabriel looked towards capital punishment for Digging In The Dirt, his first single since ’87. The world music vibe continues with Enya’s magical Book Of Days before winding down on Roy Orbison and kd lang’s “duet”, Crying. The 1992 Olympics were held in Barcelona and once again, Freddie Mercury and Monsterrat Caballé’s collaboration was blasted all over the world. It opened Now That’s What I Call Music 10 and, somewhat fittingly, was chosen as the finale here.

“Love kills, drills you through your heart
Love kills, scars you from the start”.

Sophie B. Hawkins – Damn, I Wish I Was Your Lover

Betty Boo – Let Me Take You There

Lest we forget
Björn Again – A Little Respect

Missing tracks and other thoughts
Not a vintage edition. CD1 is truly a disc of contrasts; a pleasant and relaxed first half with a turgid run from tracks 11 to 19. Thankfully disc 2 is a much better prospect. Although these could have enhanced the overall experience.

Felix – Don’t You Want Me. Forget The Farm. Find on the Dutch CD Now Dance 2.
Paul Weller – Uh Huh Oh Yeh. Flying solo.
R.E.M. – Drive. First blood on the austere Automatic For The People.
The Cure – A Letter To Elise. Make it three in a row for the Wish 45s.
The Orb – Assassin. Ever-growing and pulsating.